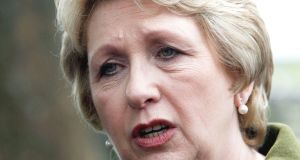 Mary McAleese: why was a past president of Ireland, a practising Catholic, banned from addressing a meeting of Catholic women in the headquarters of Catholicism? Photograph: Brian Lawless/PA

The invitation to the 2018 International Women’s Day meeting of the Voice of Faith conference to be held in the Vatican in Rome on March 8th reads: “We live in time marked by change, but there are places where gender equality is being systematically overlooked. The Catholic Church is one of them.”

Among the panellists invited to address the issue of why the Church is so slow in recognising that women have the “expertise, skills and gifts to play full leadership roles” was the former president of Ireland, Mary McAleese. So far, so uncontroversial, one would think. Dr McAleese, a Catholic, a canon lawyer, well-known to the hierarchy in the Vatican where she visited as president, has had things to say about the secondary position of women in the church, as have many women within the church.

She did play a prominent role in the 2015 marriage equality referendum when she spoke movingly of her son Justin and the difficulties he faced as a gay man and a Catholic within a church that rejects homosexuality. However, this conference, given the theme, would be a space to address the role of women in the church, a theme McAleese is eminently qualified to address.

As is customary practice, when such an event is taking place in the Vatican, the list of invited conference speakers was submitted to Cardinal Kevin Farrell, a native Dubliner, who is currently Prefect of the Congregation for Laity, Family and Life. He returned the list to the organiser, Chantal Götz of the Catholic Fidel Götz Foundation, with three names removed, including that of McAleese. Götz was understandably dismayed but Farrell was unyielding. McAleese, Ssenfuka Joanita Warry, a Ugandan LGBT activist, and Zuzanna Radzik, a Polish theologian specialising in Christian-Jewish relations, remained forbidden from participating.

After all efforts to negotiate with Cardinal Farrell failed, Götz and the foundation took the decision to move the conference venue to the nearby Jesuit Aula, still in Rome, but outside the walls of the Vatican State. McAleese is no longer a panellist, she is now invited to give the opening keynote to the gathering on March 8th on the theme, Time is Now for Change in the Catholic Church.

Was all this yet another storm in the patriarchal, hierarchal teacup that is the Vatican? The Irish hierarchy seems to have washed its hands of the whole incident, despite suggestions from some Vatican-watchers that Cardinal Farrell would not have made his decision without consulting his episcopal colleagues in Ireland. Archbishop Diarmuid Martin in Dublin, however, says the first he knew of it was from McAleese herself. So why was a past president of Ireland, a practising Catholic, banned from addressing a meeting of Catholic women from all round the world in the headquarters of Catholicism? Why would the presence of Mary McAleese on a panel so exercise the cardinal that he was moved to ban her?

Could it be because of her support for same-sex marriage in the 2015 referendum, or could it be due to her support of the ordination of women? Catholic women like McAleese, working within the institution have, for decades, being calling – politely and reasonably – for change in the rigid, male-dominated, institutional church. However, despite some symbolic transformation, there remains an implacable resistance to true women’s equality within the church.

McAleese is no longer a panellist, she is now invited to give the opening keynote to the gathering on March 8th on the theme, Time is Now for Change in the Catholic Church

Speakers at the Voice of Faith conference over the past four years have come together to celebrate the work that Catholic women, religious and lay, do all over the world in education, in healthcare, campaigning for workers’ rights, helping migrants and asylum seekers, etc. As a matter of strategy, they have tended to avoid controversial issues such as the ordination of women. As Götz has said previously, “I just have to be very careful regarding the Vatican and the way we go forward, I want to have them in the boat.” However, it must be noted, few members of the Vatican hierarchy, and certainly not the pope, have attended this conference in previous years, so, in essence, the women were talking to and about themselves. Despite this softly, softly approach, Voices for Faith now finds that once a cardinal casts a disapproving eye on their list of speakers, there is no negotiation, no compromise.

The insider Catholic women of Voice of Faith may just now have met with the brick wall of Vatican non-negotiation, but many women in Catholic Ireland have met this hard wall in recent years. Marie Collins, a survivor of clerical sex abuse, resigned from Pope Francis’s commission on clerical abuse because senior clerics put “other concerns” before the safety of children. Survivors of Magdalen Laundries and Mother and Baby Homes campaigned for decades before having their voices heard. And it was the State and secular society who heard those voices, who offered apologies and restitution. The church, through the religious orders, continues to withhold direct, open access to records of these institutions, still has not paid its part in restitution costs, and oftentimes still denies or is silent about the trauma and suffering that happened at its hands. If the hierarchical church can attempt to silence and marginalise women who are insiders, how much more are they likely to silence and marginalise those on the outside.

Perhaps her speech, and the issues the attendees discuss, will get more publicity than usual because of the actions of Cardinal Farrell

The controversy of the Voice of Faith conference will inevitably die down. Mary McAleese will address the conference in Rome on March 8th, and perhaps her speech, and the issues the attendees discuss, will get more publicity than usual because of the actions of Cardinal Farrell. None of this will likely bother the cardinal; he is busy with plans for the World Meeting of Families to be held in Dublin in August. Already he is believed to have made his mark on this, demanding the images of same-sex families be removed from pre-conference publicity materials. Controlling what women say and defining what image of the family is acceptable is still what the Vatican and the institutional church does; it is the reaction of the laity that has changed. How long before the Catholic Church recognises this is anyone’s guess.

1 Larger retail stores to reopen on Monday ahead of schedule
2 Donald Trump is in trouble, and that could spell very bad news
3 Taoiseach says €350 pandemic payment to be cut for some part-time workers
4 O’Doherty and Waters ordered to pay legal costs of case against State over Covid-19 laws
5 August the right time for primary schools to reopen
Real news has value SUBSCRIBE