Anyone expecting the German leader, even politically diminished, to roll over for Emmanuel Macron has unrealistic expectations 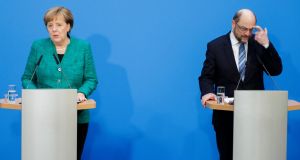 To win over the Social Democrats and secure a fourth term as chancellor, Angela Merkel has surrendered to the key finance, foreign and labour portfolios to the SPD, led by Martin Schulz. Photograph: Carsten Koall/Getty Images

Angela Merkel is nobody’s fool. After Germany’s federal election, way back in September, the chancellor looked on with interest as Social Democrat (SPD) leader Martin Schulz, in the job six months, ruled out taking his party back into power. On live television, wearing a thunderous expression, he insisted that he would never sit at a Merkel cabinet table.

The German leader’s reply: never say never. She said drily she had no doubt that everyone would live up to their responsibility. Some 19 weeks and several portions of humble pie later, Schulz now hopes to end his career as foreign minister in a third grand coalition under Merkel.

Everything still hinges on whether a majority of 460,000 SPD members back Wednesday’s coalition deal in a postal vote. To win them over, and secure a fourth term, Merkel has surrendered to the SPD the key finance, foreign and labour portfolios. Burying the Schäuble era of balanced budgets and minimal investment, Merkel IV promises to spend close to €50 billion on welfare, housing, education and infrastructure. After years of blocking efforts at EU level for greater fiscal stimulus and spending, the SPD has used its leverage to bring Merkel around to ideas floated by French president Emmanuel Macron.

Angela Merkel knows that this coalition package has tested her own political allies to the limit. They no longer fear her

The Berlin coalition deal commits to transforming the ESM bailout fund into a European Monetary Fund and, significantly, Berlin backs moving the multi-billion fund from intergovernmental to Brussels control, under EU law. French euro reform ambitions are boosted, too, by Berlin readiness for a targeted budget to reward structural reform. But anyone expecting the German leader, even politically diminished, to roll over for Emmanuel Macron has unrealistic expectations.

The ESM overhaul and reform rewards are proposals Merkel has herself floated in the past. Meanwhile the Berlin coalition deal gives his final key proposal, for a permanent EU investment budget, a definite maybe. Angela Merkel knows that this coalition package has tested her own political allies to the limit. They no longer fear her and will revolt against anything – monetary fund or investment budget – that looks like a permanent transfer mechanism from Berlin to the periphery. Martin Schulz preens in public about regular phone calls from the Élysée Palace, but Berlin’s EU power doesn’t rest in the foreign ministry but the chancellery and finance ministry.

The new landlord there is likely to be Olaf Scholz, an SPD conservative and pragmatist who speaks Merkel’s language on budget stability – and moral hazard. If SPD members give their blessing, a new era looms in European politics. In her 18 years as her party’s leader, Merkel has evolved from neo-liberal to centrist and now, in her last act, a pivot towards the expansionist centre-left. But, unlike Martin Schulz, Angela Merkel is not one for painting herself into a corner.