Suleimani killing of zero benefit to Iran, Middle East or US

Assassination only likely to aid Iranian hard-liners and impeached Trump 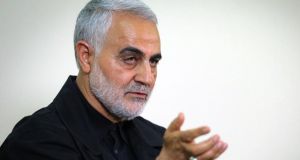 Qassem Suleimani became a symbol of a wider network of Iranian ambition across the Middle East. That network remains structurally unchanged by his murder.

Donald Trump’s decision to kill Qassem Suleimani has opened a Pandora’s box. Giving the command to target Suleimani was a momentous act, apparently undertaken rashly. Some analysts anticipate the Iranian response to manifest in time with attacks on US interests in third-party countries, for example, Saudi Arabia or the United Arab Emirates.

Such predictions of irregular and extended strikes on external diplomatic assets or economic interests are less dramatic than the sense that this singular action has now immediately embroiled the US in a hot war with Iran. The carefully negotiated 2015 Joint Comprehensive Plan of Action (JCPOA) addressing Iran’s nuclear programme, which was already unravelling due to US withdrawal in 2018, is another casualty of this strike. After months of edging away from the plan under the pressure of US sanctions, Iran has now declared more strongly that it will no longer abide by the JCPOA restrictions on uranium enrichment that were put in place.

Large crowds of mourners in Iran demonstrate the gathering effect that Suleimani’s death has had on national sentiment in a country with divided internal politics. Described by many as the indispensable and quintessential soldier of the Iranian regime, Suleimani did have supporters in Iran spanning a fairly wide spectrum of society. They included, most obviously, conservatives close to Iran’s supreme leader, Ayatollah Ali Khamenei, but also some reformist voices, as well as many young Iranians, who saw him as a national hero.

The state-controlled national media painted him as a superhero, and this strike will only help to solidify and extend the influence of the hard-liners in Iran who would embrace his legacy of covert and overt actions in places ranging from Syria to Lebanon to Yemen to Iraq. These helped buttress a narrative that styled him as an epic and singular figure. An Iranian video game Kaboos-e Doshman (Nightmare of the Enemy) even has Suleimani as a main character. In it, Suleimani presents as an ultra-masculine fighter in a particularly Iranian way: he is portrayed less as Arnold Schwarzenegger than as the unapologetic and aging avatar of 1979. For a significant section of the Iranian populace, Suleimani was a relatable fighter still comfortable in the thread-worn uniform of religious rhetoric and national fervour.

Suleimani was no indispensable figure; indeed, his replacement has already been announced

However, while a significant asset to the Islamic Republic through years of violent contributions to Iran’s regional designs, Suleimani was no indispensable figure; indeed, his replacement has already been announced. Rather, he became symbol and cipher of a wider network of Iranian ambition across the Middle East. That network remains structurally unchanged by this strike, even as it had been challenged recently by popular protests in Lebanon, Iraq and Iran.

In seeking to erase such a symbol of the regime the US only amplified Suleimani’s influence in a prominent cult of martyrdom in Iran. If anything, strategically the strike likely aids the potential recovery of the Islamic State (Isis) in Iraq, against whom Suleimani had been one of the more effective bulwarks. Certainly, it further marginalises advocates of diplomacy and reform in Iran.

A US presidential administration has yet again ceded moral ground by pursuing targeted assassination in violation of jus ad bellum (“right to war”) norms set out in the UN charter, to say nothing of violating the norms and laws of its own democratic system. Additionally, the subsequent threats of cultural destruction and disproportionate retaliation now emanating from the US executive branch underscore the pure barbarism of the moment.

Suleimani was also deeply unpopular with many Iranians. Having left school at 13 to work and support his family, Suleimani joined the sepah-e pasdaran (Islamic revolutionary guard corps) and had been deeply insinuated in their operations from the time of the Iran-Iraq war. The sepah were most recently responsible for the deaths of hundreds of Iranian civilians in the protests that spread across Iran at the end of 2019.

Against such repression of Iranian civil society, Suleimani and the martial culture he advanced in other countries as head of the sepah’s al-Quds unit was a reminder of the continuing injustice of political executions as a tool of Iranian policy. Many Iranians, alongside many Iraqis and Syrians, are of course relieved by the fact of his death. However, any suggestion that this extrajudicial execution will in turn substantially benefit Iranians, the greater Middle East or even significantly advance US security is historically tone deaf. Most immediately it can only be said this strike benefits an embattled US president struggling against impeachment proceedings and looking towards re-election.

In the midst of this, Iraq continues to suffer as the site of imperious overreach. The presence of both US and Iranian actors there demonstrates the way in which the tragedy of the Iraq war persistently unfolds and yields new problems. Meanwhile, many Iranians now anxiously anticipate the possibility of further violence, even as they also continue to endure the effects of US sanctions. It would have been better for Suleimani to have been brought to justice before an international tribunal for his crimes. In this world, it is increasingly hard to imagine such a possibility as an option. Still, we must try.