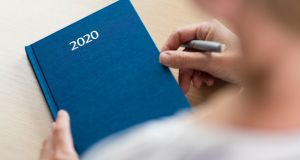 Every New Year’s Eve I crack open my new diary on the very last page and write down a list of things I want to achieve in the year ahead. It’s a complete cliche, but it works for me. Then I spend the year looking back at it, reminding myself of where I want to go and ticking off what I get done along the way.

It was a tradition I started this time 10 years ago, when I was entering into the second half of my Leaving Cert year. Our history teacher at St Nathy’s College in Ballaghaderreen, Co Roscommon asked us all to write a letter to our future selves, seal it and put our home address on the envelope.

He promised to post them out to us years later, when we were least expecting it. It’s been a decade now, and to be honest Mr McGhee, I’m not really expecting it to arrive anymore.

It was a genius idea really – asking a gang of self-obsessed teenagers to spend a whole class writing about themselves. Then again, Mr McGhee was one of those excellent teachers who really understood teenagers; he knew how to motivate us, inspire us and show us the value of hard work.

At the ripe old age of 17, I felt very much like a big fish in a small pond and I remember very distinctly writing about how happy I was.

It seemed I had come a long way from the flaky Maybelline foundation, the fear of not being tapped on the shoulder to “go with” someone at the disco, and the humiliation of not knowing who to sit with at lunch.

There had been some tough years at St Nathy’s where I had struggled to find my place among the hierarchy of adolescence. I wasn’t sporty, I didn’t smoke, I didn’t play music and although I did well academically, I was far from the top of my class.

Writing that letter, though, I was comfortable with myself and where I had gotten myself to. I had succeeded in securing a group of like-minded and equally innocent friends.

On one of our last days in school, about 15 of us decided to go mitching down by the river Lung, only to return to school a few hours later because we didn’t want to miss English; a short-lived attempt at being disaffected youths.

The finish line was close for us. As the long dark nights spent bent over a desk gave way to brighter evenings I began to look forward to leaving home, going to college, drinking legally, and maybe even driving a car.

Fast forward 10 years and I don’t think I could ever have imagined how far I would come, and how unsettling and difficult that road might sometimes be.

Arts in University College Dublin would prove every bit as daunting as I’d heard, weekend jobs in grocery shops came with unpleasant encounters, and friendship breakdowns would hurt me so deeply I thought I might never get over the insecurity or guilt left behind.

Most importantly of all, I would learn how to be happy again. How to feel fulfilled, how to overcome obstacles

Equally, I could never have foreseen the joy that lay ahead of me in that decade – the people I had yet to meet who would walk by my side through thick and thin.

I would get a job at a national newspaper, buy my first car, and then my first house.

I would see the Grand Canyon, the Golden Gate Bridge, Sydney Harbour and Milford Sound. I would take up running in the Phoenix Park, climb mountains in New Zealand and join a football club in Dublin.

Most importantly of all, I would learn how to be happy again. How to feel fulfilled, how to overcome obstacles, how to ask for help and know when to say sorry. Once again, I would feel like the big fish in a small pond – though much more resilient and humble than before.

This year, my letter-writing Leaving Cert friends and I organised a kind of reunion weekend in Lahinch, and I don’t think I’ve never laughed as much in 48 hours as we did on those days in June.

We played drinking games while watching Love Island, listened to Starman at sunrise and heard of the exploits of a doctor among us who spent an internship in the urology department. That story, like so many others from the decade that’s been, cannot be printed.

If you’re reading this in 10 years though, Niamh, just remember: you were so happy. Those people who shaped you never really left, and the place that made you will always be there to welcome you back.

Change will soon become familiar, challenges will strengthen you and laughter will breathe life into you. Embrace them all, because 10 years won’t be long passing by – Mr McGhee can vouch for that I’m sure.