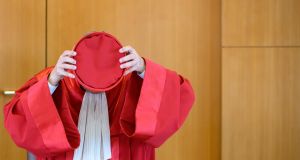 Generations of red-robed constitutional judges in Karlsruhe have, in their “Solange” rulings, given their qualified backing for EU law.

“Solange’s Revenge” may sound like a bodice-ripping French historical romance novel in the Angélique mould, but it describes succinctly a recent EU ruling by Germany’s constitutional court.

Students of European law know to associate Solange not, as in France, with a woman’s name but with a series of EU rulings from Germany’s highest court dating back to the 1970s.

At its simplest, generations of red-robed constitutional judges in Karlsruhe have, in their “Solange” rulings, given their qualified backing for EU law.

EU law is compatible with the Basic Law, the post-war constitution, as long as – “solange” in German – EU law offers what Karlsruhe deemed “substantially similar” protections of fundamental rights as in national law.

Despite a steady stream of German constitutional challenges to EU law over the years, Karlsruhe always deferred in the end to the Luxembourg-based Court of Justice of the EU (CJEU). But its “Solange” and other rulings always reserved the right to conduct a deeper investigation, if needed at some time in the future, of whether EU legislation or institutional activity was compatible with the German constitution.

Karlsruhe decided the time had arrived with the European Central Bank’s bond-buying programme. In its ruling, Karlsruhe said that ECB bond-buying to stabilise the euro did not count as illegal monetary financing, as the complainants in the case claimed. But it agreed with their concern that the programme had not been explained enough to justify the participation of the Bundesbank, acting on a mandate from the Bundestag.

Unless that changed, and further proof of the emergency programme’s proportionality was furnished, the court ordered German MPs to rescind Bundesbank permission to continue to participate by August 5th. Although the ruling related to the bond-buying programme begun in 2015 (PSPP), it cuts across the planed Pandemic Emergency Purchase Programme announced recently to deal with the impact of coronavirus.

Many in Germany have joined a hail of criticism elsewhere in the EU, attacking the ruling as excessively divisive and blunt, with potential political blow-back for the block. A pandemic, they argue, is no time to be pedantic.

But many German conservatives – politicians, lawyers and a legion of former constitutional court judges – have greeted the May 5th ruling as an overdue legal bite after decades of “Solange” barks.

Critics of the Karlsruhe ruling, they argue, are showing disregard or ignorance for decades of German jurisprudence on Europe – beginning with our heroine, Solange.

Karlsruhe may defer to the CJEU but it has never signed up to the idea of Luxembourg as a superior court; it speaks instead of a “relationship of co-operation”

According to Peter Huber, the reporting judge in the bond-buying ruling, the CJEU enjoys only a “thin legitimacy” through the European treaties. These drive their democratic legitimacy through member states, their constitutions, their parliaments and, ultimately, their electorates.

By this logic it is up to European institutions such as the CJEU and ECB to adapt to national constitutions – not the other way around. The EU is not a federal entity, they argue, and the CJEU must not act as its supreme court.

Karlsruhe judges warn in their Solange rulings that, in the EU’s current legal reality, they do not see endless legal room to accommodate the expansive ambition of their Luxembourg colleagues, visible in CJEU rulings since the 1960s.

Karlsruhe may defer to the CJEU but it has never signed up to the idea of Luxembourg as a superior court; it speaks instead of a “relationship of co-operation”.

Karlsruhe accepts the primacy of European law over national law. Not because it is self-evident or because Luxembourg insists it is so. Such primacy only exists, it says, because Karlsruhe agreed to it – conditionally.

In the case of conflict with EU law, Germany’s constitutional judges insist that the Basic Law they guard will always prevail.

This is the legal background to a cross-party gathering of German MPs this week to sketch out a plan to deal with the ruling before the August 5th deadline.

Their task is to establish – on behalf of the voters they represent – the proportionality of the bond-buying programme on which rests the constitutional legitimacy of Berlin’s participation.

Their riddle: how to demand the ECB explain itself and its bond-buying programme, as Karlsruhe demands, given the bank is politically independent and not answerable to national capitals.

A five-page paper, circulated to MPs this week, sees one solution in the European Parliament. At her regular appearance there in June, the authors suggest ECB president Christine Lagarde could – completely coincidentally – remind MEPs in some detail of just how careful and proportionate her institution has been in devising and supervising the PSPP bond-buying programme.

Another solution would be for the ECB to ask the Bundesbank to explain the proportionality of the PSPP bond-buying programme: awkward given the German central bank’s consistent opposition.

A final proposal: fold the emergency programme from 2015 (PSPP) into the newer PEPP bond-buying programme launched in response to the Covid-19 pandemic. This would have, Bundestag paper suggests, the “advantage . . . of reducing the risk for future legal action”.

A senior source in Frankfurt says the ECB has already identified these and other proposals – including not responding – but that the final choice of action rests with the governing council.

Even if Berlin competes its bond-buying homework in time, no immediate solution looms on Solange’s Revenge.

As former constitutional court judge Dieter Grimm argues, a far bigger dilemma than bond-buying is how “both courts” – in Luxembourg and Karlsruhe – “are arguing based on assumptions that, for them, are correct”.

The German ruling is disconcerting to many in Europe, all the more so because it calls out two fundamentally contradictory views of EU jurisprudence which, for half a century, have existed in uneasy co-habitation.