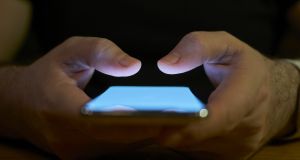 ‘I was prompted to write something about populism after being contacted by someone who was appalled by postings he’d tracked on Facebook, published by people commenting on Irish politics.’ Photograph: iStock.

It is sometimes said that Ireland has been fortunate in avoiding the type of populist politics that is causing so much damage to other democracies.

But if a populist politician is one who claims to speak on behalf of the people, while relentlessly blaming all society’s ills on a “corrupt political elite”, then we have our fair share of them.

I was prompted to write something about populism after being contacted by someone who was appalled by postings he’d tracked on Facebook, published by people commenting on Irish politics. Most of the commentary was angry, some of it was vicious, and almost all of it chimed with the definition for populism cited above.

Among the material he forwarded were screenshots of the work of a man who produces tens of postings on Facebook, hour after hour, day after day. He has five thousand followers, including “community pages” for groups who generate and circulate similar material.

The man has a voluntary officer role in the local organisation of a sitting TD. I asked him, over Facebook, to contact me, but he didn’t. His TD, whom I telephoned, and who follows him on Facebook, said he was “a very nice man” and expressed surprise that he might publish postings that could be considered offensive.

“Of course we can’t be held responsible for what our supporters do on their Facebook page,” the TD said, and promised to look into the matter. The activist continues to be busy on Facebook.

I decided when writing this not to name the party or the activist, in order to avoid a sterile debate where those who support the party in question would simply hurl abuse in response, and the whole point of raising the topic would be lost.

The party the man belongs to has a code of conduct for members which says that no form of abuse or harassment on social media is acceptable. Party guidelines for social media use say that activists who breach the party’s code will be dealt with through party disciplinary structures.

Many of the man’s postings are accompanied by photo-shopped images. One that he seems to like is a cartoon of a hairy male bottom, with the superimposed faces of Leo Varadkar and Micheal Martin, one on each cheek. “Two cheeks of the same arse”, reads the caption. Another favoured image shows the two politicians, one in each of two toilet bowls: “The same sh*te in different toilets.”

In March the activist posted a photo-shopped picture of Leo Varadkar with distorted features, prompting a response from one of the man’s “friends”:

“If I had nothing to live for on this earth and I had made the decision to end my life, I would find a way of getting Leo the liar and as many others in FF and FG TDs and I would do my best to wipe them out and I know it would be great for Ireland and the iron grip these b**tards have on our country would all but end and I would never hit a woman but on that occasion I’m making a few exceptions. Imagine how great it would be to be breaking [a named FG TD’s] nose with a headbutt, keep Leo and Harris until last, and torture them both. I despise these scum and what they are doing to our country and its people. Pure unadulterated scum.”

The man’s response triggered a number of likes and replies, including one from a page with a woman’s name that read: “Beautiful. I feel the same way and I am female. Could not have said it better.”

A type of cancer

It’s shockingly easy, when you look for it, to find comment on Facebook about Irish politics where an offensive and abusive tone is the norm. (Facebook calls it “engagement”.)

It is a tone which, by its nature, is ripe for exploitation by politicians who fit the definition of populist cited earlier. Yet these politicians, who presume to cast themselves as leaders of “the people”, only ever speak out against what these online “activists” are doing when the media, whom they tend to deride, puts them under pressure to do so. It reeks of bad faith.

Society needs to learn how to shun such politicians. They promote distrust, and hatred, hoping they can profit from it. The constant noise they encourage is a type of cancer, or infectious bug, against which we desperately need a vaccine. They threaten us all.