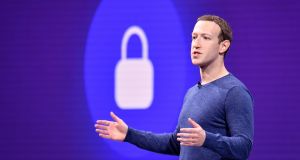 Facebook chief executive Mark Zuckerberg: likes to say such things as “So, it comes down to the economics”. Photograph: Josh Edelson/Getty Images

The habit certain people have of starting every sentence with the word “so” is now at least as old the century, I’m told. We should be well used to it by this point. But I was listening to an interview this week with a politician who is especially afflicted and, as usual, every time he said it, it was like being hit on the head with a soft mallet.

The effect is not sore, exactly. It won’t cause brain damage (I think), at least in short durations. It is, nevertheless, a form of torture.

After a while, the listener badly wants it to stop, if necessary by first stopping the thing that’s causing it (the interrogation). This may explain its popularity with those being interviewed.

In one way, the habit is a mark of human progress in the sphere of mass communication. Before the discovery of “so”, many interviewees used instead say “em” or “eh” at the start of every sentence. I’m not sure they were the same people, but that tic seems to have died out with the other’s rise.

And “so” is a proper word, at least, even if it serves many of the same purposes “em” did – as a voice steadier, or a chance to think, or a way to test the microphone without saying “one, two, one, two”.

“So” is just as meaningless as “em” in most cases, but its genius is that appears to mean a lot. Few two-letter words carry as much unearned significance.

At its most benign, as a simple conjunction, it implies a continuity with the speaker’s previous utterances.

Used repeatedly, it suggests an unbroken chain of logic in thought and speech, even if this is not apparent to others.

And there’s the rub.

Because it also implies that any seeming inconsistencies are in the mind of the interviewer or listener. It complements another verbal prop that must be taught in PR school – “Let me be very clear about this” – except that it subtly changes the tense, implying the clarity has already occurred and we missed it.

When, for the umpteenth time in an interview, the speaker starts an answer with “so”, what he or she seems to be saying is: “I have been clear about this. But your puzzled expression and continued resort to dumb-ass follow-up questions suggests you haven’t understood. So let me try again, slowly, and see if you can keep up this time.”

I’m not sure whether it’s Seamus Heaney or Mark Zuckerberg we have to blame for the phenomenon, by the way, but it’s one of the two.

Back in the year 2000, Heaney published his translation of the Old English epic Beowulf, the first challenge of which is what to make of its opening one-word sentence, “Hwaet”.

Previous translators had opted for “Listen!”, “Attend!”, and even “What ho!”. But setting the tone for a new millennium, Heaney went with “So.”

He credited this to the way his Derry forefathers spoke, the “solemnity of utterance” they achieved in short or few words.

And if it was good enough for Heaney, no wonder so many others seeking solemnity of utterance have been using it as an opening gambit since.

Around the same time Beowulf came out, however, a lesser work of literature, set in California, was noticing a tendency of people there to start all their answers with “so”. That was Michael Lewis’s The New New Thing (1999), a book about the entrepreneurs of Silicon Valley, which credited the habit to computer programmers.

You can easily see how that would have started. People in IT are used to not being understood by ordinary humans, despite what to them is the obvious logic of everything they say. But starting from a sincere belief that their explanations were self-evident, the habit may have evolved into a front for those who knew we could never understand and were only pretending to enlighten us.

An early adopter, it has been noticed, was Mark Zuckerberg, who liked to say such things as “So, it comes down to the economics” a lot.

He may have been the model for its now-ubiquitous use in public life. Much as politicians love quoting Heaney, we can probably rule him out of our inquiries.

Anyway, the habit is at least 20 years old now.

And whatever about brain damage, it must be changing the way young people think. Soon, having noticed the aura of unshakeable confidence it confers on adults, there will be a whole generation of children that, when asked “Who cut down the apple tree?” or “Why is the there a dead cat in the washing machine?” will instinctively begin their explanations with “So . . .”.