Brendan Voyage(s) – Frank McNally on a tangled tale of memoirs 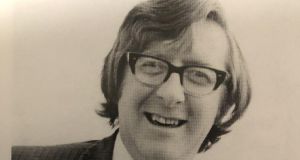 The late Brendan Cardiff, retired veteran of many years at the European Commission in Brussels and occasional correspondent with this column

I was sad to hear over Christmas of the death of Brendan Cardiff, retired veteran of many years at the European Commission in Brussels and occasional correspondent with this column.

He had featured here as recently as last month, when (prompted by John Le Carré’s demise) recalling the weird experience of driving home to Dublin’s northside in 1964, past the Berlin Wall – Hollywood version – and stopping to watch Richard Burton’s doomed escape attempt from communist-held Smithfield.

But news of his passing also reminded me guiltily of a book of “old guff” (his own description) he had sent me nearly a decade ago, Roots & Routes – Memoirs and Musings of a Dublin Nomad, which had been buried in a paper avalanche soon afterwards and was still unread.

So I dug it out, however belatedly, and have since been enjoying more of his recollections, including one from his paternal homeland of Kildare, but also touching on war.

Despite being an ardent Nazi, he had been somehow acquitted at the Dachau military tribunal and later made his own escape from internment

Among his childhood visits to the Curragh was one to friends who lived beside Martinstown House, “then occupied by an elderly, secretive German who, it later emerged, was none other than the notorious Waffen-SS Obersturmfuehrer Otto Skorzeny, Hitler’s favourite commando”.

Skorzeny’s wartime exploits had included rescuing Benito Mussolini from an Italian mountain fortress in 1943, using gliders, in an operation so daring even Churchill had to admire it.

But despite being an ardent Nazi, he had been somehow acquitted at the Dachau military tribunal and later made his own escape from internment to live out his later years in Franco’s Spain. Along the way, he also bought a horse farm in Kildare. And although the government was uneasy about his visits here, the most they could do was deny him permanent residency.

He was not completely secretive, either. Among his public engagements in Ireland was an appearance at the Dalkey Literary Historical and Debating Society in 1960, where he regaled the audience with a detailed account of how he had sprung Mussolini.

Back in Cold War-ravaged north Dublin, meanwhile, Brendan Cardiff’s childhood memories also included hearing the explosion in the Phoenix Park, close to where he lived, that (after several failed attempts) finally removed the likeness of Field Marshal Hugh Gough and his horse from their pedestal.

Pending relocation to England, the sculptures were brought “to a storage yard in the Royal Hospital [Kilmainham]”.

The latter, Brendan recalled, was “filled with Victorian statuary, comparable to the statuary graveyards to be visited in the outposts of the old Soviet Empire”.

And I mention that last detail only because it forms one of the threads in a strange coincidence of memoirs. For no sooner had I picked up Cardiff’s Roots & Routes again last week, 10 years late, than another book arrived in the post, newly published, written by a different Brendan, and entitled Roots & Wings.

The author in this case is Brendan J Nangle, also a Dubliner, also born in the 1940s. His career was in chemistry, here and overseas, but the book is mostly about his childhood. And he sent it to me in part because he had deduced that I live beside the aforementioned RHK, now home to the Irish Museum of Modern Art along with being the permanent resting place of the many old soldiers who died there during its two-and-a-half centuries as a military hospital.

Remarkably, during his early years, it was also home to Brendan J. This is because, by then recently vacated by the British army, the RHK had seen a changing of the guard – literally – to become an early headquarters of the Garda Síochána. Brendan’s father was Garda duty officer on site, with a house and a private garden.

Thus the book includes a fascinating description of a period when there was still a working blacksmith’s forge in the grounds, when the other resident guards had vegetable plots in the meadow, and when the Special Branch had a firing range in the courtyard that now houses artists’ studios and the sculpture of a giant hare playing a bodhrán.

The Nangle occupancy ended abruptly in 1950, when dry rot was discovered in the hospital’s roof beams, forcing gardaí to relocate to Phoenix Park. That was a few years before Field Marshal Gough made the trip in the opposite direction.

Speaking of Victorian statuary, Nangle recalls a large bronze Queen Victoria “peering coldly out through one of the ornate windows”.

This, presumably, was after her expulsion from Leinster House Lawn. She was now sharing the fate of many an Irish patriot – a period of incarceration in Kilmainham – and was later transported to Sydney, Australia.