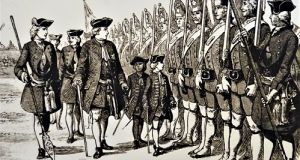 In his role as unreliable narrator of WM Thackeray’s classic novel, Barry Lyndon frequently stretches the reader’s credulity. His tales are nowhere taller, we might suspect, than the one about an outsized Tipperary soldier who defrauds the Prussian army into giving him the money to go home and buy a farm.

But strange to say, that story appears to have more than a grain of truth.

In Lyndon’s account, the soldier was nicknamed “Morgan Prussia”. His unspecified but prodigious height had caused him to be press-ganged into a regiment of giants – there really was such a thing – created in the early 1700s by the then king of Prussia, Frederick William I.

The king, himself only 5ft 3, had a fetish for tall recruits, collecting them from all over Europe at great expense. He took enormous pride in his “Long Fellows”, parading them at Potsdam like human toys, albeit toys that were subjected to harsh military discipline and dared not desert.

By the time Barry Lyndon – himself a deserter from the British army – arrives in Germany, however, Frederick I has been succeeded by Frederick II (“the Great”), who is not so indulgent of his late father’s hobby and has trimmed the Potsdam Giants to a mere battalion.

But the Seven Years War is now raging, and there is a still a lively trade in fighting men, with a premium on height. As Lyndon rides to Dusseldorf, wearing the stolen uniform of a British lieutenant, he falls into the company of a Prussian recruiting officer who tells him, laughing: “For fine men – for men like you – we would go as high as a hundred.” Back during “the old king’s time”, the officer adds, “we would have given a thousand”.

This is Lyndon’s cue to recall the story of the Clonmel man of a previous generation who, finding himself in the giants regiment, was cunning enough not to echo the complaints of his comrades about army life. “Better to get fat here in Berlin,” he had argued, “than to starve in rags in Tipperary”.

Instead, he let it be known that his only regret was not not being able to bring his six brothers over, to share the good life.

Pressed further, he claimed to be the shortest in the family and said the tallest, his “brother Bin” (as Lyndon has him pronounce Ben), was “seven feet in his stockin[s]”.

But when the Prussians suggest sending an envoy to Ireland to sign these wonders up, he cautions against. They would be wary of recruiting sergeants, he warns. Only his own persuasion might tempt them. Tempted in turn, the king dispatches him back to Ireland with the signing-on fees, which he promptly invests in a farm, never to revisit Berlin.

In the footnotes to my copy of Barry Lyndon, Andrew Sanders suggests a real-life model for Morgan Prussia. The story “is possibly based on that of the Irishman James Kirkland for whom Frederick William paid £1,000”.

And Kirkland is well documented.

Born near Ardagh, Co Longford, he was working in London, as a footman to the Prussian ambassador, when forcibly exported to Berlin circa 1730. A portrait of him in uniform still hangs in a museum there and notes that he was “6 fus 8 zoll” (6 ft 8 ins).

But in Borris, Co Carlow, there is also a tradition, in folk memory at least, of a Morgan Prussia Kavanagh, “the tallest man in Europe”, who was similarly recruited during that era.

That includes the escape subplot, which is mentioned in the Dúchas school folklore collection of the 1930s. There, a Borris student records the story of the brothers (there were only three in this version) and adds that “every year on the anniversary of his escape (Morgan) went to the top of Brandon Hill and made a royal salute in the direction of Prussia”.

Despite all the money spent on them, or because of it, the Potsdam Giants never seem to have done much fighting. They were officially grenadiers but, being in many cases the victims of a medical condition – gigantism – may not have been much suited to military life.

In any case, anticipating the hippy mantra of making love, not war, Frederick I’s enthusiasm for the project included encouraging them to find similarly vertiginous females and start families. The results earn passing mention a century later in Charles Darwin’s The Descent of Man, when he notes that selective breeding of humans has been rare in history, “except in the well-known case of the Prussian grenadiers; [about which] it is asserted that many tall men were reared in the villages inhabited by the grenadiers and their tall wives”.