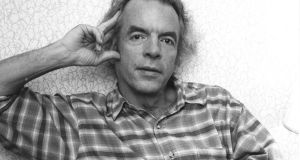 In its original stage format, as you’ll know, Wild Mountain Thyme was a play called Outside Mullingar, which premiered on Broadway in 2014. More specifically, its Bronx-born author John Patrick Stanley set it in Killucan, a village off the main road between Mullingar and Kinnegad. But strange to say, that was not the only New York theatrical production of recent years to be inspired – for good or bad – by rural Westmeath.

Before he took his own life 17 years ago this weekend, the actor and writer Spalding Gray had been performing a comic monologue that centred on a life-changing car crash he suffered three years earlier, while on holiday in Ireland, on a back-road near Moate. As a work in progress, it was entitled Black Spot, the locals’ verdict on his accident location. In performance, it became Life Interrupted, as which, although unfinished at the time of his death, it was also published.

Mind you, the geographical niceties of the incident seem to have been lost on Gray, who claimed it to have happened near a town called “Mort”, a detail he considered ominous. We might suspect poetic licence there, given that death was a constant theme in his work and that, in the words of the monologue, there had been “a lot of [it] in the air that day”, including his first encounter with a great Irish cultural phenomenon, the death announcements on local radio. “I had never heard anything like that,” he said.

So Moate could have mutated into “Mort” for artistic purposes, except that he also placed it in “the county of Offaly” and even spelt that funny name out – “O-f-f-a-l-y” – for the benefit of his New York audience. In fact his accident was at a place called Rosemount, well inside the Westmeath boundaries. Perhaps, like Hollywood accent coaches, he was just not overly concerned with fine detail.

His trip to Ireland had been a 60th birthday present from his wife – a lavish present, because they were accompanied by an extended family of “about 12”. But Gray had been here six times before “and wanted to go back”. This country “made me laugh in a way that the United States doesn’t”, he said.

In a mixed compliment to the natives, he went on: “I like them; they’re optimistic and philosophical. They’re not industrialised, really – there was no industrial revolution – so they drive pretty haphazardly. They don’t have a great relationship to machinery, to say the least. There’s a lot of banging around and the roads are very narrow, and they just get in their cars and go, you know, they just put their pedal to the metal and they’re going everywhere, in all directions.”

Despite noticing which, he was by his own admission not wearing a seatbelt on the night in June 2001 when the car driven by his wife collided head-on with a van. His hip was smashed and his skull severely dinged, leaving an ugly scar.

But like most writers and comedians, his first instinct on recovery was to use the disaster as material.

His eventual stage show included mimicking a bossy local nurse who tried to lecture him out of the despondency he felt in hospital. The characterisation was spot-on and got big laughs in New York, although his Irish accent would not have been out of place in Wild Mountain Thyme.

A few weeks after the crash, alas, Gray stopped seeing the funny side of life. It’s unclear how much his subsequent depression was a direct result of events in Ireland and how much was predisposition. He had been suicidal before and his mother too had taken her own life. The neurologist Oliver Sachs, who treated him, suspected actual brain damage, aside from the depression. But in a 2015 New Yorker article, Sachs also wrote of how his patient became obsessed with committing “creative suicide”, as the ultimate act in his performing career.

“I was at pains to say that he could be much more creative alive than dead,” Sachs recalled. Unfortunately, the neurologist lost the argument when Gray disappeared off the Staten Island ferry on January 11th, 2004. His sad story puts Westmeath’s other misadventure on Broadway into perspective.

The coincidence between the two stage shows extends beyond geography. Outside Mullingar also began with a 60th birthday trip to Ireland, when the playwright had an urge to write about his father’s family’s farm. Nothing worse resulted from that than dubious drama. The play was in any case somewhat better received by critics than the film it inspired, even if this newspaper’s Fintan O’Toole found it to have transcended all known county boundaries, being located “beyond the edge of awfulness”.