The Irish Times view on the Hong Kong crackdown: Beijing tightens its grip

Since a new security law was introduced, authorities have used it to arrest 93 opposition figures, frozen activists’ assets and confiscated phones and computers 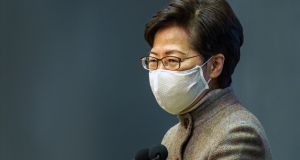 The arrests last week of 55 democracy activists in Hong Kong for “subversion” is only the prelude to a further ratcheting up of pressure by Beijing on the protest movement, reports predict. The news agency Reuters quotes anonymous senior figures close to Beijing as warning that new measures are being prepared to limit the role of dissidents contesting Hong Kong elections – already postponed until September on coronavirus grounds – and that the polls may be postponed again.

Beijing is worried the opposition could still muster a majority in the legislature and one anticipated measure is the likely disqualification of hundreds of democratic “district councillors” as candidates. It is determined to avert any return to the mass protests of 18 months ago that saw the strongest public revolt against China’s leaders since the Tiananmen Square protests in 1989.

Mass resignations last November from Hong Kong’s legislative assembly by democracy campaigners over the introduction of a controversial new security law mean that any changes to electoral laws to further isolate the opposition would now be procedurally guaranteed with the legislature now controlled by pro-Beijing politicians.

Since the new security law was introduced, authorities have used it to arrest 93 opposition figures, frozen activists’ assets, confiscated phones, computers and travel documents, disqualified some lawmakers and targeted media with a crackdown online. Hundreds have fled into exile.

The dozens arrested last Wednesday spanned the pro-democracy spectrum, including trade unionists, minority and disability rights activists, and former lawmakers. They were linked to an unofficial primary organised by pro-democracy parties ahead of the elections.

Yesterday the arrests were strongly condemned jointly by Australia, the US, the UK, and Canada as a “clear breach” of China’s international obligations, specifically the Sino-British Joint Declaration and the ‘One Country, Two Systems’ framework which China pledged to maintain when the UK handed over the colony in 1997.