Separating sheep from goats: An Irishman’s Diary about guilt and innocence 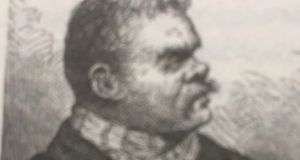 James “Skin-the-Goat” Fitzharris was the cab-driver who brought the “Invincibles” to Dublin’s Phoenix Park one May evening in 1882.

Writing recently about the wartime experiences of Irishmen used as slave-labour by the Nazis, I mentioned a doctor in their camp, Walter Heidbreder, and called him “a decent man, exonerated at the postwar trials”.

That paraphrased the opinion of Harry Callan, the last Irish survivor of the ordeal, whose new book Forgotten Hero of Bunker Valentin was the basis for my column.

And certainly, Dr Heidbreder and his family appear to have behaved decently to him. Without their kindnesses, Callan might not have made it out of Germany alive, never mind survive to publish a memoir at 93.

To them, he was more than the reluctant participant in a brutal regime, doing what he could in difficult circumstances, as protested at his trial

But as I have been reminded since, there were starkly contrasting views of Heidbreder’s role in that camp too, including those of other Irish prisoners.

To them, he was more than the reluctant participant in a brutal regime, doing what he could in difficult circumstances, as protested at his trial.  Several went so far as to testify against him, alleging wilful mistreatment.

Indeed, Callan’s book acknowledges this in a post-script, albeit when expressing anger that he himself had not been called as a witness.  He only found out in recent years about what had been said at the trial.  Given a chance then, he wrote: “I would have spoken up for the doctor.  He had done everything he could for us.”

The difference of opinion about Heidbreder hinges in part on a phrase that must have been common in Ireland once but has since died out.  Thus two of the former Irish prisoners at the trial gave evidence that his camp nickname had been “Goat-skinner”.

It was not a literal description of anything.  But as William Knott, a Dubliner explained, goat-skinner was an Irish term “for the cheapest type of veterinary surgeon”. .

On this too, Harry Callan had a contrary view.  He defines the expression as one “used by poor Irish farmers for the veterinarian who came to look after their livestock but who himself was too poor to have modern medicine and equipment”.

This was the crux of Dr Heidbreder’s situation, he believed, not just in the camp but among his patients in the local village, for whom he had no medicine either.

If not a back-handed compliment, Callan suggests, “goat-skinner” was an acknowledgment of impossible working conditions: “To some who had never heard it before, it must have sounded derogatory - it made him sound like a butcher.  Someone should have explained . . .”

But even without such explanation, Heidbreder was cleared.  The case against him had been hampered by absence of records, all documentation having been destroyed before the camp’s liberation. The judge also commentated that medical incompetence – one possible interpretation of “goat-skinner” – was not usually considered a war crime.  So despite the evidence against him, the doctor was presumed innocent.  But his ultimate good fortune may have been that one of the prisoners he was conspicuously kind to should also be the last man left to tell the tale.

If the concept of goat-skinner has disappeared from everyday speech, it survives in one of the more famous nicknames of Irish history.

But after the assassinations of Cavendish and Bourke, he was in the frame anyway and served a lengthy prison sentence

James “Skin-the-Goat” Fitzharris was the cab-driver who brought the “Invincibles” to Dublin’s Phoenix Park one May evening in 1882.  How much, if any anything, he knew of their intent remains obscure. But after the assassinations of Cavendish and Bourke, he was in the frame anyway and served a lengthy prison sentence: emerging eventually to be further immortalised by a cameo in Joyce’s Ulysses.

Fitzharris was never a vet, under-resourced or otherwise.  He had, however, reputedly once skinned a goat, and that was enough for the epithet.

According to The Real People of Joyce’s Ulysses, by Vivien Igoe, the unfortunate animal had been found plucking straw from a horse’s collar one day.  Applying the death penalty, Fitzharris then adapting the animal’s hide as a rug to cover his knees while driving.

In his own way, Skin-the-Goat was a study in notions of guilt and innocence.   He was born poor and died that way, in the South Dublin Union.  But having refused £10,000 and a new life abroad to turn queen’s evidence, he had – by his own lights – acquitted himself with honour.

He had a colourful phrase for this, also involving an animal.  In later years, his boast was that he had been born in “Sliabh Buidhe” – a place in Wexford – “where a crow never flew over the head of an informer.”

1 Cork student fatally stabbed in the neck at house party named
2 Murdered and mutilated: Keane Mulready-Woods and the teenagers of gangland
3 Sinn Féin suspends councillor over ‘beyond offensive’ comments
4 Patrick Freyne: The mystery of Dermot Bannon and his many surrogate wives
5 Who was murdered teenager Keane Mulready-Woods?
Real news has value SUBSCRIBE