‘In November 1887, he retreated from his normal living quarters into the adjoining keep’ 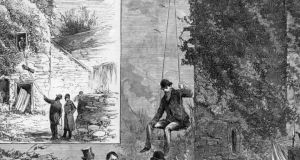 All but forgotten today, Pyne is remembered at least in Dungarvan Museum, where exhibits include a dramatic front-page portrait from the Illustrated London News of November 1887

The late 1880s were a fraught period in Ireland, culminating with the Parnell divorce case and all that followed from it.  But they also brought some light relief, thanks to another nationalist MP, one Jasper Douglas Pyne, whose antics earned him a brief celebrity on both sides of the Irish Sea.

Born in 1847, the son of an English clergyman, Pyne had inherited Lisfinny Castle in Waterford and with it a zeal for the two great causes of his era: land reform and home rule.

As the local MP from 1885, he was notably militant.  A police report called him a “violent speaker”, suggesting he had been chosen by Parnell only because a more suitable candidate couldn’t be found.  It also alleged that Pyne had gone “to the bad through drink”.

In any case, during an anti-eviction protest in 1887, he made one of the speeches that the authorities so disliked, calling the police “armed assassins and murderers in uniform” and promising bailiffs a hostile reception when they arrived.

So he was charged, under emergency legislation.  And had the long arm of the law been able to reach him then, he would have faced a spell of imprisonment.

Instead, in November 1887, he retreated from his normal living quarters into the adjoining keep – a dilapidated yet forbidding structure – where, like a monk in a round tower, he barricaded himself in, vowing not to emerge until the next session of parliament.

The ensuing stand-off drew mixed responses.  The police and judiciary were unimpressed, of course. Michael Davitt didn’t entirely approve either, thinking the spectacle undignified.  But the protest caught the popular imagination, locally and farther afield.

Pyne had brought sufficient food for the siege.  Friendly visitors were winched in via block-and-tackle to keep him company.  He also amused himself occasionally by throwing stones at the police.

But notwithstanding helpful suggestions from the English press, the besieging forces did not attempt to assault the stronghold or flush him out.

A furious inspector denied Pyne had returned to the castle, 'for the simple reason that he has never left it'. But police couldn’t prove this

In locking himself in, they were able to claim, Pyne was incarcerated as effectively as they could wish, albeit in a prison of his own choosing. Against which argument, the inmate could also claim to escape occasionally and not be contradicted.

Sure enough, in early December, he gave police notice that he would be leaving the castle for three days from the 13th.  Extra guards were posted. But on the 17th, the Freeman’s Journal reported that, having been smuggled out for his furlough, the prisoner had now gone back in.

A furious inspector denied Pyne had returned to the castle, “for the simple reason that he has never left it”. But police couldn’t prove this.

Then, in January 1888, he really did leave, eluding them again.  Sympathisers had driven hundreds of cattle around the castle.  In the confusion, Pyne was spirited away, his escape furthered by the cutting of telegraph wires.

Boarding a boat in Cork, he was soon in the House of Commons, as promised. There, finally, he was arrested, despite pleading parliamentary immunity.  In the end, he did serve a short sentence, in a more conventional cell.

All but forgotten today, Pyne is remembered at least in Dungarvan Museum, where exhibits include a dramatic front-page portrait from the Illustrated London News of November 1887, depicting him at the height of his fame (or just below it, descending from the castle via a pulley).

I’m also indebted to Laurence M Geary, who wrote a centenary essay about him for the 1990 issue of the Old Waterford Society’s journal, still available online.

It was by then 101 years since the colourful MP disappeared from Irish life, aged 41. The last reported sighting of him was on board a ship en route to Ireland in November 1888.  He was (and is) presumed to fallen overboard.  But such was his nature, there remained some doubt on the matter long afterwards.

Pyne’s penchant for practical jokes was noted.  An acquaintance also recalled him once claiming he could easily fool people into thinking him dead.  And far from behaving like a widow, his wife was said to be confident he was alive – in Colorado, specifically.

Even after the Irish Party replaced him in a byelection, in 1890, the case was not quite closed.  But a few months later, The Irish Times reported a short court hearing in which Mrs Pyne applied for permission to administer his estate.  With that, any expectation of a comeback seems to have disappeared.