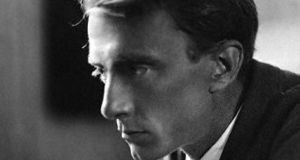 When Robert Frost wrote his famous poem The Road Not Taken in 1915, he thought of it as a playful thing, rather than any kind of manifesto. After all, as it says, the diverging paths in the wood looked more or less the same.

So in his conclusion that the one he had taken “made all the difference”, it is implicit that, not having chosen the other, he would never know what that difference was.

But from very soon after publication, the poem was being interpreted more seriously by many readers, as an encouragement to be masters of their destiny. And among those it may have influenced in this way, to fatal effect, was Frost’s best friend, fellow poet Edward Thomas.

Their story was told in a fine book of a few years ago, All Roads Lead to France, by Matthew Hollis, which describes the events that led, first, to Thomas first discovering his voice as a writer, and then to volunteering for the Great War, in which he would die 100 years ago today. Frost was central to both events.

Thomas, by contrast, was a well-known critic, highly respected by others if not by himself. Doubting his own worth, he suffered episodes of depression that forced long absences from wife and family.

Then he met Frost and their lives were mutually transformed. Thomas championed Frost’s work, setting him on a path to enormous success. In return, Frost convinced his friend that he was far more than the hack writer he feared himself. Soon, Thomas too was composing poetry of a high order.

In the meantime, they had also become walking companions – the nature-loving Thomas often leading Frost on bird-watching treks through Gloucestershire along paths of the kind mentioned in The Road Not Taken. Thomas sometimes regretted afterwards that they had gone the wrong way. And this tendency to rueful indecision, for which his friend teased him, was probably the model for the poem.

But according to Hollis, there was another incident during those walks that Frost would later credit with Thomas’s decision to fight. One day, in later 1914, they had a confrontation with an angry gamekeeper who warded them off a property with a shotgun.

Annoyed at their retreat, Frost insisted on returning to face the bully down, which he did. But when Thomas then found the gun pointed at him, he backed off again and was later ashamed that he had failed to match his friend’s courage.

This, Frost believed, was the moment that set him on a path to war.

Being in his late 30s and married with children, Thomas didn’t have to fight. Nor, apparently, was he compelled by any conventional patriotism. He was indifferent to the politics of the war and contemptuous of jingoism.

His destiny may have been sealed by then anyway. But at a crucial moment in the summer of 1915, the still-hesitant Thomas read Frost’s latest batch of work including The Road Not Taken. And that, in the poem’s words, may have made all the difference.

He and Frost were so close that, when the latter had returned to the US earlier that year, they talked of Thomas emigrating there too, so that they could live as neighbours.

Instead, in July 1915, the Englishman enlisted in the Artists Rifles. He was eventually sent to France in time to take part in the Battle of Arras and died on its first day, April 9th, 1917, shot through the chest.

Among the thousands who died in it, there was at least one other very notable example of diverging destinies. Two weeks into the battle, on April 24th, 1917, one Sgt Maj Bill Kent met his death in a hail of machine-gun fire. It was a year to the day since the Easter Proclamation had been read out in Dublin, bearing seven signatures including that of his brother, Éamonn Ceannt.