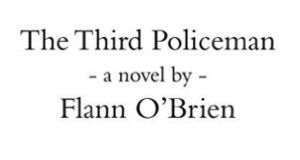 It’s that time of year when many people are again wrestling with one of the great philosophical questions: “Is it about a bicycle?” Yes, tomorrow’s 51st anniversary of the death of Brian O’Nolan, aka Flann O’Brien, will bring the annual upsurge of interest in his work. And the aforementioned question will have special resonance this time, it being 50 years since it was first posed in his posthumously published comic masterpiece, The Third Policeman.

The Flannfest begins tonight with a radio “docu-drama” on Lyric FM, entitled Bones of Contention. Promoting which, the website says this: “If James Joyce is Ireland’s most discussed and least read author, then Brian O’Nolan must be Ireland’s most read and least discussed.” I’ll let Joyceans speak for themselves about the first part of that assertion, but as a confessed Flannorak, I’m not sure the second part is true anymore.

Our man might have suffered a discussion deficit once. But thanks to the International Flann O’Brien Society, for example, he has been the subject of three major conferences – in Vienna, Rome, and Prague – since 2011, with another (in Salzburg) happening this year. These events are now biennial; on a principle similar to crop rotation, the academics always leave the field 24 months to recover.

But in between, members of the global cult now satiate themselves with issues of an in-house journal, The Parish Review, or write their works of Flann/Myles scholarship for the much-prized, and also biennial, Father J Fahrt memorial awards.

Then there is the sub-genre of pseudonymous letters to newspapers, of which O’Nolan was also a master. Here too, he attracts levels of homage even Joyce might envy. I’ve mentioned before the work of Angela Polsen-Emy, a prolific writer to Irish and British publications, whose name (perhaps coincidentally) is an anagram of Myles na Gopaleen.

Likewise Manny Aspe-College, whose anagram – even more impressively – includes the eclipsis Myles himself dropped circa 1943. But more recently, my attention has also been drawn to the output of an Alfe Ninbörn, from Stockholm.

His erudite letters have included one to the Financial Times on the magnificently circular subject of how to get letters printed in the Financial Times. And as my eagle-eyed correspondent Walter Götz, who had already alerted me to Manny and Angela, points out, Alfe Ninbörn is an anagram of “Flann O’Brien”.

Anyway, to get back to this evening’s docu-drama, it carries the subtitle “The Search for Brian O’Nolan”.

Those helping police with their inquiries include Tommy Tiernan, Patrick McCabe, and Ardal O’Hanlon.

Tributes will continue tomorrow with a “Flann O’Brien Night” in Dún Laoghaire, the highlight of which is Eamon Morrissey reprising his role as The Brother’s brother. And as if to confirm that O’Nolan is muscling in on Joyce’s territory, that show will also include music from “Ceol Anna Livia”.

It starts at 8.30pm in the Dún Laoghaire Club.

But it’s hard to know where Flann O’Brien tributes end and reality begins these days. Take those recent reports about imaginary Irish policemen conducting a million fictional breathalyser tests. I’m fairly sure that was actual news, and not a 50th anniversary tribute to the absurdist novel. And yet the latter explanation might be more convincing.

Equally, I don’t think an event scheduled for the Dublin Quays this Sunday has anything to do with Flann. But it should have, because it’s undoubtedly about a bicycle – or, to more exact, a lot of bicycles. It is, in short, a protest cycle, starting in the Phoenix Park at 11am and proceeding along the north quays towards Point Village.

In the process, participants hope to demonstrate the lack of road space for the bikes that they say now outnumber cars in weekday rush hours along the route, and to press the case for a Liffey Cycleway.

I may have to mount my own two-wheeler and join then, because just as I share the interests of the Flanneurs, I also share one of the broad objectives of the Dublin Cycling Campaign – a wish to stay alive as long as possible amidst the city’s demented traffic. I’m confident Flann O’Brien would approve. Not only did he like bicycles, he also enjoyed a pun. To this end I’m assured that once onto the quays on Sunday, after a brief preamble, protesters will be getting straight to the Point.