A Border poll is now more likely, and the nature of any unity debate has changed 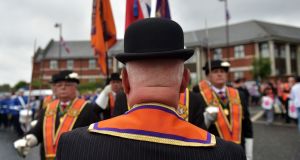 Many unionists will vote for the union come hell or high water, but increasing numbers will now take a more measured, nuanced position. They will want solid answers to some very difficult questions. Photograph: Charles McQuillan/Getty Images

Sinn Féin MEP Matt Carthy is correct (Irish Times, April 4th), I am an “unashamed, unambiguous, unembarrassed unionist”. But I’m also a unionist who has acknowledged that unionist parties have, since 1921, made a very poor job of promoting the union.

We imagined potential enemies around every corner, and, rather than reaching out, winning over, expanding our base and championing equality of citizenship, trapped ourselves in the wagon-circling mantra “united we stand, divided we fall”. To some extent – although I wouldn’t want to over-egg the case – we became the worst possible advertisement for the union.

That union between Northern Ireland and Great Britain – four years away from its centenary – now faces its greatest challenge.

They like being Northern Irish, British, partly Irish and European. That multiplicity of identities suits them

Had there been a Border poll a few years ago the debate would have centred around this question: do you support a united Ireland (untested, uncosted, risky, potentially destabilising and with lukewarm support from the Republic’s political/business establishment) or are you content to support the status quo of the union (where unionists no longer rule the roost in Northern Ireland)?

A few years ago there would have been a very comfortable margin of victory for the status quo. And a sizeable chunk of that margin would have included soft, small-u unionists (comfortable enough with the union but with a more cosmopolitan outlook on social/moral/secular issues than party political unionism); and soft, small-n nationalists (not opposed to Irish unity at some point yet reasonably content with the status quo and unwilling to risk a peace process that has served them well so far).

A post-Brexit Border poll would centre around a very different question: do you support a united Ireland (inside the European Union, protective of a multiplicity of identities and supported by the Republic’s political/business establishment) or do you support the union (outside the EU, possibly diminished by the departure of Scotland, and with the rise of a new form of English nationalism which will have no interest in the Celtic fringes)? That’s a much more problematic challenge for those soft unionists and nationalists.

A significant minority of unionists voted to Remain. They like the European Union, and regard it as a stabilising influence in Northern Ireland. They like being Northern Irish, British, partly Irish and European. That multiplicity of identities suits them.

But a Northern Ireland outside the European Union will change the nature of their relationship with both the UK generally and the Republic. It will make them reassess their priorities. They may conclude that a bigger, broader union embracing Ireland and the European Union is preferable to the smaller, narrower union of a UK out on its own.

Which means they will be prepared to listen to a coherent, persuasive argument from those who make the case for Irish unity within the European Union, particularly if that case is also made by Fianna Fáil and Fine Gael. As I noted at the Sinn Féin unity conference in Dublin a few weeks ago, “given the circumstances, Sinn Féin may not be the best party to make the unity case to either big or small u unionists”.

All of this raises a challenge for unionism. Before Brexit it was planning the centenary of Northern Ireland; choosing the bunting, buffing the Orange Order arches and ordering the paint. Today it is pondering its very existence. Its majority in the Assembly has gone for first time since 1921. A Border poll – while not yet inevitable – is increasingly likely. The dynamics have shifted, and the nature of the unity debate has changed.

I’m not sure that unionism has grasped that reality. I voted Leave, but I acknowledged during the campaign that a victory for Brexit would change everything. It has.

So unionism has to rise to the challenge. What will it mean to be a unionist in Northern Ireland in 2021, when the United Kingdom is out of the European Union and a whopping majority of the English will probably not give a toss about Celtic unionism?

Yes, many, many unionists will vote for the union come hell or high water, but increasing numbers will take a more measured, nuanced position

What message will Arlene Foster – assuming she remains leader of the DUP – have for soft unionists and Catholic unionists? Which big beasts, if any, of pan-United Kingdom unionism will be flying to Northern Ireland to make the case with her?

Unionism doesn’t have a single identity. Beyond a belief in the union it does not even have a single message. So this is now becoming an existentialist debate for unionism.

Yes, many, many unionists will vote for the union come hell or high water, but increasing numbers will take a more measured, nuanced position. They will want solid answers to some very difficult questions, and the leaders of unionism will need to have those answers. Worryingly, they don’t seem to have them at the moment.

Unionism has often encouraged the impression that Northern Ireland is a “place apart” – from both the rest of the United Kingdom and the Republic. The next five years will represent the biggest challenge to the union in my lifetime (I’m 61). There are circumstances and opportunities that have never before existed for the proponents of Irish unity.

There is a case to be made for the union: a strong, compelling case. But unionists, collectively, need to be making it. They cannot – which they often do – rely on the it-will-be-all-right-on-the-night approach; throwing in a bit of fear for good measure.

I believe that Northern Ireland will remain in the UK for the foreseeable future, yet I take nothing for granted. Unionism needs to up its game.

Alex Kane is a commentator and columnist based in Belfast.

1 Coronavirus: People in close contact with Belfast patient identified
2 Murder in a crowded house: The full story of the Patricia O’Connor trial
3 Baby names 2019: Emily and Jack retain top spots
4 Britain is uncomfortable because Ireland has the upper hand for the first time
5 ‘I had to tell my mum not to say that as it means something else’
Real news has value SUBSCRIBE