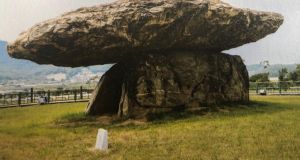 South Korea has an estimated 30,000 dolmens, and North Korea half that again, accounting for a combined 40 per cent of the world’s total. Photograph: Korean Culture and Information Service

Maybe everyone knew this already, and if so I apologise for my ignorance, but at a reception to mark its national day this week, I was astounded to learn that South Korea has dolmens.

Yes, the same kind of ancient stone structures, with supporting legs and a capstone, as the famously photogenic one at Poulnabrone, Co Clare, or the giant at Brownshill, Co Carlow, or indeed the one at Kilternan in the Dublin mountains – barely a mile from the Korean ambassador’s residence – in whose shelter an evicted family is said to have lived for a time during the Famine years.

In fact, it’s a gross understatement to say that Korea (north and south) has dolmens. Other Asian countries have them too. But South Korea has an estimated 30,000, and North Korea half that again, accounting for a combined 40 per cent of the world’s total. To put that in perspective, Ireland has about 190.

The word dolmen is usually said to have originated in Brittany, which has plenty too, and to mean “stone table”, reflecting the once-prevalent view among archaeologists that the structures were erected for ceremonial purposes by Celtic druids.

It’s now known that most dolmens in western Europe are much older than first thought: Ireland’s date from about 3,500-2,500 BC. And famines aside, they were built for the dead rather than the living, as portal tombs.

But the Korean ones are younger than ours, from about 1,000 BC, suggesting they may have been a product of mass migration from west to east. Interestingly too, they tend to have two or four legs there, rather than three. Their many mysteries continue to be investigated.

Another thing Ireland and Korea have in common, more notoriously, is a border, and a north-south border at that.  Indeed, courtesy of Boris Johnson this week, we were briefly threatened with having our version turned into a buffer zone, something the Koreans know all too much about.

Although their frontier is only half the length (250km) of Ireland’s, it makes up for this in width, thanks to the Demilitarised Zone (DMZ), a four-kilometre-deep no man’s land that surrounds the actual line.

To call the zone “demilitarised” is something between a euphemism and a black joke. This is actually one of the most militarised places on earth, heavily policed from both sides, and long rendered impassable by barbed wire, tank traps, and landmines.

But here was the other astonishing thing I learned at the party – and again I apologise if you already knew this.  By the very fact of being a no man’s land, the DMZ has become an accidental nature reserve, of international importance. South Korea, at least, hopes it may eventually become an official eco-park. The North remains sceptical.

I’m reminded of the “Quinet Sentence”, familiar to scholars of James Joyce. It’s a line written by the 19th-century French historian Edgar Quinet and became a favourite of Joyce, partly because it featured the Mediterranean Europe he loved and partly because it summed up his stoic philosophy.

He admired it so much that it became a running motif in his own book about life, death, and rebirth, Finnegans Wake, but in its original form (translated) it goes as follows: “Today, as in the days of Pliny and Columella, the hyacinth disports in Gaul, the periwinkle in Illyria, the daisy on the ruins of Numantia; and while around them the cities have changed masters and names, while some have ceased to exist, while the civilisations have collided with one another and shattered, their peaceful generations have passed through the ages, and have come up to us, one following the other, fresh and cheerful as on the days of the battles.”

Well, it’s not just wild flowers that disport in the Korean DMZ. Two of the world’s rarest birds, the red-crowned and white-naped cranes, took up residence there within years of the Korean War ending and have flourished ever since, tip-toeing around the landmines. They are among more than 300 avian species, 70 other types of animals, and nearly 3,000 plants believed be in there: thriving ironically on the tension between humans on either side. The corollary is that if the two Koreas were to bury their differences and the DMZ to disappear, peace might be a threat to the wildlife.

Even now, the border zone is being eyed up by both sides as one of the few areas of the peninsula yet to have its economic potential tapped.

Conservationists worry that, if political tensions were to subside and cross-border roads proliferate, the area would become attractive to another kind of wildlife, also associated with cranes: property developers.