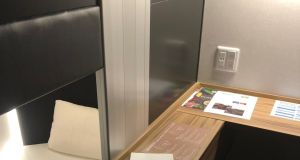 For the first time I noticed my hotel reservation contained the chilling words: “lower bunk”

On the train to Hamamatsu for the Ireland-Japan game last weekend, I took a closer look my hotel booking, made in a hurry late one night a few weeks earlier.

It was for a single room, I knew, and it was to be expected that the room would be small, like the similarly priced ones in Tokyo, where you could just about have swung a cat, but only if you stood inside the bathroom door and leaned out.

But now for the first time I noticed my Hamamatsu reservation also contained the chilling words: “lower bunk”. Was it possible that, despite booking a single room, I would have to share with a stranger? Or did “bunk” have a different meaning in Japan?

The mystery was solved at check-in, where it emerged that I did indeed have a single room, to myself, and that this did indeed have a bunk bed, the lower half of which was mine, while the upper half was next door.

The “rooms”, in short, were L-shaped, except that the L was vertical rather than the usual horizontal.

By now, I realised this was one of Japan’s infamous “capsule hotels”, although that term had not featured in the ads.

And in fact, by the standards of the genre, it was relatively up-market.

This wasn’t just a space you could crawl into to sleep, as in the classic “corpse-drawer” design. It had two compartments, one with a desk, seat, and standing room; the other a curtained off sleeping area, half the height. And when you got used to it, it was almost comfortable.

So was the rest of the hotel. Lack of personal space apart, it had everything a short-term visitor could need. In some ways, it was luxury.

There was a pleasant communal living area, with free coffee, tea, and fruit juices 24 hours a day, plus a vending machine offering several varieties of beer. Even the men’s washrooms had all the toiletries you could want. There was a buffet Japanese breakfast in the mornings, with up to 20 items.

Along with towels, you were issued a two-piece pyjama-cum-karate suit for nocturnal visits to the toilet, or for just lounging around in, if you liked.

Shoes had been removed on entry, so you walked barefoot, or in socks or slippers (including the ones provided at the door of the bathrooms).

Like most capsule hotels, this had segregated male and female areas, so there was a touch of monastic life to it. In the oriental pyjamas especially, you felt like a monk, except that, judging by the noises from neighbouring rooms, a few nuns had been smuggled in as well.

Also, monks are better known for brewing beer than drinking it in the quantities most of the Hamamatsu inmates were.

But as it happens, drinking has always been central to the concept of the capsule hotel. Since the first ones opened in Osaka in 1979, a key part of the clientele has been the “salary man”: the middle-class office worker whose job involved long hours at the desk, often followed by an evening of socialising with the boss or clients.

If he missed the last train, or was in no state to go home anyway, the capsule hotel was somewhere to crash, without the trimmings of a hotel. Hence the place in Hamamatsu coped surprisingly well with the demands of a group of mostly young and inebriated Irish rugby supporters.

The living area got a bit noisy in the evenings.

But when a sliding door took you into the main corridor of the dormitory section, the noise halved. Then there was another sliding door to one of several side corridors, like carriages on a sleeper train, where the roomettes were located.

Being a light sleeper, I fully expected to be staring at the ceiling of the bunk all night, cursing the guy above for snoring or bumping furniture. But if there was anybody up there at all, I never heard him. To my own astonishment, other ambient noises notwithstanding, I slept well.

For many Irish fans, by the way, especially if they were 20-somethings who live in Dublin, Japanese accommodation would have been no challenge at all.

Multiple bunk beds to a room are not unusual in some of the rental kips they live in here, after all.

Given that and the cost of accommodation generally, I’m surprised nobody has so far opened a Dublin capsule hotel.

Although the concept is still dominated by Japan, it has since spread throughout Asia, and into Europe via Belgium and Poland.

If it hasn’t happened here yet, it’s probably coming.