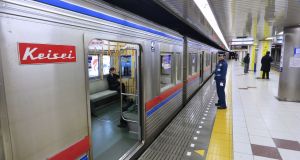 “It struck me that when the Tokyo metro service finished for the night, the train wouldn’t need cleaners.” Photograph: iStock

No doubt the surface decorum of Japanese life covers up a multitude of problems, and maybe it’s not always healthy. But it’s an impressive thing in its own right. And without it, a country as densely populated as Japan is probably couldn’t function.

There are 38 million people in Greater Tokyo. Imagine that many Irish (or Americans, with or without the guns) squeezed into a similar space. It wouldn’t end well – no single trip on public transport would be without a news incident.

Whereas in the Japanese capital, where 10 million commuters use the Metro daily, nothing notable happens for years on end.

If you saw somebody dropping litter on a train, that would be an event. But while I was there, I didn’t see even that.

Nobody crosses except at lights, and only then when the green man appears, traffic or no traffic

One night at around midnight, I had the Metro almost to myself as it neared the last stop. It struck me that when the service finished for the night, an hour later, the train wouldn’t need cleaners. Even at that hour, you could still have eaten your dinner off it.

Except you wouldn’t, because not eating on short-distance public transport is one of the unwritten rules of Japanese life, which is why trains look as they do.

Another rule, in this case reinforced by PA announcements, is that phones (and if possible passengers) should be switched to silent at all times. Apart from being mere good manners, this is to allow hard-working commuters catch up on sleep if necessary.

The veneer of courtesy extends to almost all other shared spaces too. Escalators, for example. Drivers on Irish motorways would benefit from even some of the lane discipline Japanese people have when using those.

The rule is that, if you’re not planning to walk on an escalator, you stay to the left, and leave the overtaking lane free. At peak times, this may mean queuing for the slow lane. People automatically do.

At street level, meanwhile, nobody crosses except at lights, and only then when the green man appears, traffic or no traffic. This was probably the single biggest adjustment first-time Irish visitors had to make last week.

I watched a small protest by a far-right nationalist group. Even that was polite

They sometimes had to avoid eye contact with each other, because it was so embarrassing to be just standing there, pretending you behaved like this at home. But the politeness was infectious. After a day or two, waiting for the light came naturally.

Even Tokyo drivers are well-behaved. Walking along the busy main drag in Roppongi one evening, I was nearing a traffic light when a small child ran past onto the street.

The pedestrian light was green, but they have a rule here that traffic may still turn on such corners, if no-one is crossing. Between that and my years of accumulated parental paranoia, I nearly grabbed the child to save him from certain death.

In Ireland, you could never be confident that, green man or no, some eejit driver wouldn’t come flying around the bend. Here, of course, they queued patiently until we were all across. The child’s parents strolled after him at leisure, 10 paces behind, unperturbed.

Another night, I took the Metro to Shibuya to see the famous crossing there, much used in films. Its celebrity is in part due to the riot of neon and video surrounding it, but mostly to the human spectacle of pedestrians criss-crossing at six angles (four roads and two diagonals), every 90 seconds, once the green man says go. Only in Tokyo could this happen.

As I say, maybe all this decorum masks hidden turbulence, just as the serene Mount Fuji is the symbol of a land notoriously prone to subterranean activity. One small counterpoint I couldn’t help noticing is that, as a man walking Tokyo’s streets alone, you get approached by an inordinate number of female strangers offering massages and other forms of stress relief.

And on a larger scale, historically, Japan’s war-time aggressions against Korea and other countries also remind us that they haven’t always been saints.

But speaking of war, from a Roppongi café last week, I watched a small protest by a far-right nationalist group. Even that was polite. They were flying the old rising-sun flag and holding posters alleging police brutality. As they took it in turns on a loudhailer, they were also the nearest thing to angry I had seen in Tokyo.

Nobody stopped to listen, however, except two policemen whose job that was. Then the six protesters dispersed quietly. At which point the police disassembled the plastic bollards that had cordoned them off from other footpath users, as if they had been a small but potentially hazardous roadworks scheme.

1 Nphet signals strong opposition to parts of Government plan to exit lockdown
2 Admission of mistake in Oxford vaccine dose raises doubts over reliability
3 Black Friday hotel deals: some of the best offers from around Ireland
4 ‘He’s Jekyll and Hyde’: The inside story of an Irish barrister and conman
5 Karlin Lillington: How I managed to cut my mobile phone bill by at least half
Real news has value SUBSCRIBE