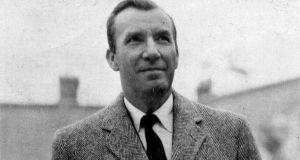 Cornelius Ryan: launched a phrase still used whenever people overreach themselves with disastrous results: “a bridge too far”

It’s 75 years ago this week since the battle that launched a phrase still used whenever people overreach themselves with disastrous results: “a bridge too far”. The expression was first uttered by Frederick Browning, the British officer usually blamed for the debacle at Arnhem, part of an allied attempt to break through into northern Germany and end the European war in 1944.

But that the phrase entered popular use is largely thanks to a Dubliner, Cornelius Ryan, who made it the title of his last best-selling book, published in 1974, which in turn became a big-budget Hollywood film.

Born in 1920, Ryan went to school at the famous Synge Street CBS around the same time that another future writer, Brian O’Nolan (aka Flann O’Brien), was starting there (mainly because O’Nolan – who was a decade older – did not enter formal education until age 11).

Thereafter, the two men had at least one other thing in common: they both became journalists in 1940, O’Nolan as a humour columnist with this newspaper, Ryan as a war correspondent, at first for the Daily Telegraph.

It was his war reportage that laid the foundation for Ryan’s vastly successful literary career, launched in the 1950s, by which time he was a naturalised citizen of the US, with his account of the Normandy landings, The Longest Day.

He always saw his books as just a more in-depth form of journalism, adding to his own wartime experiences by carrying out thousands of interviews with others who had been in or near the action.

His mastery of minutiae was not to everyone’s taste. A military correspondent for the New York Times once derided it as the “Fifi-Dupont-was-washing-her-drawers-when-the-American-tanks-arrived” style of war history. But Ryan was also called the world’s “most brilliant reporter”. And along with selling books in the tens of millions, he was arguably the true founder of New Journalism, the school of writing for which Tom Wolfe and Hunter S Thompson were later credited.

As for the doomed Operation Market Garden itself, launched on September 17th, 1944, aimed at seizing of a series of bridges on the Dutch-German border, Browning’s authorship should be shared with Bernard Montgomery, its overall commander.

In the months after D-Day, the big debate on the allied side was whether to proceed on a “broad front” – moving slowly east while mopping up all resistance – or a narrow one, pushing through dramatically somewhere and finishing the war early. Dwight D Eisenhower was in the former camp, Montgomery the latter.

In his eagerness for the bold, decisive thrust – and some final British glory at the expense of the Americans – he badly underestimated the German defences.

Browning, however, who commanded the airborne assault, had been given photographic evidence that two Panzer tank divisions were in waiting at Arnhem.

He should have tried to talk Montgomery out of it. But he either didn’t want to or, after many previous delays, didn’t dare. Instead the officer who supplied the inconvenient intelligence was sent on sick leave and the assault at Arnhem Bridge went ahead, catastrophically. Of 12,000 mostly British and Polish troops who took part, almost 1,500 died and another 6,500 were wounded or captured or both.

According to one historian of the battle, the Polish Parachute Brigade was scapegoated for the debacle: “a shameful act by the British commanders”.

And yet, even so, Montgomery afterwards insisted the operation had been a qualified success: an opinion that lingered thanks to war censorship until posterity, with help from Ryan, delivered a more damning verdict.

Among the heroes of Arnhem, by the way, was another Dubliner, Dr Martin Fallon, a high-ranking medical officer with the British army, subsequently awarded an OBE for his services to the wounded. And which school had he attended here, before going to Trinity College? Yes, inevitably, it was Synge Street CBS.

In later years, Fallon moved to Scotland (where his son Michael went on to become an MP and defence minister until a somewhat farcical downfall in 2017, begun by newspaper revelations that, during a dinner once, he had repeatedly touched the knee of broadcaster Julia Hartley-Brewer).

But Arnhem was only part of Fallon snr’s eventful war. It was he also who, in May 1945 removed a bullet from the hip of Lord Haw Haw, William Joyce, after the latter was shot while being arrested.

In a letter home to Ranelagh, Fallon joked grimly that Joyce was compensation for the loss of another celebrity patient, Heinrich Himmler, who days earlier had swallowed a cyanide capsule “and was being sown together in his blanket when I called at his house nearby”.

1 FinCEN Files: Dublin business features in leak of US treasury documents
2 Sam Bennett secures Champs-Élysées win and Tour de France green
3 The Sack of Balbriggan: The burning of a town that shocked the world 100 years ago
4 Coronavirus: 396 more cases as public is urged to help protect ‘older and vulnerable’
5 Mike Murphy: ‘I won’t do another over-70s lockdown’
Real news has value SUBSCRIBE