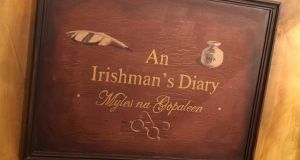 Sign in an Irish bar in Tokyo. “The sign’s most egregious myth is the suggestion that Myles ever wrote An Irishman’s Diary.”

You see many romantic legends on the walls of Irish bars abroad but the one pictured, which I found in the “Irish Times” pub in Tokyo recently, was a new one on me.

No, the legendary part is not the quill, although Myles na gCopaleen generally used a typewriter for his work. Nor is it the spectacles, another quaint literary accessory he somehow went without for his entire career.

No. The sign’s most egregious myth is the suggestion that he ever wrote An Irishman’s Diary, which I can say with some authority he did not, even once, in his 26 years with this newspaper.

The nearest he got to so doing was a notorious occasion in 1943 when, with the collusion of a subeditor, he broke the boundary dividing his own column from the diary – then stripped vertically down the page – and spent a paragraph on these premises, sneering.

His intrusion read as follows: “I think I’ll take a stroll over here – tear down a bit of the party wall. Here we go. Um, nice place. Pleasant cool civilised atmosphere, fountains dancing, the Campanile, Seneca, Greek metrics and cocoa, Francois Villon, mais ou sont les neiges d’anton. The only thing is the smell of Mr £nunc’s tobacco. Perhaps it is unmannerly to intrude. I think I’d better go back.”

And back he went. Quidnunc, the chief diarist then, was said to have been shaken but uninjured by the incident, while the conspiring subeditor is presumed to have been quietly shot. The diary’s walls were subsequently reinforced and security in general tightened. We have never had a break-in since.

Myles meanwhile resumed work in his own space, Cruiskeen Lawn, and stayed there for another 23 years. He wrote about 4,200 instalments of it in his time, the best of them at least on a par with his novels as Flann O’Brien.

But sic transit gloria mundi.  Such details are as irrelevant to the Irish pub abroad as the smoking ban introduced in Irish pubs here a generation ago.

I’m told that in Japan, new additions to the genre invariably include that smoke-stain-effect paint you see on the wall behind the sign.

Still, however warped the message, I’m glad Myles’s fame is being preached in Japan, because that country inspired some of his most interesting columns.

In a 1940 Cruiskeen, for example, when writing exclusively in Irish, he noted certain parallels between the policies of Japanese militant imperialists and Ireland’s Sinn Féin.

It seems likely this would have annoyed the latter more than the former, who may have too busy to read The Irish Times. Even so, in a follow-up, Myles claimed to have incurred the anger of the regime in Tokyo to the extent that they had published his advance obituary in a newspaper.

This led to another celebrated paragraph, in which he quoted from the supposed obit, using the original Kanji, possibly the only time Japanese script has featured in these pages. On closer inspection, however, – I’m indebted to Mylesian scholar Catherine Flynn for this – the paragraph was an apparently random selection of economics headlines, including “overview of the sugar-producing industry”.

Five years later, Myles returned to the subject in much more serious vein. That was in the wake of the atomic bombs, which an Irish Times leading article, by editor Bertie Smyllie, had blithely excused.

Outraged beyond humour, for once, Myles launched a counterattack from Cruiskeen Lawn suggesting, in the words of another critic Carol Taaffe, that only “sublimated racism” could have justified such slaughter of civilians.

The sin of the Japanese, he wrote, was “that few of them are Knights of Columbanus, Elks, or Rotarians, they are not afraid of death, they respect authority and live frugally. And they have manners.” Extolling at length the virtues of Eastern art and culture, he called his own editor “brave but foolish”. Then he advised him to “go east, young man [and] learn the value of contemplation”.

Cruiskeen Lawn subsequently disappeared for a week, Taaffe notes, presumably into an Irish Times prison camp.  But some of Myles’s Japanophilia must have rubbed off, inspiring in turn a landmark Irishman’s Diary, which Smyllie wrote frequently as “Nichevo”.

The fiercely pro-Allied editor was delighted once when Winston Churchill praised nine military and naval commanders for distinguished service, no fewer than seven of whom were Irish.

But wartime censorship forbade mention of Irishmen in British forces. So writing in the Irishman’s Diary, Nichevo described two of the nine as English and Australian. The others – O’Connor, O’Moore, Cunningham, Sommerville, Brooke, Dill, and Wilson – were all said to be “Japanese”, with the added legend “North Island” after the last three.