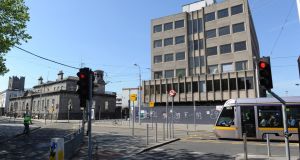 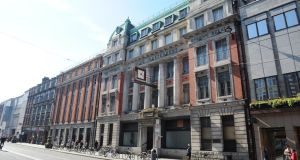 Independent House, the former headquarters of Independent Newspapers, on Abbey Street in Dublin is on the vacant sites register. Photograph: Aidan Crawley. 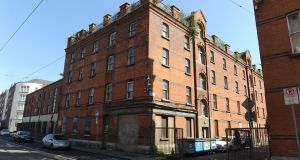 The old motor tax office, the former headquarters of Independent Newspapers and the derelict City Arts Centre are among almost 100 properties on Dublin city’s Register of Vacant Sites.

Local authorities have just one week to inform property owners they plan to impose levies on their vacant lands which could be used for the construction of housing.

However, just 13 of the State’s 31 local authorities have yet published any details of vacant sites in their areas.

Since January, local authorities have had the power to impose a levy on property owners who fail to develop prime housing land. The levy, set at 3 per cent of the value of the land for this year and 7 per cent for subsequent years, will be charged on vacant sites from this year. However, it is not payable until 2019.

Owners must be informed by June 1st of the intention of the local authority to impose a levy on their lands.

Dublin City Council, which petitioned the government in 2013 to establish the register to combat land hoarding by developers, has entered significantly more sites on its register than any other local authority. It last week added 27 more properties to its register, bringing the total to 98. Of these, a large number are State-owned sites, including 21 sites and buildings owned by the council itself.

Among those are some of Dublin’s most familiar landmarks, including Independent House on Abbey Street, the former headquarters of Independent Newspapers. Built for the newspaper in 1924, the ornate brick and stone protected structure served as the headquarters and printing works for the newspaper group up to 2003 when it was sold to a company headed by property developer Paddy Kelly and businessman Niall McFadden, then a shareholder in Arnotts.

The building was to have been part of the vast “Northern Quarter” retail district planned by Arnotts before the department store was taken over by the banks in 2010. Five years ago it was bought by retailer Primark, but has remained vacant since.

The six-storey building has been vacant since the motor taxation service moved out more than 10 years ago. Often rated as one of the ugliest buildings in the city, its appearance deteriorated even further in 2014 when it was damaged by fire.

Up to last year River House had been owned by developers Joe and Patrick Linders, who are best known for their involvement in the redevelopment of the nearby Smithfield area. While the Linders are still listed as the owners on the Vacant Sites Register, the building was sold last year to Jalaluddin Kajani, a Pakistan-born Irish citizen, whose company Melonmount Ltd last month secured permission to build an eight-storey 249 hotel building on the site.

Ellis Court on Benburb Street has also been added to the list this month. The city council-owned flat block, dating from the 1880s, has been derelict since 2005 having been severely damaged by a fire, in which a tenant died.

The former City Arts Centre, at the corner of City Quay and Moss Street, has also been added to the register. It has been vacant for more than a decade, having operated as a thriving arts centre from the mid-1980s to 2003 when the building was sold as part of dockland redevelopment plans to investment company Alanis Capital.

The company was involved with a range of high-profile property deals in Ireland and the UK during the boom years including Carton House, Co Kildare, the Square in Tallaght, Clarion Quay in the IFSC, Dublin and the Royal Exchange Building in London.