Newton Emerson: No GP should be allowed opt out of abortions

Conscientious objection amounts to saying ‘We don’t serve your sort around here, love’ 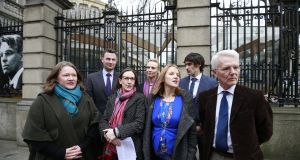 The Medical Alliance for a No Vote campaigning at the Dáil in March. ‘Enabling conscientious objection to abortion for medical professionals is not considered controversial in Britain and Ireland – but it should be.’ File photograph: Nick Bradshaw

The UK supreme court sat for the first time in Belfast last month, hearing an appeal into the “gay cake” case, among others.

“People will of course not expect an answer any time soon,” the president of the court said upon reserving judgment.

Another thing nobody expects is for the court to let bakers opt into a register of those willing to ice gay cakes, comprising only a handful of bakers in the country, with people obliged to travel to find them.

Yet that is exactly what Taoiseach Leo Varadkar is proposing for GP-led access to medical abortion, in response to lobbying from the National Association of GPs.

If this seems like a false equivalence because abortion is a far more serious matter than cake, that is all the more reason why women should not have to traipse around looking for a doctor who will deign to treat them.

The extraordinarily low number of GPs the Taoiseach foresees as needing to opt in – he cited “50 or 60” out of 4,000 in the State – may be enough in practical terms to cater for the national average of six patients per day. However, it sends an unmistakable signal of continued shame and marginalisation. There are many, many medical conditions that only crop up in a handful of doctors’ offices on any given day, so practicality is no excuse for singling this one out.

The Taoiseach clearly feels he is standing up sufficiently for women, because non-co-operating GPs will be required to refer patients to opted-in GPs.

To do otherwise would be saying “‘you are on your own love’, and we are not going to have that in Ireland any more,” Varadkar said.

But this is still saying “we don’t serve your sort around here love”, with official approval. Can the Taoiseach imagine any other public or private service where that would be acceptable – or legal?

Conscientious objection for GPs will mainly apply to the provision of abortion pills up to 12 weeks into pregnancy.

There will also be a blanket exemption for doctors, nurses and midwives who do not wish to carry out or assist any termination up to 24 weeks. This will mainly apply to difficult or dangerous pregnancies, creating a separate set of problems. Will hospitals have to keep a full roster of non-objecting staff on call at all times? Will emergencies only be dealt with at certain locations, and will they all have the same definition of ‘emergency’?

Enabling conscientious objection to abortion for medical professionals is not considered controversial in Britain and Ireland – but it should be, especially in a public healthcare system.

Withholding a lawful treatment on personal religious grounds is an extraordinary act of discrimination. The practice is associated almost exclusively with abortion and is a surprisingly recent innovation in law and medicine, almost unknown in the world before the 1967 Abortion Act in Britain.

Other countries that copied Britain have since had second thoughts – Sweden, Finland and Iceland no longer permit conscientious objection at all, while Portugal has banned it in public hospitals. The topic remains contentious even in the US.

The main flaw in the 1967 Act is that it has facilitated abortion on demand in the guise of protecting maternal health. So much denial and dishonesty surrounds this that it has become an enormous ethical mess.

However, all sides in Ireland’s abortion debate were aware of this flaw, and a desire not to replicate it informed the Government’s proposed legislation. Similar caution should be shown towards the 1967 Act’s conscience clause, which is equally problematic and outdated.

Northern Ireland might not have much to teach the Republic on abortion but it provides a warning on how unintentionally pervasive the concept of conscientious objection can be.

The morning-after pill has never been legally restricted north of the Border. NHS guidelines require it to be freely available and professional bodies forbid staff from withholding it.

The 1967 Act does not extend to Northern Ireland, meaning there is no statutory right to conscientious objection in any case.

Yet, in 2004, the BBC discovered that 13 of the North’s 15 emergency departments would not dispense the morning-after pill because some staff considered it a form of abortion, to which they felt entitled to object.

The report alleged a number of GPs and pharmacists were doing likewise. In a 1997 academic study in Northern Ireland, 6 per cent of GPs self-reported denying the morning-after pill and some forms of contraception on the same vague and erroneous grounds. The report’s authors noted how remarkable it was for any doctor to admit such a clear contractual breach of their duty to patients, and concluded the real figure must be much higher.

This is the inevitable consequence of letting medical professionals believe their religious views are more important than lawful, universal healthcare.

Better to follow the Scandinavian example and leave them in no doubt to the contrary.