David Norris: A generation of young men are free of guilt and shame 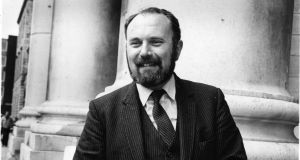 David Norris at the Supreme Court in 1983: “It has been my privilege to have been part of a social and human rights movement from inception to successful conclusion.” Photograph: Peter Thursfield

I have been involved in the gay movement for 50 years now. As such it has been my privilege to have been part of a social and human rights movement from inception to successful conclusion.

As a founder of the Irish Gay Rights Movement I also took charge of the legal section from 1973 onwards. Young people nowadays will find it hard to believe that men were arrested and convicted for consensual sexual activity. We dealt with many of these people, a lot of them married and from professional backgrounds. They faced personal, social and financial ruin. A marvellous solicitor, Garrett Sheehan, now a recently retired distinguished judge, came with me and represented them in court. Eventually we got to a situation thanks to Garrett’s forensic cross-examination that no convictions could be gained by the police.

I initially thought that we could persuade one of them to enter a constitutional defence, but understandably the last thing they wanted was more publicity, so we decided to build a case around my experience. I had had a collapse and was taken by ambulance to Baggot Street Hospital. My heart was perfectly all right but it came out that I was gay. I was sent to a psychiatrist who told me that my mental health would be threatened by the anti-gay law in Ireland. That gave me locus standi or the grounds for taking a case. The first brief was given by Donal Barrington who said that we were morally and intellectually right but that it would be a long and difficult road. My legal team consisted of John Jay, solicitor; Garret Cooney SC; Mary Robinson; and Paul Carney. Later I had great support from Prof Mary McAleese.

My part was to examine American precedents, and I also insisted upon introducing a large array of international expert witnesses such as Prof John Spiegel, head of the American Psychiatric Association at the time they removed homosexuality from classification as an illness, and DJ West, regius professor of forensic psychiatry at the University of Cambridge. Prior to this there had been complete silence in the media about homosexuality following the instruction of the medieval church that homosexuality was a “Crimen illud horribilie non nominandum inter christianus” (crime so horrible it must not be mentioned among Christians). As a result, day after day, we were front-page news effectively blowing away the veil of silence.

The judgment in the High Court was fascinating. The first part was almost a declaration of gay rights. Mr Justice Park accepted that there was a surprisingly high number of gay people in Ireland, that we were not less intelligent, that we were not child molesters, etc. But then he said nevertheless because of the Christian and democratic nature of the Constitution he had to find against me.

Off we went to the Supreme Court. In his judgment there, the chief justice found against us, as did two other judges. But we got two excellent dissenting views from Justices Niall McCarthy and Seamus Henchy. This opened the door to the European court where we won by one vote, the Irish member of the court voting against us.

After this decision, there was a five-year hiatus. This gave me the opportunity to lobby all members of the Oireachtas personally. When Máire Geoghegan Quinn became minister, Phil Moore a Fine Gael activist, who was the mother of a gay son, spoke to the minister as one mother to another and this was crucial. During the debate, the opposition put down some mean-minded discriminatory amendments. Geoghegan Quinn said in reply that as minister for justice she would need clear, cogent and factual reasons for introducing any measure of discrimination against an Irish citizen and as none had been produced she would not accept the amendments. This is the golden rule in legislation and goes beyond any question of sexuality.

In the 1970s, Mena Bean O’Cribben had said to me, “You won’t be satisfied with decriminalisation – the next thing you will be after is homosexual marriage”. I said, “Thank you madam, if you have any further ideas please let me know.” In 2003, I put down the first Civil Partnership Bill. When the government eventually introduced its own measure, I denounced it as a dog licence for which I was attacked by some gay leaders. But it is the responsibility of a human rights campaigner to go for the ultimate and not suck up to government for every crumb that falls from their table. There were more than 179 differences between marriage and the government’s proposal, including nasty linguistic affects – heterosexual couples entering civil partnership had their living accommodation described as the family home, whereas for gay people it was shared accommodation.

I have said that I spent so much time pushing the boat out that I forgot to jump on it myself and the next thing I saw was the boat rounding the harbour with little figures waving at me. I was on my own but the rewards were still there. A couple of months ago I saw two young men walking across O’Connell Bridge hand in hand and I thought, that is what it is all about. Now there is a generation of young men released from the guilt and shame experienced by men of my generation. We have had a wonderful victory in Ireland but we must never forget the many countries around the world, from Russia to Africa and the Islamic states, where gay people are routinely arrested, tortured and murdered. We will never be completely free until all gay people are free from persecution.

David Norris is an Independent Senator