Satanic Verses – An Irishman’s Diary about George Bernard Shaw, the Kennedys, and the Garden of Eden 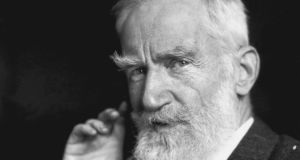 In the coverage of Robert Kennedy’s 50th anniversary, it was widely suggested that he was author of the famous phrase: “Some men see things as they are and ask ‘Why?’ I dream things that never were and ask, ‘Why not?’”.

The Guardian, for example, included it among a list of quotations from the “the slain senator’s works” to be read at a commemoration in Arlington National Cemetery. And why not, because as the same paper pointed out, it is one of two sayings inscribed on a granite memorial there, near his grave.

He certainly used the phrase a lot. During his doomed presidential campaign, it was such a regular feature at the end of speeches that it served as a cue, in the words of one of his team, “to let us know it was time to run for the bus”.

But as Bobby Kennedy was well aware, his brother Jack had used the line before him.

And as both of them knew, it had first been written by George Bernard Shaw, nearly half a century earlier. JFK acknowledged as much in his 1963 address to the Houses of the Oireachtas.

He prefaced the words on that occasion by calling Ireland “an extraordinary country”.

Then, by way of elaboration, he described how “Shaw, speaking as an Irishman, summed up an approach to life: Other people, he said, “see things and...say: ‘Why?”... But I dream things that never were – and I say: ‘Why not?’”

This expressed, according to Kennedy, the “remarkable combination of hope, confidence, and imagination” that was peculiarly Irish. So it’s funny that the phrase became much more associated with the optimism of the Kennedys’ America. But it’s even funnier that, as written by Shaw, the original line was spoken by the devil.

It occurs in Act 1 of his 1922 play series Back to Methuselah, wherein Adam and Eve have just found a dead faun in the Garden of Eden. Hinting at their own mortality, this triggers an existentialist crisis, during which the serpent appears and, via the shedding of its own skin, introduces Eve to the exciting new concept of regeneration.

At first sceptical, she is persuaded by the lofty rhetoric. “When you and Adam talk,” says the serpent, “I hear you say ‘Why?’. Always ‘Why?’. You see things and you say ‘Why?’ But I dream things that never were; and I say ‘Why not?’”

Thus, instead of being an encouragement to innovators, Shaw’s quotation should be a cautionary tale about the importance of cost-benefit analysis when embarking on new plans. And it is therefore ironic that what started me thinking about it was a phone call from Mary Caulfield of the United Arts Club in Dublin, about a new GBS-related project there

Before going further, I should point out that any other implied parallel between Mary and events in the Garden of Eden is unintended – although now I remember it, she was also deeply implicated some years ago in a virgin forestry project in Shaw’s honour.

Her idea then was that, as a vastly prolific writer of letters, books, and plays, he had been responsible for the deaths of many trees.

So to redress the balance, while commemorating him, she raised the several thousand pounds necessary for them to plant 100 new ones.

It is thanks to her that Dublin’s Phoenix Park has a magnificent, mature oak grove dedicated to GBS, even if – as with some of his best lines – the correct attribution of the trees may now be lost on most people.

That could be Shaw’s fate in microcosm. Despite his fame, he is not much read or performed any more. Not compared with his prime, certainly.

The cerebral, literature-loving Tunney was such a friend of Shaw that, when the former married, the latter went with him on honeymoon

If there was a world heavyweight championship of literature, he would have held the title once, and for many years, perhaps until losing it controversially in the 1920s to his compatriot James Joyce.

This is fully intended. The cerebral, literature-loving Tunney was such a friend of Shaw that, when the former married, the latter went with him on honeymoon.

Tunney is also unusual among world heavyweight champions in having once visited the aforementioned United Arts Club.

Shaw, of course, was a major supporter of the club. So when the idea arose for an annual lecture there, he was an obvious candidate to be the inaugural subject.

The event takes place next week, on June 22nd, and the speaker will be Fintan O’Toole of this parish.

More details can be had from dublinarts.com