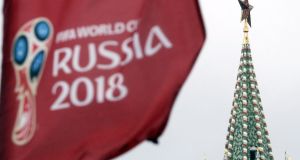 A flag with the logo of the Fifa World Cup 2018 in front of the Kremlin in Moscow. Photograph: Maxim Shipenkov/EPA

The approach of another World Cup means it will be four years next week since I became a retired car owner, with permanent effect (so far). I’m reminded of the anniversary because the last tournament, in Brazil, was partly responsible.

On the evening in question, I was rushing down the M1, hoping to get back to Dublin in time for the Spain v Chile game. Then, just north of the airport, my engine died. I had to park in the hard shoulder and ring a pick-up company from a hotel, where I watched Chile win 2-0. It was the end of an era for that great Spanish team. Their engine had burned out too.

I didn’t plan to become an ex-car-owner then. But the weather was good, the kids were off school, and Parisian-style bicycle socialism had just arrived in my neighbourhood, in the form of a Dublin Bike station.

This was followed, soon afterwards, by one of those urban GoCar things, rentable by the hour. Meanwhile, of course, there were lots of places within walking distance where you could hire cars for longer trips, when required.

So I was in no rush to replace my engine, or indeed the whole vehicle.

Then one thing led to another, and now suddenly I find it’s Russia 2018.

I measure my life out in World Cups, or at least I used to do. The ones from my youth all carry intense memories, especially Argentina 1978, where the cascades of paper from the stands are now inextricably linked with the hormonal chaos of being a teenager.

With adulthood, chronological inflation began to set in, so that single years seemed to pass in the time months used to take. But the four-year World Cup cycle was still hard currency, with epochal changes guaranteed from one tournament to next.

A decade later, however, even four-year periods started to elapse with alarming frequency. In the process, looking back now, it becomes harder to distinguish individual tournaments of that period.

I would have no recollection of 1998, for example, except that (a) I was working the night of the final and (b) someone had had the terrible idea to organise an office pool based on possible final scores. This was a bit lame, of course, because most of the allocated score-lines were implausible, including mine, which had France beating Brazil 3-0.

That still seemed unlikely as late as the 93rd minute, when France led 2-0, but were down to 10 men and defending hard.

Then they scored a breakaway third with seconds left, whereupon I ran a lap of the Irish Times newsroom in celebration and only just resisted the temptation to do a knee-slide on the carpet.

Saipan aside, the tournaments since are mostly a blur.

But getting back to the elimination of my car during the group stages of 2014, the intervening period has been a four-year-cycle in more ways than one. There is a certain satisfaction in that milestone.

Leaving the World Cup aside for now, but staying with cycles, my Dublin neighbourhood was spectacularly inundated with them on Wednesday evening because of the Nick Cave concert at Royal Hospital Kilmainham. I didn’t notice their arrival, being indoors at the time. Then I went for a walk, mid-show, and was astounded by the levels of bike parking.

They were everywhere: locked to poles, railings, each other, and any piece of immobile street furniture people could find. It was like Patrick Kavanagh’s dance at Billy Brennan’s Barn, except that here, clearly, the bikes had gone by in two and three hundreds.

Strolling up Kilmainham Lane, which is half hedgerow, I could have been on Inniskeen Road, shut out of the céilí, like the poet. Okay, Cave’s music is not quite jigs and reels.

Among the songs drifting over the hedge, and typical of his oeuvre, was The Mercy Seat: a jaunty number about a religious maniac facing the electric chair and being surprisingly cheerful about it.

Even so, having failed to get a ticket, I could empathise with Kavanagh’s exile: “A road, a mile of kingdom. I am king/Of banks and stones and every blooming thing.”

My old car, by the way, is now a blooming thing. It’s still where the pick-up truck dropped it and, every so often, I have to remove moss and other vegetation that has started to sprout from its crevices. I suppose I should get rid of it soon. Sometime before the end on the World Cup, I’ll organise a closing ceremony.