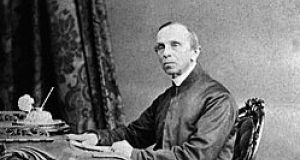 Fr Vladimir Pecherin: features in Dostoevsky’s writings, at least as an influence on other characters

In a week when Ireland votes on whether to remove the concept of blasphemy from the Constitution, it may be interesting to recall a trial from the 1850s, in what is now Dún Laoghaire, involving an extraordinary Russian priest named Vladimir Pecherin.

Pecherin is one of those people of whom it might be said that he was a like a character from the novels of Dostoevsky.

But in his case, that would be an understatement, because he really did feature in Dostoevsky’s writings, at least as an influence on other characters.

In The Idiot, for example, he is probably the “one secluded thinker” referred to by the intellectual drunkard Lébedyev, an admirer of his anti-materialist views.

Elsewhere, in The Devils, Dostoevsky parodies a Pecherin in a poem, The Triumph of Death, in the guise of a youthful work by one of the book’s protagonists, circulated privately in defiance of the authorities.

Born in 1807, in modern-day Ukraine, Pecherin (sometimes spelled “Petcherine”) grew up in an optimistic period for Russia, when the defeat of Napoleon was followed by a period of liberalisation.

Then, after crushing the Decembrist revolt of 1825, the old regime reasserted itself under Tsar Nicholas I, whose repression would blight the adult lives of Pecherin and Dostoevsky alike.

The latter’s most infamous encounter with the tsar was a mock execution in 1849, when he and other members of the “Petrashevsky Circle” were lined up in a St Petersburg square, facing a firing squad until, a moment before the expected shots, a messenger arrived with an order commuting the sentence to exile in Siberia.

By then, Pecherin had long since abandoned Russia, and a promising academic career, for voluntary exile in the west.

After tasting freedom as a philosophy student in Berlin, he had returned to Moscow as a professor, but lasted only a year, before quitting the country forever in 1836.

A self-proclaimed republican and communist, he spent the next four years wandering the continent in poverty, keeping company with assorted fellow radicals. Then he shocked his circle by converting to Catholicism, shaving his beard, and joining the Redemptorists. The rest of his life was spent first in England, then post-Famine Ireland, where he had initially travelled as part of a preaching mission to Limerick.

In the impoverished Irish, he found surrogates for his own benighted countrymen. The locals returned his affection, flocking to hear him preach. His oratory was said to be spell-binding, although he soon left the Redemptorists in favour of a more contemplative life, most of it as a chaplain in Dublin’s Mater Hospital.

The blasphemy trial resulted from one of his earlier enthusiasms here; when in Kingstown, as it then was, he mounted a campaign against immoral literature. Parishioners were encouraged to hand in any books, newspapers, or periodicals deemed suspect.

And having gathered enough to fill two wheelbarrows, he burned the material publicly in the grounds of the parish church.

That this happened on November 5th, 1855 – the 250th anniversary of the Gunpowder Plot, when English Protestants must have been immolating effigies of Guy Fawkes with even more feeling than usual – may have been mere coincidence. Either way, a sectarian sub-plot was detected, when onlookers claimed to have seen Protestant Bibles in the pyre.

To the mere burning of the Holy Book was added the dubious company in which it was alleged to have gone up in flames.

So amid great sensation in Dublin, Fr Pecherin was tried for blasphemy at Green Street Court, where Emmet had made his speech from the dock.

Attendance was by ticket only, and the event attracted huge media coverage in Ireland and abroad.

But despite an array of witnesses for the prosecution, the case was not proven. Pecherin’s acquittal was greeted raucously by followers, who cheered, threw hats in the air, and lit torches to celebrate. One reporter wrote that the “exultation of the lower orders [...] beggars all powers of description”.

The trial appears to have marked the height of Fr Pecherin’s notoriety in Ireland. Mater chaplaincy aside, his later years were quieter, devoted to the life of the mind and writing.

But he was a life-long rebel, who continually questioned his own beliefs, including Catholicism, with which, as with many things, he grew disillusioned.

He never quite shook off Russia, regularly corresponding with friends there. His reflective letters home contributed to a memoir, known in English as Notes from Beyond the Tomb) which could not be published in Russia during his lifetime, or long afterwards. He died, still in Dublin, in 1885, and was buried in Glasnevin Cemetery.