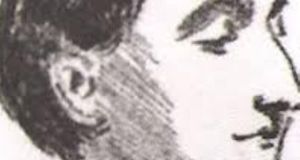 Among his many other distinctions, the writer and journalist Seumas O’Kelly (circa 1880-1918) was one of the few Irish people who could be said to have been a victim of both the Troubles and the first World War. He wasn’t a combatant in either, exactly. But of the manner of his premature passing, 100 years ago next month, one admirer later commented: “He died for Ireland as surely and as finely as if he had been shot by a Black and Tan”.

On the other hand, the events that killed him were a direct result of the 1918 Armistice, making him also, arguably, one of the last casualties of the Great War.

Aged only 38, but weakened by rheumatic fever and a heart condition, O’Kelly had been working as usual that November day, deputy-editing the Sinn Féin newspaper Nationality in place of Arthur Griffith, in jail in England.

Meanwhile, Dublin’s loyalists were celebrating, some of them riotously. Amid the union jacks flying everywhere, the tricolour on Sinn Féin’s offices was considered a provocation. So a group of off-duty soldiers, Trinity students, and “separation women” – so-called because of the Separation Allowance that supplemented whatever their army husbands sent home – stormed the building.

Harry Boland, who was also there, turned a hose on them, while the editor defended himself with the walking stick to which he had been reduced.

Alas, O’Kelly suffered either a cerebral haemorrhage or heart attack – accounts differ – or both. Whatever it was, he never recovered. His funeral in Glasnevin became a show of force by republicans, to whom he was now a martyr. As PS O’Hegarty, author of the “Black and Tan” comment, put it: “He died at his post.”

Born in Loughrea, O’Kelly was a prolific writer throughout his short life, much of which he spent in newspapers. During a spell at the Southern Star, he was Ireland’s youngest editor. He later also edited the Leinster Leader, Saturday Evening Post, and (very briefly) Sunday Freeman.

In between all that, he wrote plays, poetry, novels, and short stories too. His first story collection attracted the notice – albeit sarcastic – of James Joyce, who had shared a class with him in UCD and complained that O’Kelly’s characters were all “beautiful, pure faithful Connacht girls and lithe, broad-shouldered open-faced young Connacht men”. Happily, Joyce recovered from his early distaste to admire O’Kelly’s more mature work.

As a playwright, O’Kelly wrote for the Theatre of Ireland, a kind of anti-Abbey, for which his The Shuiler’s Child was a big success in 1909.

Socialist and feminist in outlook, the play centred on the adoption of a workhouse child and featured a famous performance by Máire Nic Shiubhlaigh as the mother, although The Irish Times also noted that the role of would-be adopter was “very well and amusingly filled” by one Countess Markievicz.

O’Kelly’s specialty was recording everyday speech, particular as spoken in his native Galway. Another writer from that county, Lady Gregory had been less successful at capturing what Yeats called “that beautiful English of the country people who remember too much Irish to talk like a newspaper”. She was mocked for inventing her own language: “Kiltartanese”. O’Kelly, by contrast, had a finely-tuned ear. What is now considered his finest work was a novella unpublished in his lifetime. The Weaver’s Grave (1919) is the story of a widow and two elderly gravediggers who stumble through a decrepit cemetery in search of the widow’s husband’s grave. As one critic said: “What might have been a sentimental episode becomes, in O’Kelly’s skillful telling, a tragically moving tale.”

It was for the likes of this that, in 1971, O’Kelly was described by another literary commentator as “Ireland’s most neglected genius”. But if he was neglected then, the situation has not improved much in the intervening half century. He’s all but forgotten now.

He will no doubt be recalled next month in the pages of the Leinster Leader, which despite illness, he returned to edit after the 1916 Rising when his brother Michael, who had succeeded him in the job, was interned. As for more formal commemorations, I’m not aware of any yet. Neither is PJ Lawlor, who wrote to me urging a mention for O’Kelly in the run-up to his anniversary.