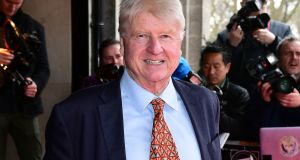 He was channelling Margaret Thatcher, or at least suggesting that it’s what she would have said on the subject, although even Margaret Thatcher might have thought twice about so brazenly ignoring any British contribution to Ireland’s problems, past and present.

Yes, there have been periods when the violence here could have been summarised as “Irish people shooting each other”. November 1922, for example, when the Free State government was executing Erskine Childers and other anti-Treaty republicans in one the bitterest phases of the Civil War.

But the Irish were not the only Europeans killing each other then. The Turks, for example, were at it too. That same month, militant nationalists in British-occupied Constantinople kidnapped a man called Ali Kemal, a minister in the colonial government who was considered a collaborator.

He was being brought for trial in Ankara, but never got there. En route, a lynch-mob dragged him off the train and beat him to death.

Stanley Johnson knows about this because Ali Kemal was his grandfather. The dead man’s son, Osman Wilfred Kemal, was instead brought up by an English grandmother, maiden name Johnson. In time, he adopted that surname and also dropped the Osman, transforming himself into Wilfred Johnson: father of Stanley, grandfather of Boris.

But apart from the need for sensitivity about other countries’ troubled histories, is there anything else our Brexit-challenged times can learn from this sad story?

Well, one other possible moral in the tale is the advisability of caution, always, about British political manoeuvring. For it seems that poor old Ali Kemal was a victim of that as well as the mob. He had dreamed of a Greater Turkey emerging from the ruins of Ottoman Empire, including Greeks, Armenians, and Kurds: “That was why he supported the British, in whom he put his faith. But at the time, Lloyd George was really after the partition of Turkey [into] Greater Greece, Greater Armenia, even an Anglo-Kurdistan [...] There would have been a rump Turkey, run by a puppet sultan. Ali Kemal was the puppet of a puppet. Everyone, including himself, let him down.”

That quotation is from an impeccable source: Britain’s conservative, pro-Brexit Spectator magazine, whose editors have included Boris Johnson.

It was written in 2008, when the latter was running for London mayor.

We know Boris is proud of his Turkish heritage. Two years ago, in a Letter from Istanbul for this newspaper, Lorraine Mallinder interviewed his cousin, Sinan Kuneralp, who was somewhat at odds with his politics but recalled affectionately the then young Englishman’s visit in 1984.

Kuneralp drew his attention to the Bosphorus Bridge: a great British-engineered project of the 1970s that, when complete, was the first such link between Europe and Asia since a pontoon structure built by Xerxes the Great (519-465 BC).

The subject was calculated to inflame the imagination of an Oxford classics student.

Sure enough, Boris subsequently wrote a “very erudite piece” about it for the Economist.

It may be inflaming his imagination still. He recently proposed another great bridge between historically warring civilisations, although cynics suggest this one might be a bigger engineering challenge than the one across the Bosphorus.

A bridge between Britain and Northern Ireland would likely have to cross the 300-metre deep Beaufort’s Dyke, a sort of natural border in the Irish Sea (with apologies to the DUP).

And even if that were not insurmountable, there’s another problem: a million tonnes of British military munitions dumped in and around the dyke over the past century which, as they destabilise, blow up regularly.

A study of seismic activity there during a 12-year period to 2004 recorded 186 explosions. That might be a concern for engineers. It certainly makes the dyke an excellent metaphor for the dangers of forgetting history.

Speaking of which, and getting back to poor Ali Kemal and the great British carve-up of the Ottoman Empire, the Spectator’s admirable summary, as quoted above, also makes for instructive comparison with the cover of the magazine’s latest issue.

In a cartoon that sets new European records for irony, this features Michel Barnier, Donald Tusk, and other EU plotters gathered menacingly around a map of Britain and Ireland, and drawing lines on it. The caption reads: “Divide and Rule”.

1 Donald Trump's taxes: US president paid $750 federal income tax the year he won the election
2 ‘I never suspected that, aged 29, I’d be lost’
3 Hello Eir, is anybody there? Four unhappy customers complain
4 Covid-19: Possible extra restrictions for four counties to be decided by weekend
5 Graham Norton: ‘I wanted out, out, out of Ireland’
Real news has value SUBSCRIBE