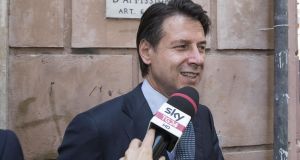 Italian prime minister Giuseppe Conte leaves his house in Rome, on Friday. The prospect of an autumn election in Italy has receded for now. Photograph: EPA/Massimo Percossi

A successful populist is a master opportunist. But, as in chess, his success also owes something to his opponent’s missteps, his short-sightedness, his weakness for walking into traps. Across Europe, wherever populists have broken through, the formula applies. Look at Italy. The turmoil of the past week provided a neat case study in how the centrist European elite, even while consumed by angst over the insurgent political forces ranged against it, has a habit of playing into their hands.

For the past two weeks, as coalition negotiations picked up pace in Rome, it appeared that the two political groups that together have shaken Italian politics in recent years – the anti-establishment Five Star Movement and the anti-immigrant League – were about to go into government together. It would have been a defining moment for Italy but also for Europe.

For more than a decade, populist parties on the left and right in several EU states have joined mainstream opponents in coalition or propped up more centrist administrations from the opposition benches. A League-Five Star coalition would have been the first all-populist government in western Europe since the current wave began. Given Italy’s size and significance – its economy is the fourth-largest in the EU – that was a big deal.

For many, it was also an alarming prospect. The coalition agreement was a radical and extravagantly incoherent checklist that reflected the internal contradictions of its signatories: the mercurial Five Star Movement, which was founded by a comedian as a bit of a lark and draws support from both left and right, and the ultranationalist League, which started out as a virulently racist regional party. They planned to cut taxes, lower the retirement age and introduce a guaranteed income for the poor. They also pledged to carry out mass deportations and, in foreign policy, struck a strong pro-Russian tone.

The deal all but assured new clashes with Brussels. It called for a review of EU treaties, repatriation of powers to member states and a relaxation of EU budgetary rules. But it also stopped short of calling for withdrawal from the euro, despite the fact that both Matteo Salvini and Luigi Di Maio, leaders of the League and Five Star, respectively, had previously floated the idea.

Having waited patiently as the two parties worked out their programme in the wake of the inconclusive March election, Italian president Sergio Mattarella threw a grenade into the process last weekend when he refused to accept the 81-year Paolo Savona for the role of finance minister. Citing Savona’s declared opposition to the euro, Mattarella said he had to step in to protect Italians’ interests – and their savings – given that neither the League nor Five Star had campaigned on withdrawal from the single currency.

Mattarella appears to have gambled that the parties would simply nominate someone else. They didn’t. Instead, for much of the week, a snap election appeared inevitable. Markets baulked. European capitals grew nervous. Overnight, a political crisis had become a constitutional one.

Eventually the parties managed, at Mattarella’s urging, to salvage their deal and on Thursday evening they presented him with a new list of ministerial nominees, which he accepted – defusing the immediate crisis and averting an early election. But the episode was instructive nonetheless. Constitutional lawyers spent the week debating whether Mattarella had the right to veto Savona’s appointment, but perhaps more important was whether it passed the smell test.

For a majority of Italians, according to opinion polls, it didn’t. It simply looked like the establishment trying to stymie the democratic will of the people. That was naturally how the League and Five Star portrayed it. Indeed, some believe Salvini, whose support has risen during the coalition negotiations, engineered the crisis in the hope that new elections would return the League as the biggest party.

To make matters worse, Mattarella lined up a former IMF banker as stand-in prime minister in the event of the coalition deal collapsing. As Yanis Varoufakis, the former Greek finance minister, put it, he had thus presented “a fantastic gift” to Salvini’s party.

Foreigners who should know better showed the same tin ear. Emmanuel Macron unwisely welcomed Mattarella’s decision, while European budget commissioner Günther Oettinger remarked that market unease would be a “signal” to voters “not to vote for populists on the right or left”. (Oettinger later apologised.)

“These people treat Italy like a summer colony where they come to vacation,” Di Maio wrote on Twitter. “But in a few months a government of change will be born and Europe will finally respect us.”

The prospect of an autumn election has receded for now. But the coalition will be fractious and disjointed, and may not last for long anyway. Far better to allow it implode and discredit itself, however, than for the old establishment to be seen to be trying to undermine it – and frustrate the wishes of the majority who voted for it – before it has even got to work.