Ireland must listen to Citizens’ Assembly on climate change

Following the abortion vote, the assembly’s environmental proposals must be implemented 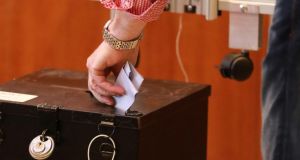 A member of the Citizens’ Assembly casts his vote. The assembly has demanded that planning for climate mitigation be placed at the heart of government. Photograph: Nick Bradshaw

Democracy, said George Bernard Shaw, “is a device that ensures we shall be governed no better than we deserve”. For all its many strengths, democracy suffers some egregious flaws. The ability of powerful interest groups, be they political, economic or ideological to “capture” the democratic process and to drown out genuine deliberation in the white noise of spin and fake news represents a clear threat to the healthy functioning of any democracy.

This is where deliberative democracy comes in. The concept that underpins it is the notion that democracy cannot simply be the process of counting ballots after a shouting match. True democracy requires that people make informed decisions, guided by the best available evidence, freed as far as possible from the bullying and badgering of special interests.

It would be naive in the extreme to imagine that such a utopian democratic process could be applied to entire populations. The mob that howled and jeered throughout the recent Claire Byrne Live television debate would quickly dispel any notion that well informed, calm deliberation of complex and contentious issues occurs spontaneously, or is even easy to create.

Difficult, yes, but not impossible. Then taoiseach Enda Kenny in November 2015 made a fateful pre-election promise to convene a citizen’s convention to tease out a number of thorny social and political issues, and to bring forward recommendations for the Oireachtas to discuss and debate through its committee system.

A more cynical view was that this was really about TDs taking the opportunity of offloading political hot potatoes into a toothless talking shop. However, the government’s appointment of the formidable Justice Mary Laffoy, a retired Supreme Court judge as chair was the first real hint that the new Citizens’ Assembly meant business.

The assembly, comprising 99 randomly selected Irish citizens, balanced for age, gender and location, received more than 13,000 public submissions on the Eighth Amendment, from individuals and lobbyists alike. From these, 17 organisations representing the spectrum of views were invited to make presentations.

The assembly was also resourced by a five-person expert advisory panel drawn from legal and medical backgrounds. The citizens then discussed the issues among themselves in a structured round-table format, where everyone’s voice was heard and all views taken into account.

Those who may have quietly hoped the assembly would be an exercise in futility will have been disappointed. The assembly’s radical recommendations on abortion took the media and politicians almost completely by surprise, prompting claims from groups supporting the amendment that the process had somehow been “fixed”.

Even non-partisan observers appeared stunned that a group of completely ordinary Irish people could, having listened to submissions from all sides, and guided by independent experts, come to conclusions so completely at variance with the stated positions of every major political party. Concerted efforts were made by conservative politicians to undermine the credibility of the assembly, including unproven allegations of foul play in how people were recruited.

They got their answer on May 26th last, when the referendum results showed a thumping majority of Irish people were every bit as “radical” in their views on women’s right to choose as the much-maligned assembly members had been. Deliberative democracy in Ireland had finally delivered, on the biggest stage of all.

Early last November, the assembly reconvened in Malahide and set about teasing out the tall task of “Making Ireland a leader in tackling climate change”.

Once again, the assembly members were briefed over four intensive days by national and international experts, while a representative sample of members of the public who had made submissions was also invited to present. The back of the hall was thick with industry and agribusiness lobbyists, listening intently but, for once, powerless to shape the agenda.

The lobbyists had good reason to be anxious: the assembly delivered a series of 13 strong recommendations on tackling climate change, with 80 per cent prepared to accept higher taxes on carbon-intensive activities, including levies on high-emissions food such as beef and dairy. And figures published this week by the Environmental Protection Agency paint an extraordinarily bleak picture of Ireland’s absolute failure to even begin to tackle emissions.

The assembly demanded that planning for climate mitigation and adaptation be placed at the heart of government, rather than in its current cul de sac under reluctant “climate action” Minister Denis Naughten. There was also strong support for investing in cycling and public transport, retrofitting, community-led renewable energy and climate-friendly agriculture, including organic farming.

This demand for true ambition on tackling climate change is the considered view of a representative sample of our fellow citizens. That it chimes precisely with what every major scientific agency and academy in the world has been saying for the last several decades makes it all the more poignant. The people have spoken. Are we ready, finally, to listen?