Una Mullally: Young women already being written out of the story of repeal

The victory belongs to everyone but any analysis that does not place at its centre the feminist, women-led movement is bereft 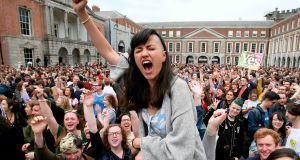 Sixty-six per cent was phenomenal. The resounding nature of the “Yes” vote surprised some people, and not others. But what is more remarkable was the increase in turnout among women aged 18-24 in this referendum compared with the last general election in 2016: 94 per cent. All together now: wow.

One of the most astute comments on this trend came from from Andrea Horan, founder of the Hunreal Issues. “You can’t wonder why there aren’t more young women caring about politics if nothing you do targets them,” she said.

“There were so many elements and groups in this campaign that created content and stories that infiltrated where young women are, not waited or corralled them into spaces they don’t want to be in.”

The Irish Times editorial headlined “This belongs to the women of Ireland” was correct. It sure does. It belongs to those who were part of a movement, women, men, trans people, everyone together for yes.

But now the battle of the narratives begins. Last Monday on Seán O’Rourke’s programme three men talked over me as I questioned why the conservative Iona Institute was given such a large platform throughout the campaign. My main thought was “not again”.

In the aftermath of the marriage referendum, LGBT rights were co-opted by conservative politicians, especially Enda Kenny, who walked around the place like Harvey Milk while Labour and the Greens (who fought for civil partnership) silently screamed behind the invisible glass that still separates them from mainstream political discourse today.

People marched, volunteered, canvassed, raised funds, donated, wrote, shared their experiences, and campaigned to rid this country of the Eighth Amendment and change our nation forever. What many are now feeling is the dull, tedious frustration of having their own stories told to them.

There have been some excellent pieces written in the aftermath of the referendum. But a blinkered analysis also persists. One that sidelines or does not place at its centre the feminist, women-led movement which fought for, ran, and won this referendum. Any analysis that does not place that movement in the foreground is bereft.

We could of course shrug this off, and roll our eyes, but this stuff matters. Hopefully history will be written by those who understand the long, multifaceted, collective effort that created a movement that was as flexible as it was resilient, and welcomed all allies and participants before it honed its focus in a campaign.

I am interested in the grassroots, the movement, the 94 per cent and beyond that. I am interested in a movement made up of people who did everything they could to get this over the line. The vast array of organisations and individuals who came together.

This movement ended as a mainstream one while constantly being told it was on the fringes. We changed the world with marriage equality, we changed the world with this referendum, so what else can we achieve? The marriage equality movement changed Irish politics in that it gave momentum not just to the potential of repealing the Eighth, but trained up a generation of canvassers, and engaged young people who gravitate towards issues, not parties. Who will speak to that 94 per cent now? How can we as a society sustain that political engagement?

If you’re searching for a bigger picture party-political analysis, here is mine: Fianna Fáil’s leadership has always been the rooster on the weather vane of Irish politics, spinning in the direction of wherever the votes are. But three of the most incredible recent moments of social change in this country – marriage equality, the Gender Recognition Act, and repealing the Eighth Amendment – have been ushered in by Fine Gael.

That party has established itself as an astute political magpie, raiding the nests built by what vaguely constitutes the left and settling down snugly once the danger has dissipated and popular opinion prevails. Fine Gael offered leadership because they were in power at the time. The youth of Fine Gael’s key figures is also relevant. They are part of Generation Yes. Well done to them, and everyone else.

Sinn Féin emerges from the referendum as the only large party with a woman leader, now swooping down to grab female voters and the middle classes for whom Gerry Adams is already a memory.

So there you go, an avian political metaphor about women’s rights that didn’t even mention a cock crowing. You’re welcome.

For everyone else, tearing one’s hair out – while being told No voters are being demonised (they’re not) or Repealers are bitter and gloating (they’re not) – is the natural state of an aftermath like this.

But the pie cannot be divided because it belongs to us all. The territory cannot be claimed because we are all living in it. It was a collective victory driven by a national movement, the energy of which might waver, but will not disappear.