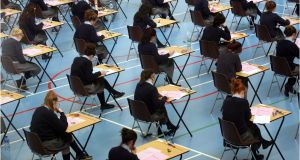 A key issue with our obsession with the Leaving Cert is its main focus seems to be acting as a filter for entry into higher education. Photograph: Dara Mac Dónaill

There was a telling moment towards the end of a Government press conference the other week when Ministers were justifying their plan to reopen schools for Leaving Cert students.

Minister for Education Norma Foley explained the rationale at a time when Covid-19 infection rates were soaring out of control.

“It is the overwhelming wish of all that we would return to the traditional Leaving Cert,” she said. “It is what the children are being educated for at present.”

The world’s worst coronavirus outbreak was in full flow – and it still couldn’t shift this sadistic rite of passage at the end of secondary education.

Our priority, then, seems not to be educating students to become creative, problem-solvers or engaged citizens who can develop their skills and talents in the broadest sense.

It’s to prepare them for a Leaving Cert exam which is narrow, inflexible and doesn’t capture the wide range of students’ intelligence.

The dangers of relying on a set of exams – where so much assessment rests on final written exams – was starkly illustrated last year.

Yet the system seems determined, still, to plough ahead despite huge uncertainty and rising anxiety over future public-health threats.

So, why is there so much official reluctance to consider alternatives? How is it that our view of educational assessment has shrunk to the point where a rigid, outdated, high-stakes exam is seem as the only valid option on the table?

We’re culturally obsessed by the Leaving Cert. We believe in the exceptionalism of the exams. The idea of deviating from anything else, then, seems perilous and fraught with risk.

It results in a kind of peculiar madness. How else to explain why the idea of vaccinating healthy Leaving Cert students – ahead of more vulnerable members of the population – was seriously floated at Cabinet, according to media reports.

The usual argument in favour of holding the Leaving Cert is that it is the overwhelming choice of everyone in the education world. The exams are tough, but fair. They command high levels of public trust.

Really? Students are entering their fourth month of online learning of a two-year senior cycle. Many are struggling. The Irish Second Level Students’ Union is now calling for an alternative to the exams.

Sixth-year students are facing into the exams on a grotesquely unequal playing field. A study by the Economic and Social Research Institute, based on the experiences of schools during the last lockdown, found poorer pupils suffered the largest learning losses. Disadvantaged pupils were less likely to benefit from quiet study spaces, have access to computers or have decent internet connectivity.

In the UK, lessons have been learned from last year’s predicted grades controversy

There was a much greater reliance in these schools on phones to learn; teachers were more likely to have use the post or other physical means to provide feedback to students. This year, many schools are simply not at the races when it comes to online tuition. Staff have not been trained to use e-learning platforms and access to remote teaching is patchy.

The contrast with some of the State’s affluent private schools is striking. One fee-charging school has spent more than €2 million on developing live and interactive online classes for its students.

As for trust in the exams? The way exams are graded is anything but transparent. A recent research paper found that the Leaving Cert marking process was “rushed”, “unfair” and risked “compromising the accuracy of students’ grades”. The way results are standardised makes the marking scheme for exams “less valid” and “reduces fairness” by benefiting some students and penalising others. The author of the report? The State Examinations Commission.

We also know the exam and related Central Applications Office points system generates high levels of stress and anxiety among students and their families. A report by the National Educational Psychological Service last year found Irish students have much higher levels of exam-related stress than students in other developed countries. Almost half of teenagers felt nervous and stressed when thinking about the exams, while a quarter reported feeling physically unwell.

A key issue with our obsession with the Leaving Cert – as the Organisation for Economic Co-operation and Development recently reported – is its main focus seems to be acting as a filter for entry into higher education. “It is not clear how senior cycle is at present preparing students for the future beyond sitting the Leaving Cert,” it said. This ends up diminishing valid alternatives such as the further-education sector and apprenticeships.

At a time when we’re persisting with the “traditional” Leaving Cert, the UK has announced the cancellation of end-of-school exams over recent weeks.

Authorities there are currently drawing up options for alternatives to ensure every young person gets a fair grade for their work, with the expectation that teacher assessment will be used. Lessons have been learned from last year’s predicted grades controversy.

Over here, there are lot of sound ideas around reforming the exams and broadening the assessment process. They are being examined as part of a sweeping review of the senior cycle, but they likely won’t happens for years. In the meantime, a good first step would be for decision-makers to acknowledge early on that insisting on a “traditional” exam will not be fair to many students and that alternative options will be available this year. The Leaving Cert does not have to be the be-all and end-all.

Carl O’Brien is education editor of The Irish Times