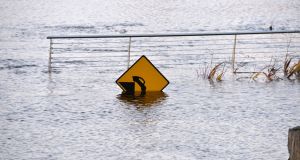 Childhood came with a barrage of warnings. You couldn’t pull a funny face without being warned that the wind would change, and your face would stay like that forever. Photograph: Alan Betson

Just as the caterpillar turns into the butterfly, so too do we turn into our parents. My metamorphosis reached a crucial stage this week when I heard myself muttering “I’ll swing for you,” at the quickly-retreating dog who had left a golden puddle on the wooden floor. It was a phrase I hadn’t heard in several decades but one which was regularly thrown at us children whenever we did something to infuriate our parents. Some dusty cavern in my brain had been storing it up all those years, ready to deploy it at a key moment.

Just like the dog, we weren’t unduly bothered by the threat and it never occurred to us to ask what it meant. But now I wondered about its significance. Had my mother been saying my behaviour was so bad that she was quite willing to kill me and be hanged for the offence? That’s quite an escalation from threatening to put your child on the bold step. And a slight overreaction to leaving the lid off the jam jar.

Gary Martin, who runs the phrases.org.uk website writes that “swing” has been slang for “hang” since the 18th century and was defined as such in the New Canting Dictionary in 1725. He came across the first printed reference in the Lady’s Magazine in 1787.

It was in an extract from a comedy in which a woman sensibly decides against murdering her husband, saying, “it is not worth while to swing for him”.

A more benevolent interpretation of the phrase suggests the speaker is threatening to throw a punch at the offender but the Oxford English Dictionary also favours the “executed by hanging” explanation.

That wasn’t the only threat made to the much-maligned children of the 1970s and 1980s. We were often told that people would have our guts for garters. That too, went over our heads, but it has even more gruesome origins. In the early 1800s, entrepreneurial serial killers would use the intestines from their victims to make garters and sell them on market stalls.

You may well wonder how we ever grew into relatively well-adjusted adults, after hearing such threats.

Many homes had the wooden spoon but we in the countryside had access to a wider range of implements. We were occasionally asked if we wanted the sally rod. This was a coded warning that the aggrieved parent would cut a stick from the willow tree and use it to chastise us if our behaviour didn’t improve. We always politely declined the offer.

Childhood came with a barrage of warnings. You couldn’t pull a funny face without being warned that the wind would change, and your face would stay like that forever.

You couldn’t wave a ruler around casually without being warned that you would take someone’s eye out with it. I’m still waiting to meet someone whose eye was plucked out by an errant ruler. Or someone who contracted a life-threatening cold in their kidneys from sitting on an innocent-looking wall.

And of course every Irish adult worth their salt has once been warned by a parent not to come running if they fall and break a leg. There truly was danger at every turn, back then. If you watched television, well you might never leave the house at all. Obviously, you were highly likely to wander into quicksand because it seemed be around every corner, according to the programmes we watched.

I also lived in permanent fear of the witch from Wanderly Wagon, and fretted over bumping into a skunk in case he sprayed his smell all over me.

If you managed to avoid the quicksand and the skunks, there was always the risk of being abducted by aliens who seemed to be circling the skies more often than Aer Lingus in those days.

And that’s before you watched those public service ads. Getting to adulthood without your nightdress catching fire seemed like a major challenge. If your mother didn’t have a rubella injection, you could have a nun shouting “bah” into your ear as you sat there, oblivious to the noise.

Falling into a barrel of water was an ongoing worry and of course you could never leave Grandad dozing at the river with the radio teetering dangerously on the riverbank or it would be a case of “Where’s Grandad?” on your return. That empty deckchair has sent shivers down the back of many Generation X children.

Getting lost in the Bermuda Triangle was a worry we stored up for the future, if we were lucky enough to survive the burning nightdresses, chip pan blazes and alien abductions.

Yet here we are, still surviving, despite the obstacles strewn in our way.

After coping with Covid-19, we would hardly break into a sweat if we got stuck in a patch of quicksand. The children of today need not fear an alien invasion for many years to come for what aliens in their right mind would approach Earth now? And if they do, we can quickly dispatch them by waving a few rulers around in a dangerous fashion and tossing a few highly-flammable nightdresses at them as they make a swift exit.