Into the light – An Irishman’s Diary on Harry Clarke 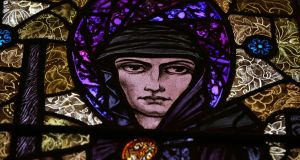 Ninety years ago this week (January 6th), in a remote Alpine village in Switzerland, one of the most gifted stained-glass artists in the world passed away. He was just 41 and was buried in a local graveyard, where he now lies in an unmarked grave. The artist was Dubliner Harry Clarke, and he died trying to make his way back to Ireland after spending months in the Alps treating his tuberculosis.

His experience shines a light on a rarely spoken of practice in early 20th-century Ireland when hundreds of Irish people, who had the means, travelled to mountainous villages in Switzerland to avail of a controversial “cure” for TB which involved long exposure to the mountain elements, particularly sunlight.

Clarke had suffered ill-health since childhood but that did not hinder his artistic development. His father had moved from England and set up a business as a church decorator and manufacturer of art objects. Working in his father’s studio, the young Harry showed early promise as a draughtsman and artist.

After briefly attending the Royal College of Art in Kensington, he won a scholarship to the Irish School of Art. As Nicola Gordon Bowe detailed in her excellent biography of Clarke, the young artist began to win awards and recognition for his stained-glass design and book illustrations.

Completion of the Honan Chapel windows in Cork marked a turning point in his career. At this time he also created illustrations for a limited edition of the fairy tales of Hans Christian Andersen, which brought him even more acclaim.

As his career progressed, his health deteriorated. He suffered from tuberculosis but also bouts of general ill-health, exacerbated by exhaustion.

In 1929, he left Ireland for the Swiss mountain village of Davos to attend one its 16 sanatoriums.

There were so many Irish citizens recuperating in Davos that they formed the Irish Davos Circle with their own publication, the Torque, of which Clarke was a founder member and illustrator.

The Davos “cure” consisted of long hours of rest, often on large balconies filled with rows of invalids in portable beds, taking in the dry mountain air and absorbing copious amounts of sunlight.

Gordon Bowe quotes from a 1930 edition of the Torque, which notes that the “cure” required a lot of time – light cases up to six months, and severe cases longer, sometimes much longer.

Clarke was in Davos for 14 months, away from his wife and family in Ireland. But his condition worsened.

In early January 1931, he left Davos for Dublin. It is believed that he knew he was dying or else he wouldn’t have taken on the long journey in the depths of winter, but was prepared to risk it to get home.

He only got as far as the Swiss village of Chur where he died on January 6th, 90 years ago. At his own request he was buried there. His family erected a headstone but it only survived 15 years. Some have speculated that this was because Clarke wasn’t a Swiss national; others that his family didn’t realise that a payment had to be made to maintain the grave.

Whatever happened, no memorial now exists of Clarke in the graveyard in which he is buried. For those of us who have admired his work and his genius, this seems strange.

I first became aware of Clarke while attending primary school with the Patrician Brothers in Carrickmacross, Co Monaghan. A teacher one day mentioned in class that some of the windows in our local church were “works of art” by a world-famous Irish artist.

It was a time when the closest thing we had locally to world renown was the boxer Barry McGuigan, and even he was from Clones! I asked the teacher which windows were Clarke’s and visited the church to see them. I continued these irregular visits throughout secondary school and beyond.

Despite my limited artistic abilities, I was drawn to images and colour in photography or art. I always remember the window depicting St Ceara standing out as something quite special, as it does today.

My interest in Clarke heightened when I later found out that he grew up in Phibsborough on the northside of Dublin. My mother was also raised there, opposite the Mater Hospital, and just a few hundred yards from North Frederick Street where the Clarke family lived.

When work brought me to live in Switzerland a few years ago I was able to visit Chur. It struck me as a lovely old rugged mountain town, off the well-trodden track of tourists heading from Zurich to Davos. I found the beautiful old cemetery where Clarke is buried, surrounded by snow-capped mountains for most of the year. A peaceful place to spend eternity.

I also visited Davos a couple of times. I was there for the World Economic Forum when the streets are full of traffic jams and all the shops are closed and have rented out their premises for corporate events or presentations. I experienced Davos the event, not the town. I got no sense of what it’s really like, never mind what it might have been like for Clarke a century ago.

I looked for the Victoria Sanitorium in Davos Platz where Clarke stayed but was unable to find any trace of it.

Early last year I met Michael Gaffey, the Irish Ambassador to the UN in Geneva, and we had hoped to have a memorial event for Clarke in Chur this January to mark the 90th anniversary, but then wretched Covid upset those plans.

I am also in touch with some of Clarke’s family around the globe, all immensely proud of his achievements and keen too to see some recognition in Switzerland.

Whether this comes to pass or not, it is fitting to remember this great artist on the anniversary of his death and to continue to savour his unique legacy on display in churches and galleries around Ireland and the world.