Michael McDowell: Response to Trump’s claims must be measured

Freedom of speech is a fundamental value, but taking responsibility for publications is equally important

The US Capitol was put on lockdown as crowds protesting US president-elect Joe Biden's victory breached security barricades while Congress was debating the certification of Biden's electoral win over Donald Trump. Video: Reuters 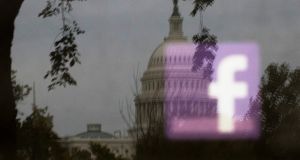 The US Capitol visible beyond the reflection of a Facebook logo from an advertising board, in Washington DC: Broadcast and print media can’t spread sedition or defamation without consequence. Why should social media be wholly immune from such controls? File photograph: Tom Brenner/The New York Times

Some years back, Dr Mary Aiken asked me to launch her bestseller The Cyber Effect. It made a compelling case for the utterly transformational social and psychological potential and dangers of the online revolution. It underlined the huge damage that wholly uncontrolled online activity could inflict on society if left to itself.

We must now address the political cyber effect. Last week’s events in Washington exposed dramatically the vulnerability of organs of liberal democracy to the online revolution.

In his inflammatory harangue to the besiegers of the Capitol, one of Trump’s themes was excoriation of the fake media which he claimed were suppressing the size of the mob which he put at “hundreds of thousands”. Not for the first time, but possibly for the last, he made a ridiculous claim concerning the size of a turnout in Washington. By irony, those false claims neatly book-end his disastrous, shameful presidency.

The political cyber effect cannot be ignored. The contagion of QAnon is largely the creation of the online world. Online anonymity is at best a dubious thing. Crazy conspiracy theories, such as a hidden paedophile elite intent on the destruction of Trump, can spread online just as swiftly as mutations of corona virus travel in our globalised world.

Utterly groundless claims that Democrats stole the election have infected about four in 10 of American minds to one degree or another. That is of epidemic, while not pandemic, proportions. Is it an asymptomatic, fleeting condition or will it be like “long Covid” – a long-lasting and debilitating disorder?

We are waking up to the very real challenge that so-called social media can pose to the very foundations of liberal democracy. Mass manipulation of 40 per cent of Americans to believe that Trump actually won in November is itself a very grave matter. Even if it represents wishful thinking rather than deep-seated conviction for a large cohort of disappointed voters, it is deeply poisonous. For a gullible minority, it was a compelling call to arms, an evil genie that may not return to the lamp.

Blame for the storming of the Capitol is not solely to be laid on Trump’s tweets or on QAnon postings. Fox News had a significant role in publicising the stolen election narrative. So too did many Republican members of Congress such as Ted Cruz, Josh Hawley and their craven fellow exploiters of the lie.

Now it is fashionable to speak of controlling the excesses of social media. Five years ago, such an idea would have been dismissed as reactionary and dangerous – even totalitarian. The pendulum is swinging against online libertarianism seen as a threat to liberalism.

Making Facebook or Twitter legally responsible to some extent for content posted by users is likely. They are not completely analogous with telephone or postage services. They are publishers – not mere conduits.

Broadcast and print media are held responsible somewhat for their content. They can’t spread sedition or defamation without consequence. Why should social media be wholly immune from such controls? While we may argue about Irish defamation law and its reform, nobody argues that we should have a libertarian free-for-all in conventional media for damaging and dangerous content . That is because libertarianism is as much a threat to liberalism as is totalitarianism.

I must confess to sharing the unease of some commentators about the permanent banning of Trump from posting on social media. It comes very, very late in the day when a lot of the damage has already been done. Deletion of his dangerous postings (as distinct from attaching warnings to untruthful postings) would probably be more proportionate.

Truth and untruth have always coexisted in human societies. But for any form of social cohesion and democracy to exist, there has to be some shared, even if blurred, common consciousness of what is real.

We must tread carefully now. The Capitol insurrection was a warning. But any liberal democratic response must be measured. Freedom of speech is a fundamental value. But taking responsibility for publications is equally important.

A reader’s letter recently published here queried why anonymous comment is permitted online in the Irish Times, while it is denied in the print edition. Why is there such a difference? It is not an issue of space. There is a difference of values. The tone and content of online posting is radically different where anonymity is afforded. Does anonymous inanity, crudity, political trolling or abuse deserve to be published or posted?

The unique value of our conventional media is their editorial quality. Article 40 of the Constitution correctly states, in the context of freedom of expression of convictions and opinions, that free media as organs of public opinion have a role and responsibility of “grave import”, namely the “education of public opinion”.

That statement remains a vital truth.