Despite perception, State is not right-wing but exemplary in being socially democratic 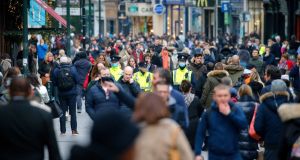 Shoppers on Grafton Street: The idea many have of Ireland as a uniquely badly governed and unsuccessful country is one that our peers would not recognise. Photograph: Crispin Rodwell

One of the most corrosive trends in western democracies – a social and economic problem that has impoverished millions of ordinary people and fuelled the rise of far-right populists from the US to Britain to Europe and beyond – is the rise of economic inequality.

In many countries, ordinary working people have seen their incomes stagnate while elites secured larger and larger slices of the economic pie, growing the gap between rich and everyone else and unravelling social coherence.

Remarkably, Ireland has bucked this trend. Yes, you read that right. Inequality is falling in Ireland, and has been for years. This is true in the medium term – over the last quarter century – and in the longer term; OECD data published earlier this year found that while inequality had increased from one generation to the next in most countries, in Ireland it was the opposite.

In fact, Ireland had seen the biggest fall in income inequality, one of the chief components of overall economic inequality.

We have been getting richer, and also more equal at the same time. This is a neat trick, managed by very few

The UCC economist Seamus Coffey has written extensively about this phenomenon. And while many of the issues surrounding this debate – because of the obvious political implications – are contested territory, the data is the data, the facts are the facts.

Tasc, the left-wing economic think tank, publishes an annual survey of inequality, and in the 2020 edition, commented on Ireland’s “non-conformism” to the “trend of rising inequality in most countries”, suggesting the explanation lay in the extraordinary economic progress of the Celtic Tiger period. Whatever the reason, the Tasc report says, “while inequality was on the rise elsewhere, it was falling here”.

And what is truly remarkable about Ireland, as Coffey points out, is that the falling inequality has come at a time of strong income growth. In other words, we were getting richer, and also more equal at the same time.

It is important to observe that none of this means that poverty is not a problem in Ireland. We have very obvious problems with child poverty in particular, with lack of opportunity, with inter-generational deprivation and there is, you will hardly need me to tell you, a problem with people – who need them – not receiving adequate services from the State.

But it does mean, I think, that the idea many people seem to have of Ireland as a uniquely badly governed and unsuccessful country – a failed state, almost – is one that our peers would not recognise. Nor is it, frankly, supported by a cool-headed look at Ireland and the world.

These are not things that just happen; they result from political choices. The growth in incomes, for example, stems from a thriving economy. Now governments cannot produce economic growth by fiat – like all good policymaking, it is the product of good decisions made over a period of time, by patience, by far-sightedness, by the gradual accretion of acts of good government.

Protecting the pillars of a strong economy – stable public finances, settled policymaking, investment in long-term capacity, both physical and intellectual, sensible planning – these require governments to do the right thing, rather than the easy thing.

In the coming years, this government – and probably the next one – are going to have to decide how to pay for the larger State that will result from the pandemic. They will be faced with choices; and those choices will not always – or ever – be easy. As the Government’s budgetary watchdog, the Irish Fiscal Advisory Council, pointed out this week, much of the great public spending expansion we have just witnessed will entail recurring costs, which will have to be met from somewhere.

And those answers will have to be found against the backdrop of a public debate whose strong point is not, to put it mildly, acknowledging the economic and fiscal realities that face every government, of whatever hue. Coffey asks why is Ireland’s performance on inequality not reflected in public debate. The answer, I think, is because our public debate can often be hopelessly skewed away from reality.

To point out that Ireland’s recent budgets – which have directed available resources overwhelmingly towards State investment, welfare increases and public services – are what the rest of the world would call social democratic is to invite many lectures about how right-wing Ireland’s governments are. But spending almost your entire budgetary package on public services is simply not what right-wing governments do.

Economic trends are the tides of politics; sometimes – as in 2008 – they have the force of a tsunami. Ireland and the world have been hit by another economic tsunami in the past nine months. So far the defences have held, largely protecting our societies; we just don’t yet know what the bill for them is going to be. But however all this plays itself out, economic questions will form the central choices of our politics in the coming period. How do we know that? Because they always do.

Our public debate and political system tends to overrepresent the priorities of powerful special interests, whether they are the professions, the multinationals, the public sector trade unions (currently lining up for another pay deal) or Ireland’s remarkably prolific NGO sector.

Sometimes our media only amplifies those voices, without context. Those who shout loudest in powerful ears tend to be ones who are heard. I think our country would be better off if our debates were more grounded in reality. Acknowledging the successes as well as the failures of past governments would be a start.