Equality and doing no harm predate Enlightenment and French Revolution 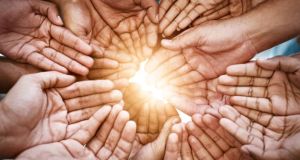 Many social ideas strongly rooted in the heritage of Christianity go beyond mere justice to include care for the poor, the homeless and the migrant.

A recent letter to this newspaper contended that “the logical outcome of all Catholic politicians following Catholic teaching in their political lives” was a “theocracy”. The writer invoked memories of an old Ireland when some Catholics in politics declared themselves bound to obey the rulings of their church in their decision-making.

Then, presuming causation and ignoring the possibility of similar miseries elsewhere, he linked poverty, emigration, censorship, cruelty to women and children etc with “this theocratic Ireland”.

Theocracy is a system of government where priests (not politicians) rule in the name of God or a god. Where laws command support from a religious majority but are oppressive to a religious or non-religious minority, you have crude majoritarianism, not theocracy.

But linking religiously influenced ideas with theocracy has propaganda value. If you don’t like what religious values inspire some people to think, you can suggest that they are not thinking for themselves at all.

Many of the values we most cherish in the western world, from racial equality to concern for the poor, do not stem from the Enlightenment or the French Revolution. They have deeper roots in the Christian revolution.

Other social ideas strongly rooted in the heritage of Christianity go beyond mere justice to include care for the poor, the homeless and the migrant

Long before the Declaration of the Rights of Man and of the Citizen (1789), the Spanish Dominican friar Bartolomé de las Casas (1484-1566) saw the evils committed by European conquerors in the Americas and understood that St Paul’s words that “there is neither slave nor free” meant that human beings had rights that must be respected by everybody.

Critics of the Catholic Church often struggle to grasp that its faithful may draw on this heritage when formulating ideas about the common good; that in thinking for themselves they might be intellectually persuaded by what their church proposes.

Consider laws on marriage, or right-to-life issues as they affect the welfare of third parties. Here, the church’s perspective on the common good is easily shared by non-believers. The famous rationalist, John Stuart Mill, posited that the only purpose for which power can be rightfully exercised over any member of a civilised community, against his will, is to prevent harm to others.

This idea sits harmoniously with Christian notions of protecting the vulnerable, and of the legitimacy of restraining your freedom and mine in order to do so.

Other social ideas strongly rooted in the heritage of Christianity go beyond mere justice to include care for the poor, the homeless and the migrant. These values are so widely held that we don’t even bother to inquire into their origin among us.

They have prevailed to varying extents outside of Christian civilisation. But if you have any doubt about how they came to influence our culture, read a history of the Roman Empire.

There are, of course, aspects of Catholic or Christian social teaching where reason alone does not seem to bring the point home without the guiding light of faith.

If you think we are just chemicals, you may reason one way. If you believe that we are beloved children of God, you may argue differently

Christians need prudence here. People have the right to present their ideas on whatever basis they like. “Because God and the church says so!” could be reason enough for one, just as “Because there is no God and anything goes!” may be sufficient argument for another. But these are unhelpful, unconvincing, extremes.

If you are promoting the common good, it is futile to advocate public policy on grounds that cannot be supported by people of goodwill of different faiths and none.

There are challenges for everybody here. Believers must accept that not everybody shares their idea of a god who demands justice, charity and ultimate accountability. Atheist champions of “reason alone” may struggle to locate a higher value by which to justify their admirable condemnation of survival of the fittest and neglect of the poor.

Our starting premises are not easily provable, but they set the compass for our thoughts. If you think we are just chemicals, you may reason one way. If you believe that we are beloved children of God, you may argue differently. If you believe in a god that is not loving, then God help us all.

Most of us are ready to agree that human life and human dignity are sacred. We may continue to wonder if this is a religious or a rational worldview, or both. And then we have to debate the application of that vision to our policies and laws.