Pat Leahy: Government needs a reboot – whoever leads it 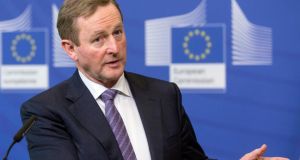 Taoiseach Enda Kenny. ‘The sense that the Government is in control of events and making progress on social and economic problems seems to be diminishing rather than growing.’ Photograph: AP

The former Fianna Fáil spin doctor and strategist, corporate consigliere and bon viveur PJ Mara died just over a year ago. Mara always maintained that one of the reasons voters kept returning to Fianna Fáil in the pre-crash era was that they believed the party had a basic competence in governing.

Voters didn’t really care about policy debates or the ethical questions that clung to some Fianna Fáil politicians, Mara believed, an analysis he would share in colourful terms. They just wanted someone to run the country and, above all, oversee the economy.

If they thought Fianna Fáil could do that, it would be enough for a lot of voters.

It was his fear that the party’s reputation for economic confidence would be lost forever as a result of the economic crash.

Moreover, he was concerned that the reputation would transfer to Fine Gael. For a time, it seemed his fear was well founded.

The Fine Gael-Labour government’s record of economic competence was hard won in the years after the crash.

It was poor political management (beginning with the Garda and water controversies in 2014, which remain largely unresolved three years later) and a clumsy overselling of its own message that prevented it from capitalising on it.

There was a basic contradiction between Fine Gael’s position as the party that had made the tough but necessary policy decisions which fixed the economy but that was then willing to splurge on tax cuts and public spending in order to be re-elected.

Politicians sometimes misunderstand the expectations of the public.

People will put up with a lot from their politicians; they do not, after all, nurse especially high opinions of them. But they do expect a basic competence.

It was the lack of basic competence in dealing with the McCabe controversy that pushed Enda Kenny over the precipice in recent weeks.

Had he and his Ministers been able to present a coherent account of their actions from the word go, the affair would not have morphed from another Garda controversy into a political crisis which will ultimately claim the head of the Taoiseach.

But the sense that the Government is in control of events and making progress on social and economic problems seems to be diminishing rather than growing.

Last week, it was reported that the cost of the new National Maternity Hospital is expected to rise to €300 million, a doubling of the previous estimate.

The Dáil was also told that the estimated cost of the new National Children’s Hospital has risen to €1 billion. The Government and the HSE shrugged, saying the figures were “commercially sensitive”.

They don’t look that commercially sensitive to me. You can bet that they are going to increase further.

The response of the Minister for Transport to the impending meltdown of half the public transport system is that it’s none of his business.

Last week’s Cabinet agenda was threadbare. Public sector unions must be gleefully anticipating negotiations on a pay deal with a Government that has rolled over when challenged on the issue.

Perhaps the greatest challenge facing Fine Gael as it faces into a leadership contest is to restore the idea that it is competent in government.

True, the Government does not command a majority in the Dáil, and that makes legislating a more protracted and painful business. But it doesn’t make it impossible.

Nor does it explain the creeping stasis in Government, something privately confirmed by both politicians and officials.

Things don’t work in government unless there is a constant focus on targets, deadlines, actions and delivery.

Much of the system is inclined towards comfortable tranquillity, rather than dynamic industry. Perhaps it is the way of all big organisations.

But it is not inevitable. During the period of the bailout of 2010-13, when the business of government was conducted in concert with the troika, there was a rigid adherence to the programme of policy actions agreed with the lenders.

Right across government, people had to meet regular and unforgiving deadlines for the preparation of legislation, introduction of reforms, review of spending programmes and so on.

The troika formally assessed the progress of the bailout plan every quarter and published their results. (Indeed, they sued to hold press conferences until they endured the wrath of Vincent Browne once too often).

But the work of government on the programme was supervised on a continuous process.

Day after day, week after week, month after month, civil servants had to answer emails and take phone calls, reporting either to the troika’s representatives in Dublin or – often more fearsomely – to officials in the Taoiseach’s or Tánaiste’s office, or the departments of Public Expenditure or Finance.

One of the enforcers once told me how he would berate officials who failed to meet deadlines, because he would then have to go into a meeting with the troika and explain to them why such and such hadn’t been done.

Over the coming weeks, the candidates for the leadership of Fine Gael will set out their views on the future of the party and the country. That is a useful and important exercise. But they should also be drawing up practical plans for bending the machinery of government to their will.

They should be formulating, not just a high-minded vision, but a plan for implementing it. Because without a serious reboot of this Government that establishes a basic competence, its days are numbered, no matter who its leader is.

Campaign in poetry, as they say, but govern in prose.

1 Covid-19: Cabinet looks to tighten travel restrictions and decide on pubs reopening
2 Vicky Phelan: ‘There was a time when I hated being a mother – I would have gladly walked away’
3 Five Covid-19 clusters found among Irish fruit and vegetable growers
4 David Trimble: After the big dinner in Oslo, somebody said why don’t we party together?
5 Dún Laoghaire home of renowned acting mentor Betty Ann Norton for €1.5m
Real news has value SUBSCRIBE