Diarmaid Ferriter: Boris should spare us the patronising praise 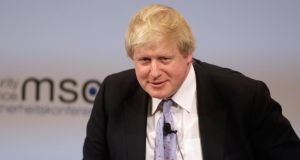 There has been much justifiable comment in recent years about the extent to which Anglo-Irish relations have improved, but maybe you can have too much of a good thing.

That was the conclusion I came to on receiving a bizarre invitation earlier this month.

It was from the British ambassador to Ireland, Robin Barnett, to a reception in the British embassy in Dublin “to congratulate those who delivered the remarkable 2016 commemorations”.

I found that idea inappropriate and patronising, so I did not attend, and that is just as well, because it was subsequently reported that at the reception a letter was read out from the British foreign secretary, Boris Johnson.

In it, he praised the commemorations as they “struck exactly the right note”, with “the utmost tact and delicacy combined with a profound understanding of the past and its relationship with the present” as well as “an abiding sense of reconciliation”.

Johnson also wrote that it was “entirely fitting” that President Michael D Higgins had attended events to mark the centenary of the Battle of the Somme.

Indeed he did, but perhaps Johnson missed the speech by President Higgins last year when he referred to the violent, “supremacist and militant imperialism” of Britain a century ago.

Johnson always has a fine welcome for himself and Britain’s glorious past.

He was centre stage in the Brexit referendum and trumpeted all sorts of damaging nonsense about making Britain great again, “getting our country back” and insisting “now is the time to believe in ourselves, and in what Britain can do, and to remember that we always do best when we believe in ourselves”.

What a monstrous lie that is, or what the late journalist AA Gill more gently dismissed as “snorting a line of that most pernicious and debilitating Little English drug, Nostalgia”.

We, of all people, should be aware of the potency of that drug given the record of British imperialism in Ireland and other colonies.

Britain’s historical view of itself manifests itself in numerous other dishonest declarations during the Brexit campaign, including the Conservative MP Liam Fox’s risible assertion that “the UK is one of the few countries in the EU that does not need to bury its 20th century history”.

Two years previously in a similar poll, 34 per cent said they would still like Britain to have an empire, a stark reminder of the need for a proper history of British imperialism to be taught in British schools.

Johnson idolises Winston Churchill and sought to defend his imperialism by writing in his 2014 biography of Churchill, that “his language on India sometimes seems unhinged, but you have to bear in mind that he saw the Raj as a restraint on barbarous practices”.

But Churchill was simply vile in his racism towards the Indians: “I hate Indians. They are a beastly people with a beastly religion.”

In Bengal, between 1943 and 1944, three million died of starvation and Churchill joked about it, saying they “must learn to look after themselves as we have done . . . the starvation of anyhow underfed Bengalis is less serious than that of sturdy Greeks”; it was the Bengalis own fault, he claimed, for “breeding like rabbits”.

A recent history of British imperialism in India suggests the numerous famines under British rule amounted to a “British colonial holocaust”. In his own words, Churchill also saw the Irish as a people who needed to be “managed” and dealt with “according to the consciences and conviction of the English people”.

How, he wondered, could an Irish republic be ceded to “ a miserable gang of cowardly assassins like the human leopards of east Africa?”

Johnson has in the past referred to black people as “piccaninnies” and Africans’ “watermelon smiles”.

He has also maintained that in relation to Africa, “the problem is not that we were once in charge, but that we are not in charge any more”.

While the 1916 Rising was commemorated in Ireland, Johnson made a speech to the Conservative party’s conference, which asserted: “The world needs Global Britain more than ever as a campaigner for the values we believe in.”

That assertion needs to be rejected emphatically, especially by those who were subjected to British imperialism.

Johnson’s letter to the British ambassador this month announced that the British government was willing to give “any assistance that may be needed for any centenary events in 2017 and beyond”.

Thank you very much Boris, but I think we can manage on our own, and please spare us any more condescending pats on the back in relation to commemoration of the fight against the British empire that you so sentimentalise.

1 Dancing with the Stars has hit Father Ted levels of farce
2 Storm Dennis washes abandoned ‘ghost ship’ onto rocks off Co Cork
3 Forget a grand coalition – here is what the next government will most likely look like
4 Caroline Flack death: Public disquiet over media conduct grows
5 Fine Gael faces internal resistance to a grand coalition with FF and Greens
Real news has value SUBSCRIBE