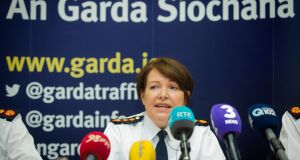 Garda Commissioner Nóirín O’Sullivan has repeatedly said she did not sanction, order or support a smear campaign against Garda whistleblower Maurice McCabe, as one of her senior officers alleges. Photograph: Gareth Chaney/Collins

The alarming revelations about the treatment of Sgt Maurice McCabe demonstrate that trust has completely broken down between the Government and the leadership of the Garda Síochána.

This is a constitutionally intolerable situation. Important decisions that affect people every day are made by ministers for justice and governments based on what they are told by the Garda.

In a modern state, few relationships are as important as that between the elected political leaders and the security services – the safety and security of society and of individual citizens depends on it.

That relationship is now broken down, imperilled by fear and a lack of trust among politicians in what the leadership of the Garda tells them.

Think of it like this. In previous years, before the era of scandal washed over the Garda like a murky tsunami, any Garda commissioner could tell a minister for justice: “These are the facts. There is no reason for you to be concerned. We have investigated this and we are satisfied” – and be reasonably sure that his words would be accepted by the minister.

That is no longer the case. Garda Commissioner Nóirín O’Sullivan has repeatedly said that she did not sanction, order or support a smear campaign against the Garda whistleblower McCabe, as one of her senior officers alleges.

She has said it in public and – we can presume – in private to Frances Fitzgerald.

The Minister’s response, and that of the Government, has been to say: “That’s fine, thanks.

“We’re not saying we don’t believe you, but we are going to appoint a judge of the Supreme Court to conduct a lengthy, formal investigation, with High Court powers to seize your phone, personal records, official documentation and interview you under oath, to see if you’re lying to us. Meantime, let’s carry on.”

Ministers for justice receive security briefings from the Garda (though not always from the commissioner personally) on a regular basis, perhaps a couple of times a month. On occasion, where particularly important or sensitive matters (perhaps relating to terrorist or subversive threats), the taoiseach attends.

These are normally strictly official matters – political staff don’t attend, a recognition that the matters discussed are regarded as above politics.

They are – or at least have the potential to be – matters of life and death. At the very least they involve the most important duty of any government – the safeguarding of the State and its citizens.

The relationship between the political and security leadership has to be, according to people who have been part of these meetings, “based on absolute trust”.

The politicians have to be able believe 100 per cent what they are told by the Garda.

According to a number of senior people in Government and Opposition, that trust no longer exists.

The Government’s actions in setting up the commission of investigation (after it had initially asked another judge to tell it whether there were grounds for an inquiry) are testament to that. The clue is in the name.

The expressions of confidence in the commissioner that reporters regularly wring from the Taoiseach and his Ministers are in fact conditional, formulaic.

It’s difficult to blame them. The succession of scandals in the Garda, from Donegal onwards, has shown that typically the corporate and managerial response of the force has been to overlook, bury, deny and then dismiss problems caused by instances of Garda malpractice – whether that be wiping penalty points for their chums or the more serious failures in law enforcement that have adorned commissions, inquiries and tribunals in the last decade and a half.

In the case of McCabe, those denials have been accompanied by a campaign to blacken and vilify him.

Whether O’Sullivan or her predecessor, Martin Callinan, were responsible, involved or aware of this is a matter the commission of investigation will consider. But few people aware of the details of the McCabe saga seriously doubt that such a campaign took place.

The jaw-dropping revelations about the false claims of sexual crimes made against McCabe may of course be an amazing coincidence.

To many people, they will look like an extension of the campaign to destroy the whistleblower. That is certainly how they appear to many people in Government.

Given this view of Garda actions in Government, it is not surprising that trust has evaporated. But that is no minor thing.

In fact, it represents a major crisis at the heart of our State and system of government.

If that is so, it requires a much stronger and more thorough response from Government than has been evident so far.

These are serious issues, well beyond the petty foostering of a lot of politics.

They deserve to be taken seriously. You only have to look across the Atlantic to see what happens when people don’t take government seriously.

It requires a completely new type of leadership within the Garda to lead a new type of culture in the force. A single outsider at the head of the Garda is probably not the answer – too easy to work around.

Instead, the force and those to whom it answers to in Government need to grow their reformers from within, drawn from a new generation of leaders who have entered the force in the last two decades.

It needs to deal with its own bad apples publicly, ruthlessly and relentlessly. It needs a fresh start, a complete break with the culture of the past.

It is difficult to see how the Garda Síochána can do that while its leader is under investigation.

It’s also difficult to see any appreciation of this in Government. That being so, further trouble surely lies ahead.