Labour faces a real battle to win back voters, but no one seems to be fighting it 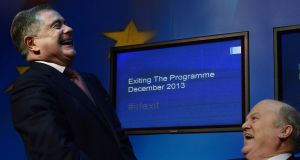 Brendan Howlin and Michael Noonan in 2013: Howlin is “a politician of government, not one of opposition”. Photograph: Cyril Byrne

Strange times indeed. Stephen Donnelly has shimmied across the Opposition benches to Fianna Fáil. Mary Lou McDonald is making eyes at Fianna Fáil and Fine Gael, a bit of flirting that initially and inexplicably aroused the momentary interest of the Taoiseach.

And there’s Brendan Howlin, leader of the Labour Party and quintessentially a politician of government, declaring that Enda Kenny should forget about the St Patrick’s Day trip to Washington, a position too bolshie even for Sinn Féin.

The practical difficulties of operating with just seven TDs shouldn’t be underestimated. Shorn of money, organisational capacity and media space, Labour is a shadow of its former self.

But serious as those problems are, Howlin has a bigger problem: his party does not seem to have a compelling and unique vision of what it is for. What is the purpose of Labour? How is it different? And how can it remake the future of Ireland?

When the history of the times comes to be written, this chapter will be called The Desperation of Brendan Howlin.

Howlin was probably the best minister in the last government, demonstrating toughness and skill, judgment and bravery. He probably had the hardest job, too. You only have to look at the dreadful state the current Government is in on public sector pay to appreciate the extent of Howlin’s achievement in keeping industrial peace while getting more for less from the public service.

But at this stage of his career, he is a politician of government, not one of opposition. Whatever his political skills, he lacks the edge and anger that make for really effective opposition, as his predecessors Eamon Gilmore and Dick Spring demonstrated in their time.

Howlin had to be persuaded to take on the leadership, and only did it because he agreed with his colleagues that Alan Kelly couldn’t be trusted to run the party. Presumably, the laws of politics will assert themselves eventually, and Kelly will come for him. But in the meantime, he and his party are struggling for relevance and for definition.

Talk to Labour people and they will acknowledge much of this. But they will also point to the fact that Howlin’s real battle is in the seven or eight constituencies where the party lost seats and where it can rebuild with the former TDs who lost their seats. Aodhán Ó Ríordáin, Ged Nash and Kevin Humphreys are all now in the Seanad. Joanna Tuffy in Dublin West, Derek Nolan in Galway, Michael McNamara in Clare and a few others will be the party’s future, if it is to have one.

They say they hope to rebuild the party by winning these seats back and getting their numbers of TDs into the mid-teens, something resembling Labour’s historic level. Then they can think about the next phase. And there is a lot in that approach.

But it’s hard to see it happening without a strong national presence and a distinctive message, and that is something the party doesn’t have right now.

How many voters could tell you something that Labour has done or said in recent weeks? Very few, I’d wager. That’s probably why Labour is taking unexpected positions, such as on the visit to Trump, to get noticed. But this is politics as a parlour game. It lacks authenticity. And voters can smell that.

Stephen Donnelly’s choice to join Fianna Fáil reflects his own ambition for power (not a crime in a politician; hypocrisy might be), but it is also testament to his judgment that Labour is going nowhere. You can see why he thinks that.

The party is rooted in the 4-6 per cent range in the polls. The average age of its TDs is 58; take out Kelly and Seán Sherlock and it’s 64. Last weekend, Labour’s 35-year-old chairperson Loraine Mulligan told her colleagues she wouldn’t stand again. Her putative replacement is Siptu boss Jack O’Connor (born 1957). They’re not getting any younger, are they?

It’s perhaps not unrelated that Howlin and his party talk too much about the past. Perhaps they have been unfairly blamed by voters for the austerity they imposed; perhaps not. It doesn’t really matter now. If there’s one thing that recent Irish political history demonstrates, it’s that voters are prepared to forgive more or less anything.

Luckily, Howlin has an example just across the Dáil chamber of a party which recovered from a position of universal contempt and electoral annihilation, And in a relatively short time, too.

Fianna Fáil’s apology and confession of its past sins were nowhere near as comprehensive or sincere as it got everyone to believe. But it was effective. Then the party chose its ground (centrist, social democratic) and occupied it doggedly. It also focused relentlessly on the medium-term future, ignoring the day-to-day ups and downs.

Politicians are rightly wary of the advice of disinterested political observers that have no skin in the game and for whom being proved wrong has few consequences. But translated, all of this means: 1. Get over yourselves. 2. Decide what you’re for, in one sentence. 3. Stop talking about the past.

That might not work. But the current plan doesn’t seem to be working either