Pat Leahy: Election 2020 is set to reorder the political landscape 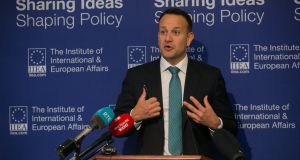 The biggest issue in Irish politics in the last three years has raised barely a whimper in the general election campaign. Much to the frustration of Fine Gael, which regards Brexit as something akin to its finest hour, the subject has hardly been raised on the doors or in the debates. What the government party had hoped to be its strongest card has been – so far – an irrelevancy. But – and I wince as I write these words – Brexit will be as least as big an issue for the next government as it was for this one. For the people at the top of government, Brexit will command more of their attention than health or housing.

How noble, then, of Fine Gael to schedule the election during a lull in the Brexit process, rather than when the negotiations have resumed full throttle – as would have been the case in May. For now, Brexit is neither an immediate issue confronting the government, nor a point of political contention between the parties. As a result, the voters seem magnificently untroubled by it. You can make up your own mind as to whether this was Fine Gael’s true intention.

But the Brexit armistice is temporary, and it is soon coming to an end. According to Cabinet papers circulated this week, the European Union may circulate a draft negotiating mandate as early as this weekend. Negotiations will begin in March, and at a spanking pace, too – four rounds before July, with 10 separate “workstreams”, the Cabinet papers explain, in each round. Each week of negotiations will be preceded by a week of consultation with member states and the European Parliament, and followed by a further week of reporting back. Some of the early battles, say people familiar with the preparations, will be over fisheries. It is all, I expect, going to get pretty bruising, pretty quickly.

While the present government will be legally in place until it’s not, politically there will be requirement that the people who might replace it agree with the “difficult decisions” that Coveney talks about. Eamon Ryan, who has as great an expectation of being part of the next government as anyone else, has already made this clear to Coveney.

It would be very much a surprise if Micheál Martin – who does not find the recent slights of his foreign policy experience by Fine Gael one bit amusing – did not share that view. Same goes for Sinn Féin, whose interest in how the North is affected by Brexit is obviously acute.

Securing that consensus might be harder than the Government thinks. The Government Buildings view is that it kept the Opposition entirely in the loop about the first phase of Brexit; the Opposition’s view is quite different. They feel they were told things after they had happened (and sometimes after the media). At the very least Brexit will complicate the government formation process. Don’t be surprised if Leo Varadkar cites is as a reason for a grand coalition.

Which brings us neatly to the progress of this fascinating general election campaign, now entering the home straight. Weekend and early-next-week polls will give us an indication of whether there has been any move back towards Fine Gael after a difficult first fortnight. All I can say – before those polls, obviously – is that if there is a move back, then I see little sign of it. That doesn’t mean it can’t happen. But it does mean its likelihood is diminishing.

And diminishing fast if a pretty extensive round of soundings among all parties this week is to be believed. Even Government sources – at all levels of Fine Gael and elsewhere – acknowledge that they are having a difficult time on the doors. The level of unpopularity that Fine Gael has achieved is very, very significant. If that does not change, Fine Gael is in for a very difficult day when the votes are counted tomorrow week.

I see two other trends whose interplay will shape the final week. The strength of Sinn Féin at this point in the campaign is very real. While there are precedents to believe some of that support may bleed away in the final week, there are also reasons to expect that for some voters at least, this time is different.

Sinn Féin has reached into parts of the electorate that were previously barren territory for it. How many of these voters are scared off by the avalanche of warnings about its economic policies and violence-supporting past – which are surely to arrive from Fine Gael and Fianna Fáil in the coming days – will be one of the most important factors in the outcome of the election. Sinn Féin’s performance is now at the very heart of the outcome in this fascinating election, which promises to reorder once again the Irish political landscape.

The other question is related: the ultimate destination of all those “change” voters. Some weeks ago, I wondered whether this would be a “change election”; I think that question has been definitively answered now. On the doors, in the polls, in the focus groups – that message keeps coming up. Where these change voters alight next Saturday will decide the eventual winner and the balance of power in the next Dáil.