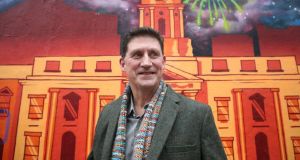 Green Party leader Eamon Ryan. “The Greens are in the hunt for 10 seats or so, and could well do better than that if a wave comes their way (possible but not yet probable).” Photograph: Nick Bradshaw

If there is going to be a decisive swing in favour of any of the parties in this general election campaign, it should be well under way by next weekend. The campaign feels poised for such a move – but in what direction?

As predicted, the coalitionology started in earnest this week, prompted by the polls and turbocharged by Leo Varadkar’s declaration in Tuesday’s televised debate that he could do a coalition deal with Micheál Martin. The Fianna Fáil leader rebuffed it, correctly discerning a Varadkar tactic to deny him the precious mantle of change. But he can’t stop Varadkar from continuing to make the offer.

With the sense of entitlement – arrogance, in the eyes of their opponents – that comes with having shared the business of government exclusively between themselves for a century, Fine Gael and Fianna Fáil assume that they will be the ones to decide who goes where and with whom. As things stand, they will. But that is only because the other parties allow them to.

In a week of fairly extraordinary statements, one by the co-leader of the Social Democrats, Róisín Shortall, stood out for its fatalism.

According to Marie O’Halloran’s report for The Irish Times, Ms Shortall said she believed “there is huge potential for parties of the centre left to work together” and form a government to end the “Civil War” politics of either Fine Gael or Fianna Fáil always in government.

But the possibility that it would happen in this election was remote, she lamented. “I’d have to say it’s unlikely at this stage,” she said. Maybe at the election after this one, she ventured.

Sure, what’s the hurry?

No votes are cast or counted yet, but a block of Green and centre-left TDs could – if they were prepared to act together in a coherent and disciplined manner – transform the government-formation process and in doing so direct the shape and content of the next administration’s programme for government.

(This is not, by the way, to endorse such an action, merely to point out its possibility, if the relevant participants were prepared to do what was necessary.)

There are three steps, as I see it. First, maximise the votes for the Green Party, Labour and other centre-left parties and Independent candidates. The Greens are in the hunt for 10 seats or so, and could well do better than that if a wave comes their way (possible but not yet probable). Labour needs to keep its existing seven, and win a few more. Maybe less likely, but hardly impossible. A few more centre-left TDs, of whatever guise, need to be elected. This is more likely.

Step two: strength in unity. The Greens and Labour need to come together – with as many others as possible – and, after the election but before the Dáil meets, negotiate between themselves a statement of agreed principles and policy objectives.

Step three: negotiate – as a single entity – with both Fianna Fáil and Fine Gael, pitting the two against one another and agreeing with the highest bidder a programme for government that achieves as much of the statement of agreed principles and policies as possible. (You could equally make the argument they should do it with Sinn Féin too, but Mary Lou won’t have the numbers. And it is a numbers game.)

Not perfect, of course. Requiring discipline and a firm commitment to stick with the compromises required no matter how unpopular they are in some quarters. But if they want to do it – and once the Dáil numbers add up, it is purely a matter of political will – Labour, the Greens and whoever comes along for the ride could deliver the most left-wing and environmentally activist government in the history of the State.

The coming weeks will set the course for the next few years of Ireland’s story. For anyone who wants to shape that story, it’s time to step up

I get it that the prospect of government fills many Labour party members with dread. There will be – as the quixotic thoughts of Mayo candidate Saoirse McHugh make clear – Green party members who become queasy at the thought of being in government with either Fine Gael or Fianna Fáil.

But that’s because they’re thinking about themselves and their party first, not about the country. Fair enough. But they should make that clear to voters before the election. Often, the refusniks in Labour and the Greens speak of “propping up” a Fine Gael or Fianna Fáil government. And that would be an unwise position for anyone to be in. But if they are interested in participating in government to achieve some of their political objectives, they may never get a better chance.

Well, one of the things the most vulnerable are most vulnerable to would be a sudden economic crisis which required – as the last one did, and the one before that – the State to reduce its spending. Then, as before, the people who would suffer most are those which depend most heavily on the State. If you want to do something about that, the best place to be is in government.

The crucible of political choice now approaches, not just for voters, but for the politicians and parties who are shortly to receive their five-yearly set of instructions from the people they serve. The coming weeks will set the course for the next few years of Ireland’s story. For anyone who wants to shape that story, it’s time to step up.

1 UK to close borders to non-English speakers and unskilled workers
2 New Sinn Féin TD apologises for ‘glib, off-the-cuff tweets’
3 Draining the swamp? Trump in spree of clemency for rich white men
4 A Russian cruiser with ‘cannibal rats’: What other ‘ghost ships’ could be out there?
5 Memo to Sinn Féin: Not ‘Southern State’ or ‘Free State’, the name is Ireland
Real news has value SUBSCRIBE