Papal duty: Benedict XVI intervention raises question of what to do with a retired pope 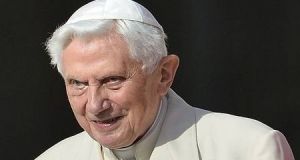 Former pope Benedict XVI: Was it a mistake to allow Benedict retain the title Pope Emeritus and continue to wear the white cassock peculiar to popes? Photograph: Getty Images

And lo, it has come to pass! Former pope Benedict XVI has directly intervened in church affairs in an overt attempt to frustrate a decision his successor may be about to announce next month.

In February, or shortly thereafter, Pope Francis will respond to a recommendation by South American bishops from the Amazon region – following a synod in Rome last October – that married men be ordained priests for service in remote regions.

The fear of conservatives in the church is that Pope Francis may be about to accede to that recommendation, ending in principle the Catholic Church’s centuries-old mandatory celibacy rule for priests.

In a new book, From the Depths of Our Hearts, written with conservative Cardinal Robert Sarah, Benedict strongly defends the mandatory celibacy rule for priests. Excerpts from the book (to be published on January 15th) were released to the website of conservative French newspaper Le Figaro last Sunday.

When he resigned seven years ago in February 2013, Benedict said his intention was to “devotedly serve the Holy Church of God in the future through a life dedicated to prayer”. Yet he has not been content to do so.

Since resigning he has given interviews, written articles and contributed to books, breaking his pledge to just pray. He has offered support to those conservatives in the church who oppose changes mooted by Pope Francis with ever-increasing ferocity.

And, as in the new book, he has done so as “Benedict XVI”.

The first pope to stand down voluntarily since Celestine V in 1294, 719 years previously, he retained his papal name as Pope Emeritus Benedict XVI, and continues to wear the white cassock peculiar to popes. In retrospect it was a mistake he was allowed do so.

But there is more than a suggestion of an éminence grise at work too on this occasion. Almost three years ago, in March 2016, the ailing Benedict (he will be 93 in April) was described by a Vatican spokesman as “slowly, serenely fading” physically, while his mental capacity remained “perfectly lucid”.

A regular visitor to Benedict at the Vatican is Cardinal Sarah (74), to whom he is close theologically. From the former French colony of Guinea in West Africa, Cardinal Sarah received the red hat from Benedict in 2010, though appointed prefect of the Vatican’s Congregation for Divine Worship and the Discipline of the Sacraments by Pope Francis in 2014.

Since then Cardinal Sarah and Pope Francis have had a fraught relationship. In 2016, the cardinal asked all Catholic bishops and priests to begin celebrating the Mass ad orientem (with their back to the congregation) “wherever possible”, and recommended that people receive Communion while kneeling, as was done prior to Vatican II.

He was called to a meeting with Pope Francis, after which the Vatican issued a statement saying Cardinal Sarah had been “incorrectly interpreted”.

In 2017, the cardinal was criticised by a Vatican spokesman for using the phrase “reform of the reforms” to describe his attempts to row back on changes recommended by Vatican II.

However, he continued to advise that Catholics receive Communion only on the tongue and while kneeling, and other pre-Vatican II practices for conduct of priest and the faithful during the Mass.

This latest intervention by Benedict, whether by intent or manipulation, raises the fundamental question – what do you do with a retired pope?

An explanatory note, attributed to Cardinal Sarah, specified that his congregation’s final approval would still be necessary for such translations.

In October 2017, the Vatican published a letter Pope Francis had sent to Cardinal Sarah clarifying that his congregation would have only limited authority when it came to such liturgical translations by local bishops’ conferences.

Other clues to the cardinal playing the primary role in preparing and publishing From the Depths of Our Hearts is that it is written in French. All of Benedict’s 66 books were written in his native German, while his three encyclicals and four apostolic exhortations as pope were written in Latin, as is customary for popes.

However, this latest intervention by Benedict, whether by intent or manipulation, raises the fundamental question – what do you do with a retired pope?

Was it a mistake to allow Benedict retain the title Pope Emeritus and continue to wear the white cassock peculiar to popes? It would appear so. It lends an authority which can be abused.

It might have been better had Benedict simply become Bishop Emeritus of Rome, and taken the advice offered to retired bishops by former Archbishop of Dublin Cardinal Desmond Connell – “get lost”.

1 ‘I thought it was a hoax’: Patient dies after Texas Covid party
2 Maureen Dowd: Biden has his limitations but he’s no Trump
3 White House turns its fire on Anthony Fauci over Covid-19 comments
4 Quarantine process to be tightened as health officials grow nervous
5 Dirty money: How the Mafia plundered Italy’s public health system
Real news has value SUBSCRIBE