Rite&Reason: RIC issue a test of how we work Belfast Agreement

Atrocities must never be commemorated but one-perspective narratives are propaganda 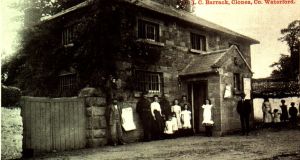 Royal Irish Constabulary barracks in Clonea, Co Waterford: historians have suggested the 1919-1921 conflict was in many ways an Irish civil war.

“The Royal Irish Constabulary is a body of Irishmen recruited from the Irish people; bone of their bone and flesh of their flesh. The typical young constabularyman is Irish of the Irish; Catholic, and (as the word goes) Nationalist; the son of decent parents; his father a Home Rule farmer . . . his uncle a patriotic priest; his sweetheart the daughter of a local Nationalist district councillor and patriotic publican. He is smiled on by the Irish clergy; he is smiled on by the Irish girls; he is respected by the young fellows of the street corner and the country crossroads.”

To judge by the begrudgery currently displayed towards the very memory of the RIC dead, most nationalists would probably presume the author to be a British journalist or, if Irish, either an unbigoted unionist or a very pro-British Home Ruler and shoneen. Wrong.

The article appeared in the United Irishman newspaper edited by Arthur Griffith, neither unionist nor shoneen, inveterate critic of Home Rule party moderation and founder of Sinn Féin.

Like other nationalists, he was well able to distinguish between the constable who was one of their own and the British government. The RIC had not been targeted by the Fenians and in 1914 requested (in vain) to become a disarmed constabulary.

It was something new and shocking when republicans shot RIC men at Soloheadbeg in January 1919. The universal condemnation it elicited was as strong and absolute as that elicited in the 1980s by Provos shooting gardaí.

As is well-documented, the 1919-1921 conflict witnessed atrocities committed by IRA members and RIC members. The historical record gives no support to “holier-than-thou” posturing or virtue-signalling by partisans of either side.

Let the one without sin . . . cast the first stone.

Recently, historians have suggested that the 1919-1921 conflict was in many ways an Irish civil war. If official commemoration is to be extended only to one side, it means we have not come to terms with it as civil war.

Nobody proposes honouring atrocities. Thus, in the commemoration of IRA Volunteers it is presumed that acts of atrocity are not being commemorated.

It is depressing then that no similar presumption is being allowed to the many thousands of Irish dead of the RIC and the Dublin Metropolitan Police (DMP): no non-judgmental commemoration for them, no philosophy of “the-grave-covers-all-feuds” allowed in their case.

It is mean. It lacks the sympathy for the defeated Xerxes and the Persians expressed by the Greek enemy playwright Aeschylus in his play The Persians. Like the dead in the village graveyard in Máirtín O Cadhain’s Cré na Cille, it nurses the bitterness and begrudgery, never to be forgotten.

Modern historiography makes it clear that there is always more than one historical perspective. Serious historical work needs all perspectives to understand and explain. A one-perspective narrative risks amounting to little more than official or populist propaganda.

Modern historiography makes it clear there is always more than one historical perspective. Serious historical work needs all perspectives to understand and explain

As well as making for better history, it is a matter of justice that voices once systematically ignored or silenced be heard. The voices of women, people of colour and homosexuals were once marginalised. Such power-manipulation of the historical narrative goes beyond unfairness and silencing to effective exclusion from the political community.

We cannot undo the suffering or the injustice visited upon the dead generations. But we are not the prisoners of the past: we can choose how to remember and commemorate.

If those who suffered at the hands of the RIC in Cork and Balbriggan can be commemorated, we can choose to commemorate unarmed DMP constables shot dead at point blank range by Irish Citizen Army members in 1916.

If we remember women assaulted by the Tans, we can choose to feel for RIC wives and children traumatised by the boycott

If we remember women assaulted by the Tans, we can choose to feel for RIC wives and children traumatised by the boycott. If we wax indignant at Irish revolutionaries like John Mitchel being exiled, we can choose to let ourselves feel embarrassed that so many demobilised RIC men and their families felt their native land was not safe anymore and fled to Northern Ireland and other far, foreign fields.

In the dark days of the Provos’ “30 years war” we wondered if Ireland would ever be capable of redemption from tribal hatred and violence. The 1998 Belfast Agreement was the God-given window of opportunity to work towards that.

For southern nationalists, the RIC commemoration issue is a test of how we are working it. If we cannot acknowledge and re-admit to the nationalist community those whom Griffith recognised as belonging to it in 1902, what hope is there that we can embrace northern unionists in a united Ireland?

God gives grace for conversion. But, as Dietrich Bonhoeffer remarked, God’s grace does not come cheap.