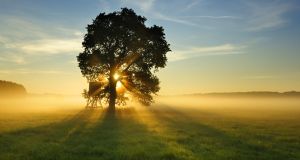 May 29th was celebrated (by royalists at least) as Oak Apple Day, the purported anniversary of an event in which King Charles II avoided capture by Cromwellians. Photograph: iStock

In England for centuries, May 29th was celebrated (by royalists at least) as Oak Apple Day, the purported anniversary of an event in which King Charles II narrowly avoided capture by Cromwellians during the English Civil War.

Fleeing from defeat at the Battle of Worcester in 1651, he and an ally (the colourfully named Major Careless) climbed an oak tree at a place called Boscobel and hid among the foliage while the Roundheads searched beneath.

The king spent a whole day up there, even falling asleep for a while.

As he told the diarist Samuel Pepys, one of the Cromwellians passed directly below him at one point. But somehow his cover was not blown.

So years later, having retained his head (unlike Charles I) and regained the monarchy, he made the date of the restoration – May 29th, which also happened to be his birthday – a public holiday.

Although the escape had happened in September, the tree incident then became synonymous with the celebration.

The latter was popularly known as Oak Apple Day, after an apple-like growth that appears on many oaks, including the one that saved the monarch. As for the tree itself, that came to be called “The Royal Oak”, which in turn evolved into a common name for English (and some Irish) pubs.

Royalists showed their colours every May 29th by wearing a sprig of oak, complete with its “apples” (actually a kind of benign growth in the wood). And if you didn’t wear them, as with the latter-day Poppy, there could sometimes be consequences.

These were mostly harmless, it seems. In fact, the current fashion in England for throwing milkshakes at political opponents may be a distant echo of the aftermath of that earlier civil war, when non-wearers of the oak apple were liable to be pelted with eggs or nettles.

In some places, they might also suffer the indignity on being pinched on the bottom.

Hence “pinch-bum” day, another name given to the occasion.

The celebration was still going strong a century later, but it can hardly have had anything to do with the “Oak Boys”, an Irish agrarian movement of the 1760s, which is still filed alongside Oak Apple Day in Brewer’s Dictionary of Phrase and Fable.

The “Hearts of Oak”, as they were also known, originated in the same part of Ireland as the later Orange Order, Armagh.  They were, however, what would now be termed a cross-community movement, comprising Catholics, Protestants, and Dissenters. And their grievances were mostly fiscal: cess, tithes, and other local taxes they thought excessive.

In time the original Royal Oak became a victim of its own fame. It was too popular with souvenir-hunting patriots, who tore strips off it until it died, sometime in the 1800s. The May 29th celebration gradually died off too, although it may still have echoes in places today.

The tradition lives on now mainly in the pub name, which was to achieve a certain infamy on this side of the Irish Sea during the 1880s. For a period then, the best-known Royal Oak pub in these islands was one on Dublin’s Parkgate Street.

It had been a meeting place for the so-called “Invincibles” who, on another May day, in 1882, assassinated the British chief secretary, Lord Cavendish, and his deputy on the main road of the nearby Phoenix Park.

The bar featured prominently in evidence at the murder trials that were reported around the world in 1883, and that resulted in the hangings at Kilmainham Gaol of five men, as well as the assassination of the informer, James Carey, and finally the execution of the man who shot him.

That Royal Oak pub is long gone, at least in name. One of more recent vintage, in Finglas, has also now disappeared. But there remains at least one pub of the name still functioning in Dublin, just around the corner from where I live in Kilmainham, not far from the aforementioned gaol.

I doubt if the Kilmainham Royal Oak is a hiding place for monarchists these days. In fact, it wouldn’t be a great hideout for anyone, because it’s one of Dublin’s smallest pubs. You couldn’t swing a Fine Gael TD in it – not safely anyway.

Nor are there any actual oak trees in its immediate vicinity.  But the pub does have at least one other striking resonance with the 1650s, enough perhaps to make a visiting English royalist shiver.

Just down the street from it, not much more than a stone’s throw, is an alleyway called “Cromwell’s Quarters”.

1 Rob Delaney: ‘As my career took off, my son got sick...then he died’
2 State subsidises public sector retirees to cover gap until State pension
3 Who are Ireland’s 17 billionaires?
4 52 places to go in 2020: Here’s where the New York Times says you should visit
5 Fintan O'Toole: Safety-first politics has had its day
Real news has value SUBSCRIBE