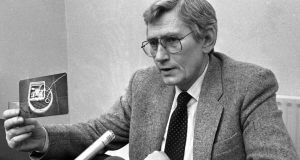 Seamus Mallon in 1984 holding up a picture taken of the bugging equipment found in the house in Dublin where he stayed occasionally. Photograph: Kevin McMahon

Reading Seamus Mallon’s new memoir, A Shared Home Place, has transported me back to my short but educational career as a hitchhiker during the mid-1980s. The upside of all the hours you wasted standing on roadsides then was that the people who eventually gave you lifts could often be great company.

Among these, once, was a man called Mackie Moyna, who features in Mallon’s book for one of two interesting stories he told me.

That one had made him the subject of national newspaper headlines shortly before we met. But the one not in the book was from the 1940s and concerned a subject of intense mutual interest: Monaghan football. In fact, I think the occasion of the lift was also football-related: the aftermath of an Ulster Championship first-round win over Donegal in Castleblayney in 1985, at the start of what would be a heady summer.

Anyway, as we basked in the afterglow of victory that day, on the way back to Dublin, Mackie recalled his experience of a playing as county minor in 1945. He had been in exile at the time, at boarding school in Dundalk, so declared for Louth in the Leinster Championship until they got knocked out. His identical twin Tommy, meanwhile, was a member of the Monaghan team that won Ulster, qualifying for a rare All-Ireland semi-final against the even bigger underdogs of Leitrim.

Alas, early in the Leitrim game at Croke Park, Tommy broke his wrist and was to play no further part. Or was he?

Although precluded from selection by his involvement with Louth, Mackie was lurking near the Monaghan camp, and his talents were now sorely needed by a county with only a small pick. So an obvious ploy suggested itself. The injured twin’s jersey was transferred to his brother at half-time and a bandage added to the corresponding wrist.  Then Mackie went out to play the second half.

Not even his parents recognised it was him. And the secret was successfully withheld from a clerical member of the backroom team who it was decided could not be implicated. Unfortunately, the crime didn’t pay. Leitrim won – a remarkable thing in itself – earning a place in the All-Ireland final and the right, as it turned out, to be hammered by Dublin. Some things never change.

The other story Mackie told me that day, and the one that does feature in Mallon’s book, might have had very serious consequences. It had happened much more recently and involved the bugging of his house in north Dublin, at a time when Mallon – an old friend from their football days – was a regular guest.

Not being a journalist in 1985, I didn’t take notes, so I’ll stick with the account from the book, which, by the way, was co-authored by my then future, and now former, Irish Times colleague, Andy Pollak.

The bugging occurred during the New Ireland Forum of 1983-4, when the Republic’s political parties and the SDLP were discussing possible solutions to the Northern Troubles. And on hearing over the phone that Mackie had found a listening device in his home, Mallon told him “don’t touch it” (it was too late) and drove straight from Armagh to Dublin to investigate.

The SDLP man never found out whether he himself was the target, or whether the listeners were more interested in certain younger relatives of Mackie’s, whose politics veered towards the militant side of nationalism. Either way, Mallon was furious with the then-taoiseach Garret Fitzgerald, for the way he dealt with it:

“FitzGerald, speaking in the Dáil, lumped together the Moyna bugging with representations I had made, as one does as a public representative, about another Moyna nephew who failed to get a job in the Irish public service after he’d been convicted of taking part in a riot outside the British Embassy in Dublin during the hunger strikes: guilt by association. I thought that beneath him: it was not the action of ‘Garret the Good’.”

He was not the only one questioning Garret’s saintly credentials. The incident also inspired this newspaper’s Conor O’Clery to adapt Conor Cruise O’Brien’s acronym about for Charlie Haughey, GUBU. “Garret’s Usual Balls-Up” was the O’Clery version.

And according to the book, the balls-up almost brought down the government. A senior official told Mallon that FitzGerald “felt he had behaved badly towards me and was close to resigning over it”.  In the event he carried on, although I recall Mackie (who died in 2017) saying that the taoiseach felt so badly towards him as well that he had offered to come out to the house and apologise in person.