Una Mullally: It’s okay to feel sorry for Maria Bailey and Theresa May

Wincing at Theresa May crying doesn’t make you a Tory, it makes you human 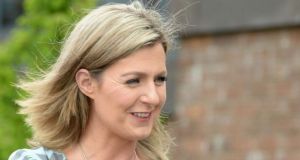 I have wondered what kind of week Maria Bailey is really having. I’m not sure how someone could cope under such a relentless media pile on

There probably shouldn’t be a hierarchy of sympathy and empathy, but there is one. Our empathic responses are based on our socialisation, identities, and in-groups. We tend to reserve it most for those we deem to be “like us”, which is why, for example, a person of the same nationality to us being killed in an accident abroad feels more profound and relevant to us than someone of a different nationality dying in the same accident. We may gain satisfaction from someone we don’t like experiencing emotional pain, for example, yet feel a great deal of empathy when someone we identify with is hurting.

Working on extending empathy beyond our own little worlds is very worthwhile exercise, especially at a time when public discourse is vitriolic and when it often feels as though empathy is being eroded. But who decides who is deserving of sympathy and empathy in public life, particularly if those public figures have done something we dislike , yet are still apparently suffering?

Theresa May choking up at the end of a farewell speech was painful to watch. Yet those who don’t like the Tories instructed people not to feel sorry for her, considering the ills she wrought are far greater than the pain she feels. That’s true, of course, but it’s not an either/or situation.

You can simultaneously wince at seeing May choke up, and still be livid and upset about the countless people who suffered under her leadership.

Criticising people for having authentic reactions - “I feel sorry for her” - and imposing a criteria for emotional reaction is not practical, or human. People - lets say “we”, empathically - who despise racism, for example, make demands for empathy from racists. We want them not to demonise swathes of people but instead see people through the common denominator of humanity, to see individual and complex lives, not just ethnicity or race or religion. It cuts both ways. If we demand empathy from people who hate other people, then shouldn’t we extend empathy to those we dislike too?

I have wondered what kind of week Maria Bailey is really having. I’m not sure how someone could cope under such a relentless media pile on. One of the interesting aspects of Maria Bailey’s disastrous interview on Sean O’Rourke’s radio programme on Monday, is how she positioned herself as a victim; that legal documents were leaked, that this was a personal matter thrust into the public domain, that somebody (who she wouldn’t identify - a rival political party or politician? A journalist?) was out to cause her and Fine Gael maximum damage, that there were journalists and photographers outside her house, that she and her family were hounded, that she had to work from home, that she was the injured party - physically and emotionally - that she was the subject of clickbait journalism, that “keyboard warriors” were out to drag her down.

Is it possible to feel sorry for Bailey in terms of what she is experiencing, and simultaneously view her misfortune as completely of her own making. As always with political gaffes, they only really gain the type of jet-engine-fuelled momentum that we’ve seen with Bailey’s now dropped insurance claim, if they encapsulate a broader public sentiment. Bailey has inadvertently tapped into the zeitgeist. There is growing public unease and anger with what can be characterised as a Fine Gael attitude that is privileged, entitled, out of touch, and indeed gaffe-prone.

The same things that drive tragedy, drive really juicy news stories; irony, coincidence, hypocrisy, context. These are the fundamentals of good storytelling, from Shakespeare to The Star. For journalists, this sense is intuitive. A male politician is caught in bed with a male sex worker. That’s a sensational story, but maybe not in the public interest. But what if that politician had spent his life trying to pass laws limiting LGBT rights? Gold! A TD doesn’t speak Irish. Who cares? But what if that TD has just been made a spokesperson on Gaeltacht affairs? Bingo!

Those may be hypocrisies, but there’s also the stories that confirm and compound our suspicions, the “just as I suspected” and “how typical” stories. This is where Bailey comes in, and it’s also why the reaction to her “story” is so big. Ultimately it is also disproportionate. Nobody would enjoy being at the centre of the maelstrom Bailey is, but what did she expect?

The personalised attacks against politicians run in tandem with the personalisation of politics, and how politicians use media to focus on personality and trivialities over policies and substance.

Yet empathy should not be positioned as ideological. Feeling sorry for Joan Burton being trapped in a car, while simultaneously being disgusted by Labour’s collusion with neo-liberal austerity policies does not make you an establishment shill. Thinking that protesting outside Simon Harris’ family home is tacky and crosses a line, does not mean you don’t care about elderly people on trollies, nor does it mean you don’t understand the difference between the perceived danger of individuals protesting and the structural and systemic danger of a broken health service. Wincing at Theresa May crying doesn’t make you a Tory, it makes you human. One can simultaneously “feel for” someone “on a human level”, and also hold their broader actions to account. These things are not mutually exclusive. The main thing is to not prevent yourself from feeling something at all - or to pretend you don’t feel something based on ideologies - because feeling something is the most authentic, human response that we have.