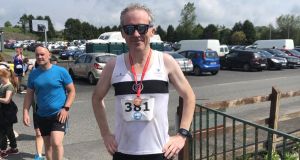 For the first half of what Sky Sports would have called my “Super Saturday”, I had to run the River Moy Half Marathon, a race that begins and ends in the Mayo town of Ballina each May. This had seemed like a good idea when I agreed to it, months ago, in a pub. Now, at the starting line, I was having doubts.

It had been several years since my last half marathon and I hadn’t enough mileage done. But unjustified optimism springs eternal. So noting that the range of pacemakers included a 1 hour 40 minutes man, and remembering I had finished in that general neighbourhood once, I positioned myself behind him and hoped for the best.

It was not a good omen when, after about a mile, one of the pacer’s two marker-balloons burst. “Jesus – there goes the right engine,” I quipped to the runner next to me (who looked back blankly because, like too many people these days, he was wearing earphones).

But the pacemaker was unaffected. In fact, his back-up balloon functioned all too well, remaining visible to me long after I relinquished hopes of keeping it company. Then, finally, it disappeared over the horizon.

For a while, I was able to console myself that we were probably still in the same townland, at least.

Near the half-way point, however, a massed patter of rubber-soled feet announced the arrival behind me of the 1:45 man and his followers.  Sure enough, he swept past too, and I couldn’t stay with that pace either.

From there on, I concentrated on enjoying the scenery, of which there was plenty.

“Scenery” can be a euphemism in running events. It usually means hills – and indeed, despite following the Moy Valley, the course did manage to find a few of those.

But on the plus side, the Mayo countryside was in full bloom, with hawthorn bursting out all over.

There was also a lovely stretch through forest, where the higher oxygen levels anaesthetised the pain.

And then there was the human scenery – supporting bystanders or volunteers – which added greatly to the event’s charms.

Organiser Alan Murphy (the man who talked me into it in the pub) told me there were almost 100 official helpers: no small feat for a town this size.

There were well-staffed water stations every few miles.  More unusually, there was a traditional music station: a live duet supplying runners with jigs and reels to fortify them for the final miles.

Some of us needed all the motivational help we could get.

And as it happened, there was another surprise fillip, right at the end. I hadn’t been planning a big finish, to be honest – it seemed as much as I could to do to hobble home.

Then I heard the MC Aileen Horkan announce: “And here comes Frank McNally, Irishman’s Diary writer with The Irish Times”. The embarrassment was electrifying. I bucked up straight away and strode home, heroically, as if to the theme tune from Chariots of Fire. The illusion worked for me anyway.

Two hours and a litre of strong coffee later, I set out for Cavan and a certain Ulster Football Championship game: Super Saturday’s other main fixture. My phone GPS offered three different routes from north Mayo, none convincing, including the one I eventually took, which brought me through several places I had never heard of before. Who outside of Sligo knew, for example, that Ireland has a village called “Sooey”?

At several points along the tortuous route, I wondered if the road was leading anywhere, never mind Cavan. But despite the strange approach, a familiar foreboding gradually dawned. I knew then I was nearing Breffni Park. It had been 32 years since my native Monaghan lost a championship game to our ancient rivals there. Unfortunately, I was at it. The scars were still fresh.

By the time I reached Cavan on Saturday, the sky was ominous too. There had been heavy showers already, more threatened. So I bought a plastic poncho from a flag seller, and no sooner had I parted with the fiver she was charging than, as if to confirm every prejudice about Cavan sales techniques, the sky began to clear again.

There would be no more rain that evening: not the normal kind anyway. The downpour that accompanied my view of the game was instead metaphysical. It fell on my soul, which was badly waterlogged at the end. The poncho didn’t help any. Then I had to drive back to Mayo, where I arrived not long before midnight, with Super Saturday already giving way to Sore Sunday.